Well, we intended to stay for only two days in Marathon but it ended up being two weeks. The main reason was that Alizann needed parts for the get-home clutch (more about this later) and since we were buddy boating with them, we hung around waiting too.

Panchos Fuel Dock had the best rates by far of any place at $50/night including water and electricity. Panchos is a no frills working crab/lobster/fish dock with commercial boats coming and going at all hours and was centrally located in Marathon. It was to be a very safe haven for our two boats nestled side by side one another among the many live-aboard residents. The winds were expected to to blow over 20 knots for the entire next week. 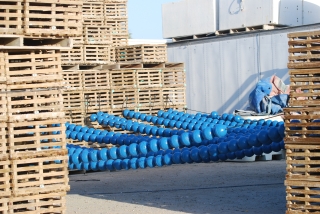 Only one problem, it was a tight fit for boats our size however and as we made the turn into the fairway leading to our slips, the patrons of the local bar/restaurant happily gathered on the top deck waiting to see a crash. Every boat owner also came out to nervously witness our maneuvers. Alizann went in first and with only inches to spare from her bow pulpit hovering over a sailboat bimini top, smoothly pirouetted and backed into her slip. Now it was our turn. With no time to get nervous, we began our backing approach too. Pivoting within our own length, our anchor cleared the tugboat on our bow by a foot. A massive concrete piling passed with only inches to spare from our stern dive platform. Lining up in the slip, Idyll Time eased her way backwards with only inches to spare on either side. Stopping just short of the concrete sea wall, we miraculously made it without touching anything. Think of the dancing hippos wearing a tutu in the Disney movie “Fantasia”and you get the picture. Suddenly the entire harbor broke into applause as we finished adjusting our dock lines. With the two boats looming large over the neighbors, we had caused quite a stir that was commented on for days. I fear the bar patrons were very disappointed that a crash had not occurred (isn’t that why people go to car races?) and quickly went back to drinking. Now we will have to figure out how to get out when its time to leave. 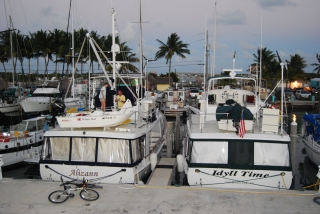 We visited later that first day the Marathon Municipal Marina and put both boats on their mooring ball waiting list (only $20/night) but we were not hopeful as they were completely full of winter boaters and nobody in a hurry to leave.

In the meantime,  we made daily bike trips to a local Cuban restaurant just up the street for strong sweet coffee many mornings after exercising and stopped several times for Cuban sandwiches after exploring Marathon by bike. 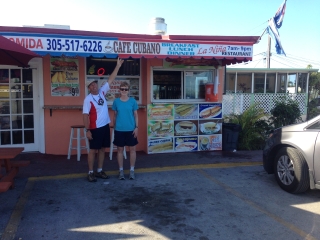 Every Wednesday morning most Krogen owners meet for breakfast at the Sunset Grill to discuss boating and Keys living. Putting a face to boat names was great and we received helpful local knowledge and tips to make our stay more enjoyable. 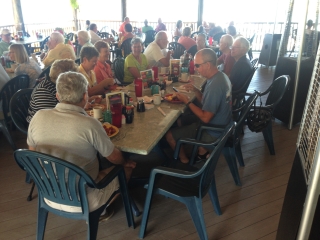 We learned that every day at 9:00AM a local cruisers network is broadcast on channel 68 VHF. New arrivals and pending departures are broadcast and in addition to announcing local events, a swap meet is held afterwards. There were over 200 boats in the Marathon Mooring Field with many more in surrounding anchorages so the Net is very helpful to local boaters.

A heavily used local landmark and a frequent morning walk for us was the Seven Mile Bridge. Originally built in 1930 by Henry Flagler to bring his railroad to Key West, it later served for years carrying car traffic from Marathon Key across Pigeon Key down to Big Pine Key until the concrete roadway was deemed unsafe. The center turnstile span was removed when a new bridge was completed . A two mile pedestrian section is open leading south from Marathon and terminates at Pigeon Key. The four of us made the four mile round trip morning walk while enjoying the elevated views of the Atlantic Ocean and Florida Bay. Frequently, we would spot rays and turtles feeding in the shallow grass flats. Afterwards, we stopped for Cuban coffee before returning to our boats at Panchos. This became a great way to start our day. 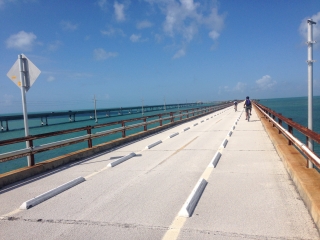 Pigeon Key, sitting under the Seven Mile Bridge, is now only accessible to tour by boat. The admission fee included a short boat ride and guided tour of the grounds and buildings. Henry Flagler used this Key for his construction base while building the railroad from Miami to Key West in 1930. At one time it was home to over 200 workers, mostly immigrants from Europe. Today it serves as a private camp teaching kids marine biology of the Keys. Taking this tour, we gained an appreciation of the history and hardships of undertaking this massive bridge project. 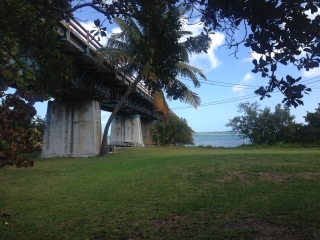 The Turtle Hospital in Marathon was a must stop for us. 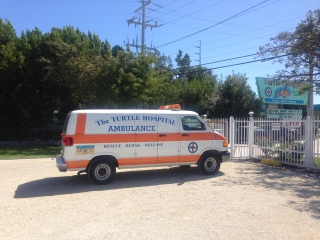 It’s one of only a few places in the United States that rehabilitates sick sea turtles. With over 30 patients, it is a busy place. They even have specially trained veterinarians doing surgery and health/fitness exams before releasing the turtles back to the sea. 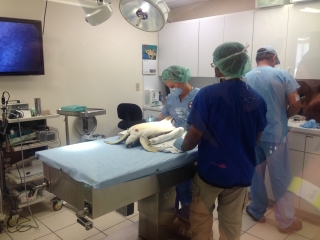 Some turtles have been so badly injured that they can not be released and are now permanent residence of the hospital. 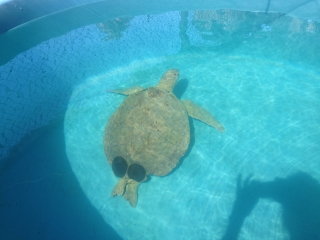 The Green and Loggerhead species are the most common type found on the Florida coasts.

We discovered that the Keys Bus Transit Company had a stop within walking distance near us and for $1.50/each person, we could ride the bus from Marathon to Key West, almost 50 miles. This was the best deal we had found in a while. We had been warned however to expect some local color aboard the bus. We were told the most frequently asked question aboard is “do you have any spare change and when did you get out?” We found that most of the riders were like us, boaters with a destination but no schedule. Along with the boaters, there were also some interesting locals but overall it was a fun trip. 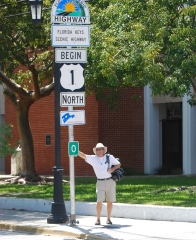 While in Marathon we got the chance to see some fellow Chattanooga boaters hiding out in the harbor for this winter. Kent and Jane have a PDQ power cat that they just bought. They are still getting used to their boat and enjoying the harbor life hanging on a mooring ball. Chuck, our next door neighbor at the Chattanooga Yacht Club, is the longtime captain of a 70 ft motor yacht named Master Plan. He keeps her in top shape while sitting at the dock in Marathon. It was good to see them all on this visit.

Marathon held its annual road race one Saturday morning. There were over 300 runner/walkers for the 15K,10K and 5K runs and a 5K walk with all fees going to the local food bank. After our event, Marty won a $25 gift certificate for seafood and Susie won 2 dinners at the restaurant across the harbor from our boats. 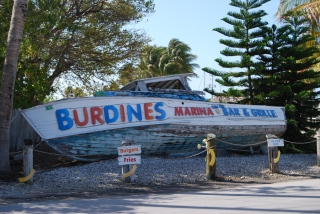 It couldn’t have been better as eating is a favorite pastime for the four of us. That’s why we bike everywhere to work off the calories. We even biked to the race.

On the subject of food, it was Susie’s birthday and to celebrate the occasion we went to a local seafood restaurant just 200 yards from our boats, Castaways, a local landmark. 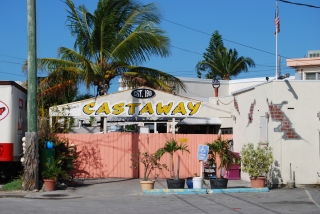 She noticed that they had Lion Fish on the menu and wanted to try it. Lion Fish are an invasive species and have become quite a problem for the Florida reef fish. Being a Pacific Ocean fish, the Lion Fish have no natural predators. Many SCUBA clubs have organized contests for spearing the largest and the most fish. The event ends usually with a fish fry. Susie enjoyed her meal while helping the Florida ecology. She said it was like grouper but sweeter and flakier. Now she wants to go spearfishing!  Suzanne surprised Susie with some homemade birthday cupcakes to cap off the evening. 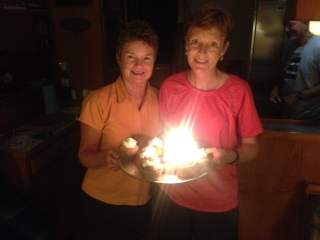 Panchos was quite a busy place. One day Suzanne and Susie dumped the kayaks overboard and paddled around. They spotted 3 manatees hanging around the fish docks trying to get a drink of fresh water. Fresh water is actually bad for them as it upsets their natural ability to absorb fresh water from the ocean. They have gotten used to looking for running hoses around the boats however and will come very close to you.

We thought that since Panchos was a lobster dock that getting fresh lobster would be easy. Wrong! The Chinese merchants in Miami have a contract with them and several other docks in Marathon. Whenever there’s more than 100 lobsters, the merchants send a special truck down and buy all the lobster available at $16/lb. They take them directly to Miami International Airport and ship them live to Hong Kong restaurants. Only once were we able to buy 5 fresh live lobsters. Since we didn’t have a contact, we only paid $8/lb. Isn’t America great.

Finally the clutch parts arrived and soon both captains, working together, had them installed while both Admirals nodded their approval after planning our escape. Several grocery store bike trips were hurriedly made as a brief weather window was forecast for several days.

We planned on using the empty slip directly across from us to make room for our exit. The slip had been vacant all week. 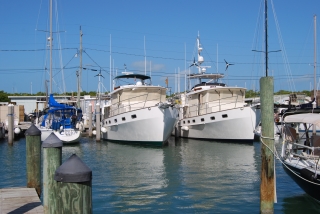 All of a sudden a 40ft SeaRay, full of drunk travelers out of Miami for the weekend, backs into it. With only 39ft from their bow to ours, we can’t leave until they do. I don’t think that they will be up at the crack of dawn. We amble over and have a nice chat with the captain and he assures us that he will leave tomorrow mid morning. Yeah right.

Well, mid morning arrives with no sign of life aboard the SeaRay. Suddenly, the marina manager is banging on their boat telling them it’s time to leave. Apparently they were up late playing loud music and had not made a good impression on their neighbors. Several hungover heads pop up in the cockpit and soon their engines rumble to life. I bet that was one interesting 4 hour boat ride back to Miami. No sooner had their boat cleared the dock, than both of our boats gently eased out into the fairway and out the channel. We have enjoyed our Marathon stay but it is now time to move north.

The best part about our stay in Marathon was spending some quality time with Marty and Suzanne. Each evening found us sharing meals aboard either Idyll Time or Alizann. We will miss their companionship when we part ways in a few days.