We are up this morning before sunrise in preparation of our long 100 mile day to the Abacos. The Marina has installed a chain gate across the channel at night to keep out intruders. We pre- arranged for the security guard to lower it for us at 6:45 AM. A last check of the weather and our plans change. The forecast now calls for seas building to five foot later today. With a northeast wind we would be bucking the seas the whole way. So, we alter course and will head over to Spanish Wells for a few days and let the seas calm down some.

On our way out of Nassau, we decide to take a trip through the harbor for old times sake. This is familiar territory to us as we used to keep a 25 ft. fishing and diving boat in Nassau. Things have changed some since we were here last. You now have to call Harbor Control on vhf16 and request permission to enter. I haven’t heard them deny any request for entry but a formality you must do. Our request to enter the east entrance and travel through the four mile harbor exiting the west entrance is granted and we are on our way. 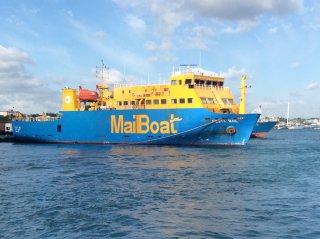 The harbor is busy with the mail boat and two cruise ships at dock. 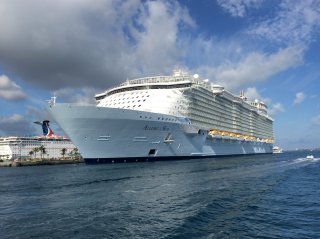 There are two new marinas in town but everything else is pretty much the same as 10 years ago.

Once out in the Northeast Providence Channel, our fishing gear is out and two lines are soon in the water. We fish the deep waters for the next few hours without even a bite. Once near Spanish Wells and in some shallower water, we soon hear the rod singing on the back deck. It turns out to be a barracuda. We don’t want him and he is soon released. A few minutes later the line is paying out again. Somehow this one took the whole ballyhoo without touching the hook. Time to head in to the dock. Oh well, not a good day for fishing.

Spanish Wells Yacht Haven is our home for the next three nights. Our first task is a much needed bath for the girl. Afterwards the bikes are down for more exploring. We have been to Spanish Wells several times on the fast ferry from Nassau but this is our first trip by boat. The Marina is brand new. In fact they are still putting the final touches on finishing up some of the docks and landscaping. Someone has big plans for this place and have done a beautiful job with the construction. In addition to the docks and restaurant there are also a few small cottages for rent. I suspect that once the word gets out to boaters, this marina will become a destination and slips will become difficult to obtain.

Spanish Wells is one of our favorite islands. 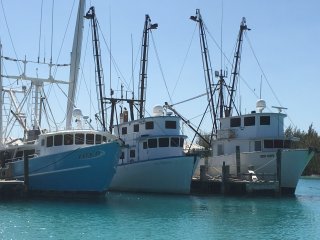 Th name is said to originate from the Spanish Explorers discovery of sweet well water on the island. Most of the white Bahamian residents are descents of Loyalists who settled here after the U. S. War of Independence. Unlike other Bahamian Islands , these folks are self sufficient and do not rely on the Government for help. The island is run as a co-op and they even have their own power system on the island. It is a wealthy island of hard working fishermen. These fishermen are responsible for 75% of the Nations supply of spiny lobster. The fishing fleet is at the docks getting repairs done as the lobster season is closed. Walking through the town reinforces our great memory of the island. The small concrete homes are all meticulously maintained. There is absolutely no display of wealth as everyone here keeps a low profile. Unlike other islands, everything is clean and orderly. There is no crime on the island.

There are two grocery stores and several well stocked marine supply companies. Most of the other stores are based out of people’s homes. We helped support the bakery and also a fishing tackle shop in someones garage. Papa Scoops is the happening place on the island at night. The two flavors of homemade soft serve ice cream changes daily and is posted on a telephone pole on the street corner. Banana and chocolate are the choices when we visit. What a great way to end the day. 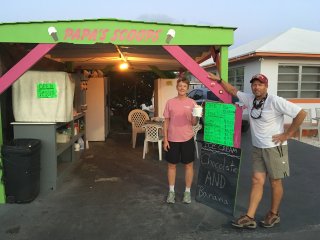 Talking with the locals, we learned that the primo fishing spot was a reef about 10 miles out. With a good weather forecast we decide to head that way. This spot goes from 6000 ft to 60 feet in just ¼ mile and is only two miles off shore. Sure enough, we were not disappointed. As we neared the shallow rise, our reel began to sing. A large Mahi breaks the surface and tries to shake free. After a 30 minute fight, he is in the cooler. We would like to stay out here longer but It is time to start heading back to Spanish Wells. We had several other strikes on our way back but nothing was landed. We anchor for the night just inside Russell Island. Tomorrow we will make the 50 mile Atlantic Crossing to the Abacos. Thanks for following along with us. 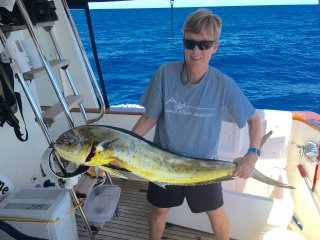