It is hard to believe that our month’s stay at Bald Head Island has come to an end. 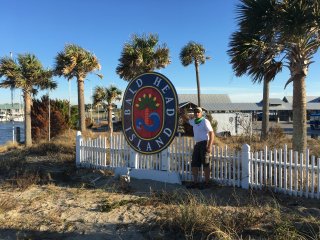 The time went quickly. Staying in the harbor afforded us a front row seat to the beehive of activity around the Marina as everyone who visits the island must come by private boat or ferry. 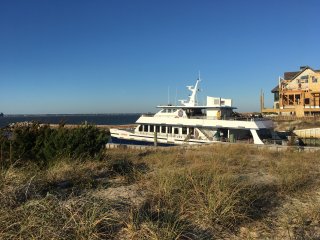 The ferry runs like clockwork each hour with a multitude of vacationers, locals, and workers coming over for the day from Southport. Several private boats ferry construction workers back and forth each day sometimes carrying building supplies. Thanksgiving weekend found the ferries running extra trips with all the boats jam packed with holiday travelers. Adding to the traffic is the tug and barge Capt. Alex ferrying commercial trucks bringing supplies to the island and removing debris and garbage. 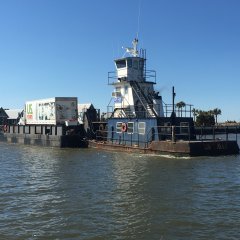 Occasionally a big freighter would come into view as it passed by the harbor entrance while in the ship channel headed towards Wilmington. 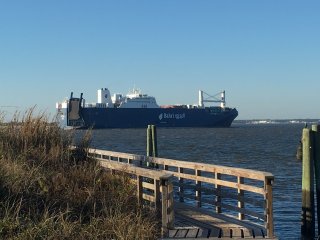 An added bonus to the harbor activity was the arrival of several fellow Krogens, SueSea, Forever Exploring, and Bulldog Sally. 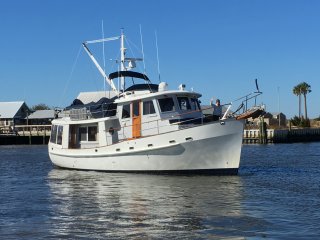 Mike and Patti aboard Salt n’Light have just purchased a home here and they brought their Krogen down for the Thanksgiving holidays. We enjoyed getting to know them better over several dinners.
Most of our mornings began with a three mile walk on the beach. 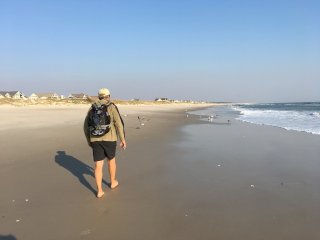 Other than the many terns and seagulls, we had the 16 miles of public access beach all to ourselves. 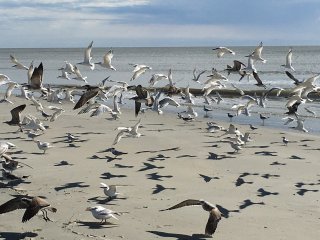 One morning we spotted a dead Pellican with a band on its leg. 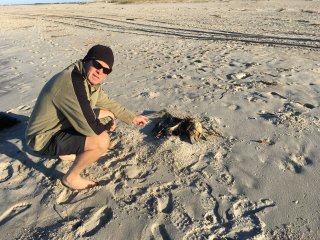 Once back at the boat we called the phone number on the band and learned that the banding was part of the North America Bird Banding Program. 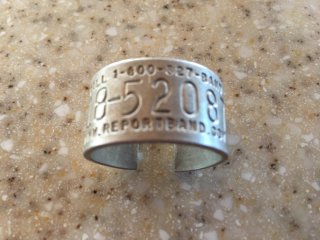 This bird was banded near Ocracoke Island in June of this year while still a juvenile and unable to fly. 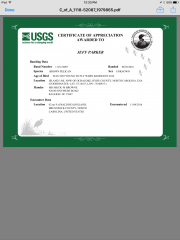 A follow up email from the banding program stated:

“Bird banding is important for studying the movement, survival and behavior of birds. About 60 million birds representing hundreds of species have been banded in North America since 1904. About 4 million bands have been recovered and reported.

Several days later we found a second banded bird decomposing in the sand. This little fellow was an arctic tern . For some reason the banding program did not have this bird in their data base but promised to send the information to us later. 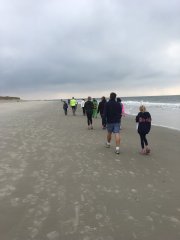 Some of the participants took this literally. 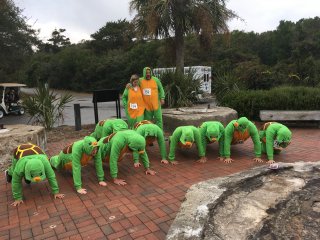 The pet parade was well attended and made us really miss our two dogs, Daisy and Sebastian. The evening was topped off with an oyster bake hosted by the local market. 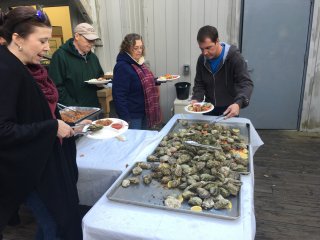 The temptation of all you can eat oysters, shrimp, and pulled pork BBQ ending with with banana pudding was too much for Jeff to resist. Along with 200 other hungry guest, we enjoyed this annual island feast. Many hours were spent biking the live oak canopied roads as well as strolling the lightly used golf course cart path to burn off excess calories.

The forecast showed a two day weather window approaching towards the end of the week for our 48 hour run to St. Augustine. As the weekend approached, we continually checked the forecast every few hours as we watched this window slowly shrink from optimal to tolerable. Pre morning departure, the winds whipped through the marina with vengeance as a cold front passed through. As our weather window continued to deteriorate, we charted and recharted bail out plans if needed.

With the winds still gusting on Friday, our departure day, we again recheck all the forecast. Things still look doable for at least 24 hours. A decision is made to stick our nose out at noon and evaluate the seas as we work our way south. There are several inlets that we can run into and continue south on the ICW if conditions become too rough.

Once clear of Cape Fear Shoals and out into the Atlantic, we are pleasantly surprised to find only 2-3 ft. seas. The day slowly dwindles into evening with conditions holding. 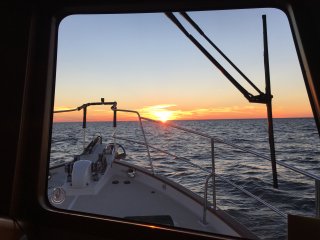 We stay between 3 and 10 miles offshore hoping for some protection from the land if the winds do pick up overnight. Tension always seems to builds with the darkness as everything seems magnified at night. The FLIR, our night vision camera, helps ease our anxiety. Being able to see even birds flying in the dark of night is very reassuring. 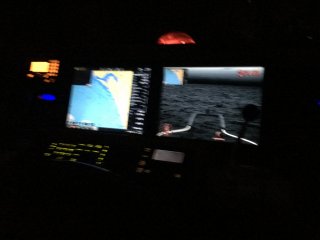 Nate and Primo are not quite sure what to make of the strange movement and sounds each time a wave slaps against the hull.

Nearing Charleston, our AIS comes alive with targets. We carefully weave our way past four freighters as we cross the Charleston Inlet at 2 AM. Once through this busy area we have the ocean all to ourselves and see no other boats.

Pre dawn the seas seem to be building although the forecast still predicts only 2-4 ft. seas. By 10:00am we have 4-5 foot seas. With the winds being out of the northwest, conditions are tolerable. We are concerned with these building winds and seas as the winds are forecast to switch to the east this afternoon and evening which would be directly on our beam. Conditions could get much worse when these winds shift if the seas continue to build. We should be to the Tybee Roads Inlet and the Savanah River by noon. We will make our bailout decision once reaching this mark.