From Kwatsi Bay we continued our exploration of the Broughton Islands spending two nights in Cullen Harbor. We are the only boat in this beautiful anchorage. At the east end of Cullen Bay is a narrow passage leading to Booker Lagoon. A dinghy ride through the rapids to the inner lagoon provided plenty of excitement as we shot past overfalls and whirlpools bigger than our boat. Inside the lagoon we deployed the prawn trap and pulled in another 22 prawns, enough for one meal. 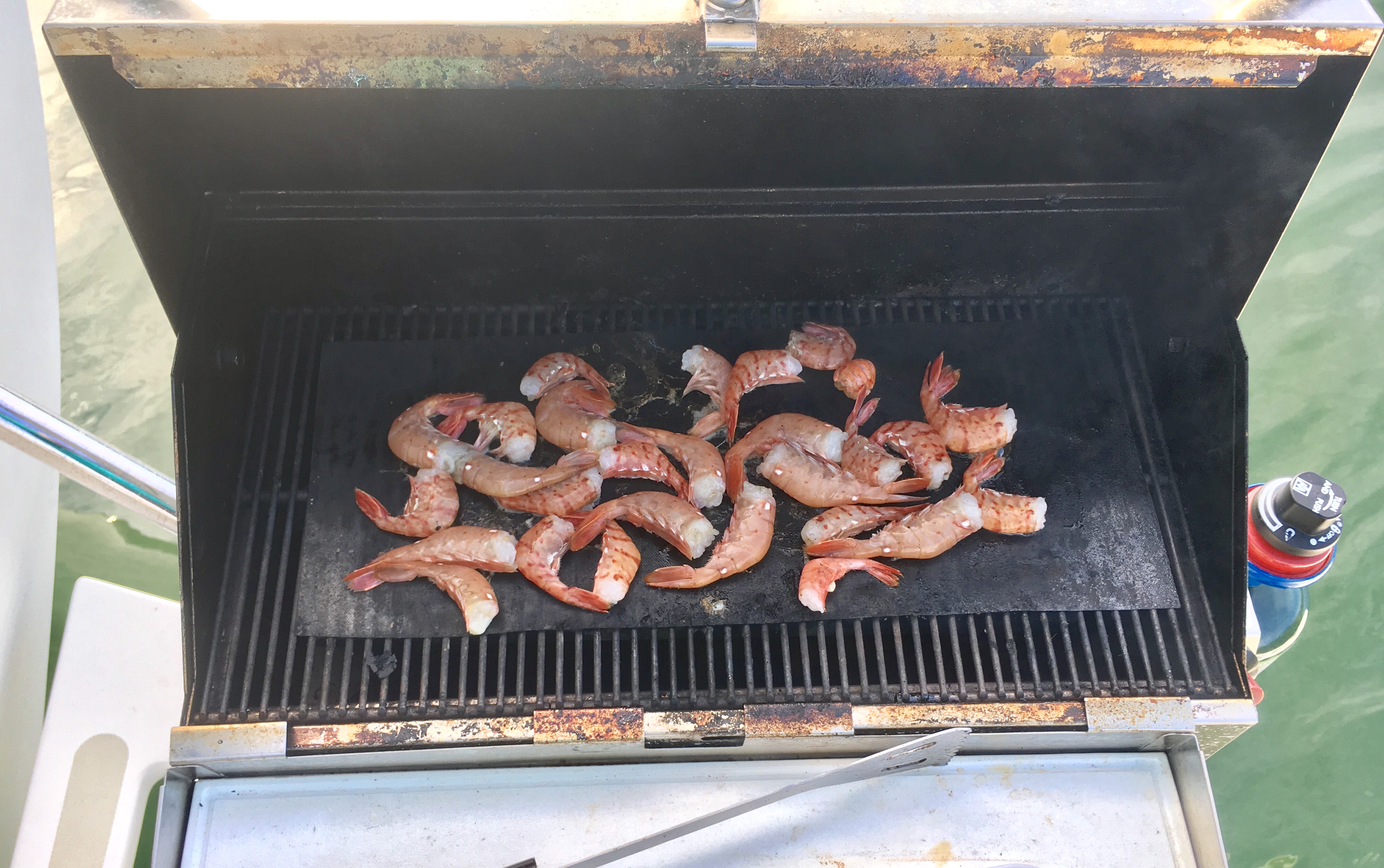 We also saw a black bear and cub one morning on the small beach. Judging from the excitement of the sea gulls and other boats trolling along the steep drop just outside the harbor, salmon fishing must be good here. We took the dinghy out and trolled for several hours. Due to line tanglement issues, we came back to the boat empty handed. We are still on a steep learning curve for this deep water fishing.

Heading north to Simon Sound, we spotted the spouts of an Orca pod in the distance. We motored closer and managed to get a glimpse of them diving for food before they moved off. 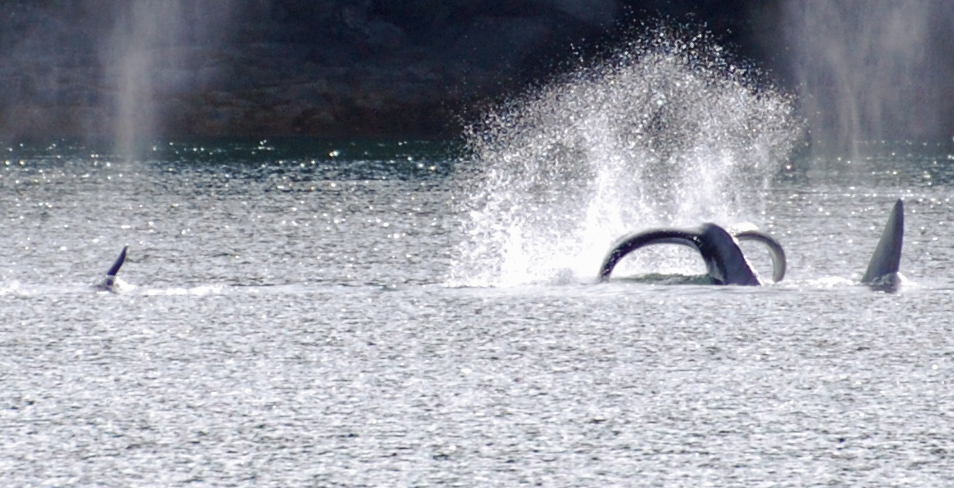 It was a beautiful cruise up Simoom Sound . We anchored for the night at the head of the sound in O’Brien Bay. We were again the only boat there and enjoyed the solitude of this remote area.

While exploring in the dinghy, we spotted a sign posted up on one of the rocky ledges. 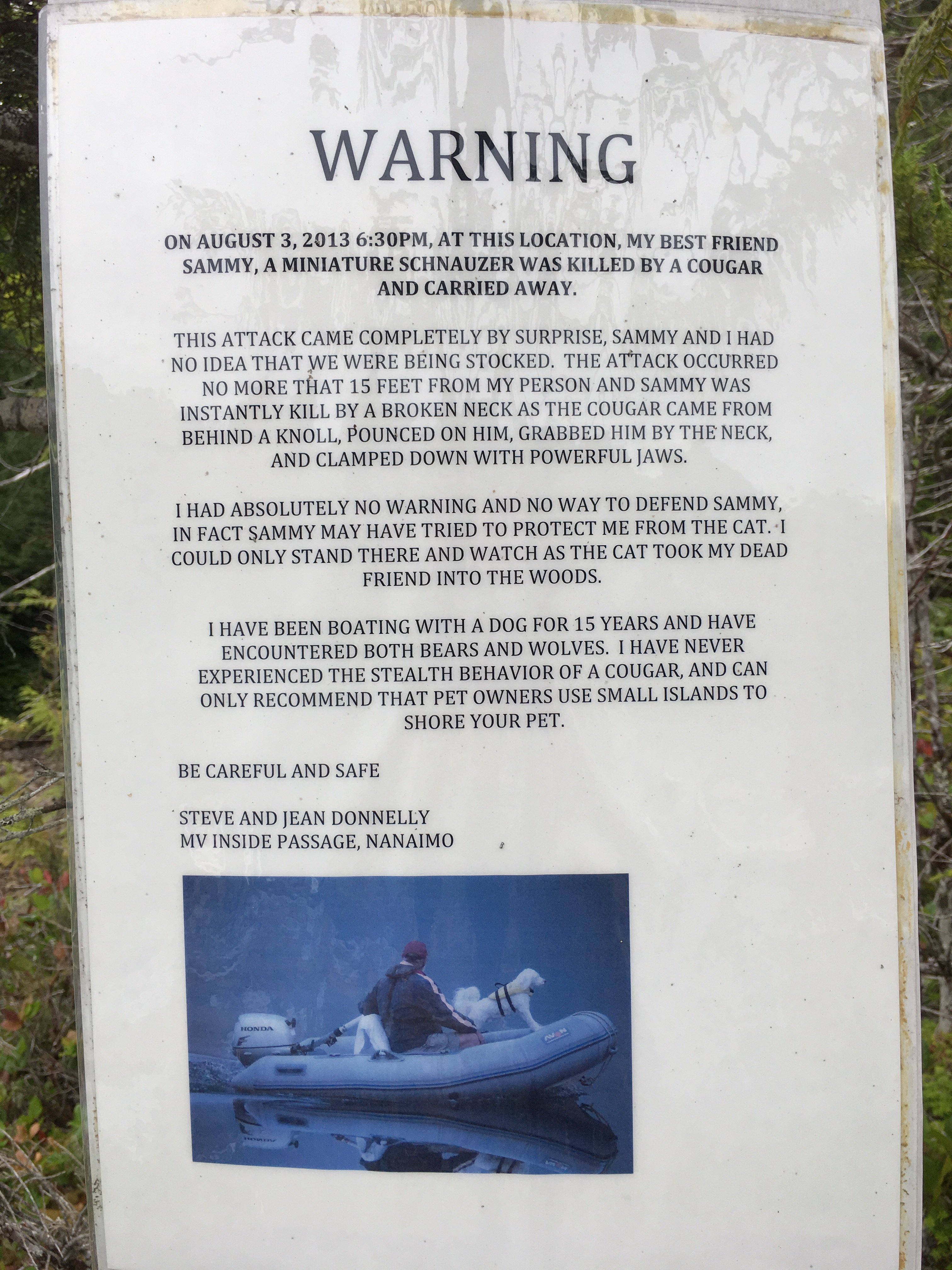 In 2013, a boater lost his dog to an ambush cougar attack at this spot. Apparently he was within 15 feet of his pet and had no warning that he and the dog were being stalked. So sad! This is the second incident of cougars attacking small dogs that we have heard about in this area.

Ever since beginning our research on the PNW, Pierre’s Echo Bay Marina has been a designated stop for us. His Saturday pig roasts are legendary. Pulling into the docks, Pierre is there to catch our lines. It is such a welcoming sight to see cleats on the docks. These are the first cleats we have seen since leaving the east coast. For some reason, almost every marina in the PNW has bull rails instead of cleats. In may not seem like a big deal to most but trying to get our heavy lines around these bull rails quickly while docking is no easy feat. Life would be so much easier if all marinas would use cleats. Thank you Pierre!

Once again we rendezvous with Wendy and Leigh on Forever Exploring for some more fishing adventures. Just outside the marina are prime fishing grounds. You know things are good when you see the Guide boats all fishing in the same place. With our new improved down rigger technique, we too join the parade of boats trolling along a 200 ft deep wall. One of our challenges is getting our lines to the right depth. Some people tell us they fish at about 30 ft. deep while others are about 90 feet down. Most boats have downriggers which allow them to get the lures down deep. This piece of fishing equipment also tells them exactly how deep they are fishing. We have rigged up improvised downriggers but we have no idea how deep down our lure actually is. 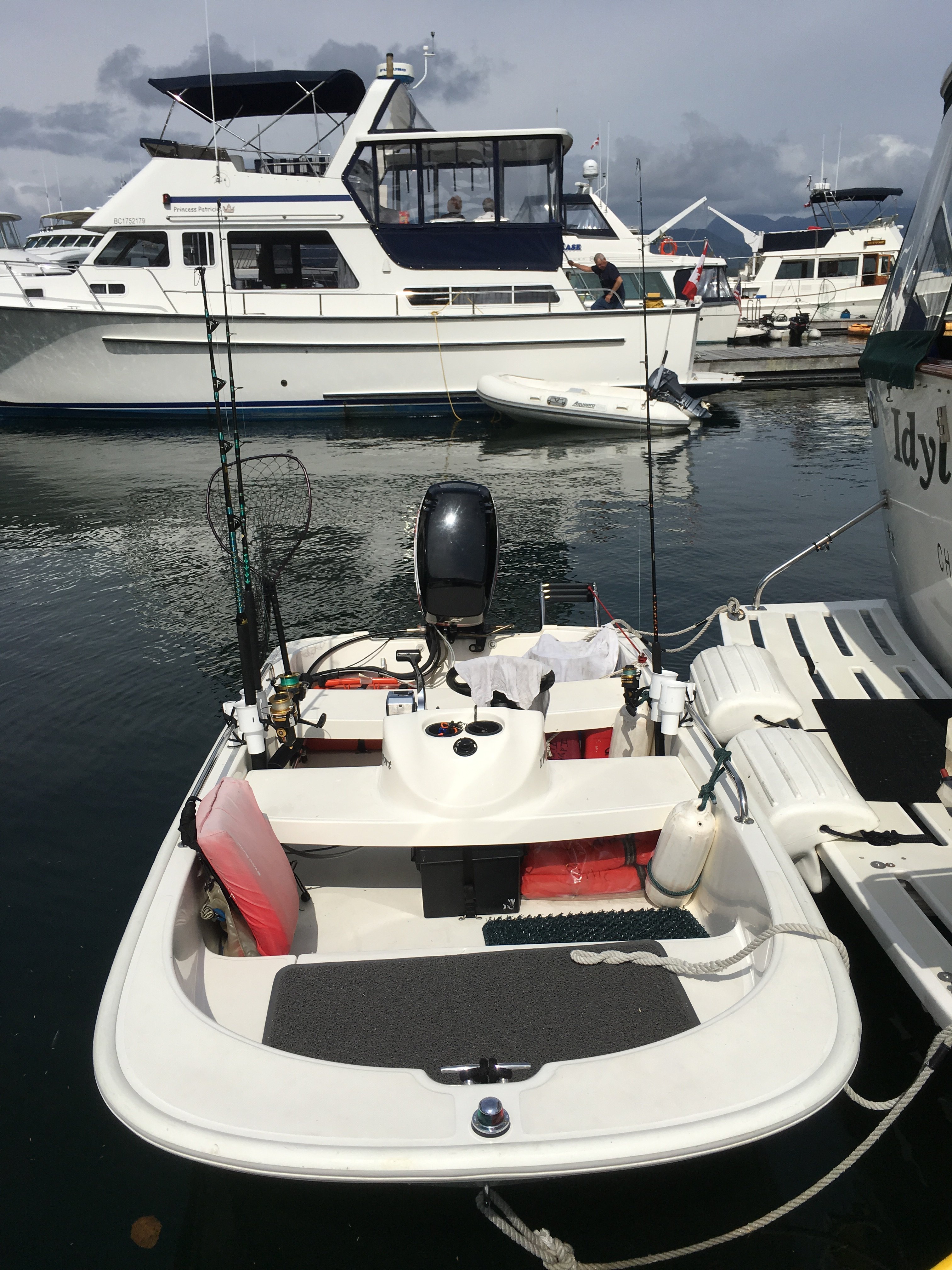 A Scotty downrigger is now in our shopping cart on Amazon waiting for us to get back in the U.S. for shipment. 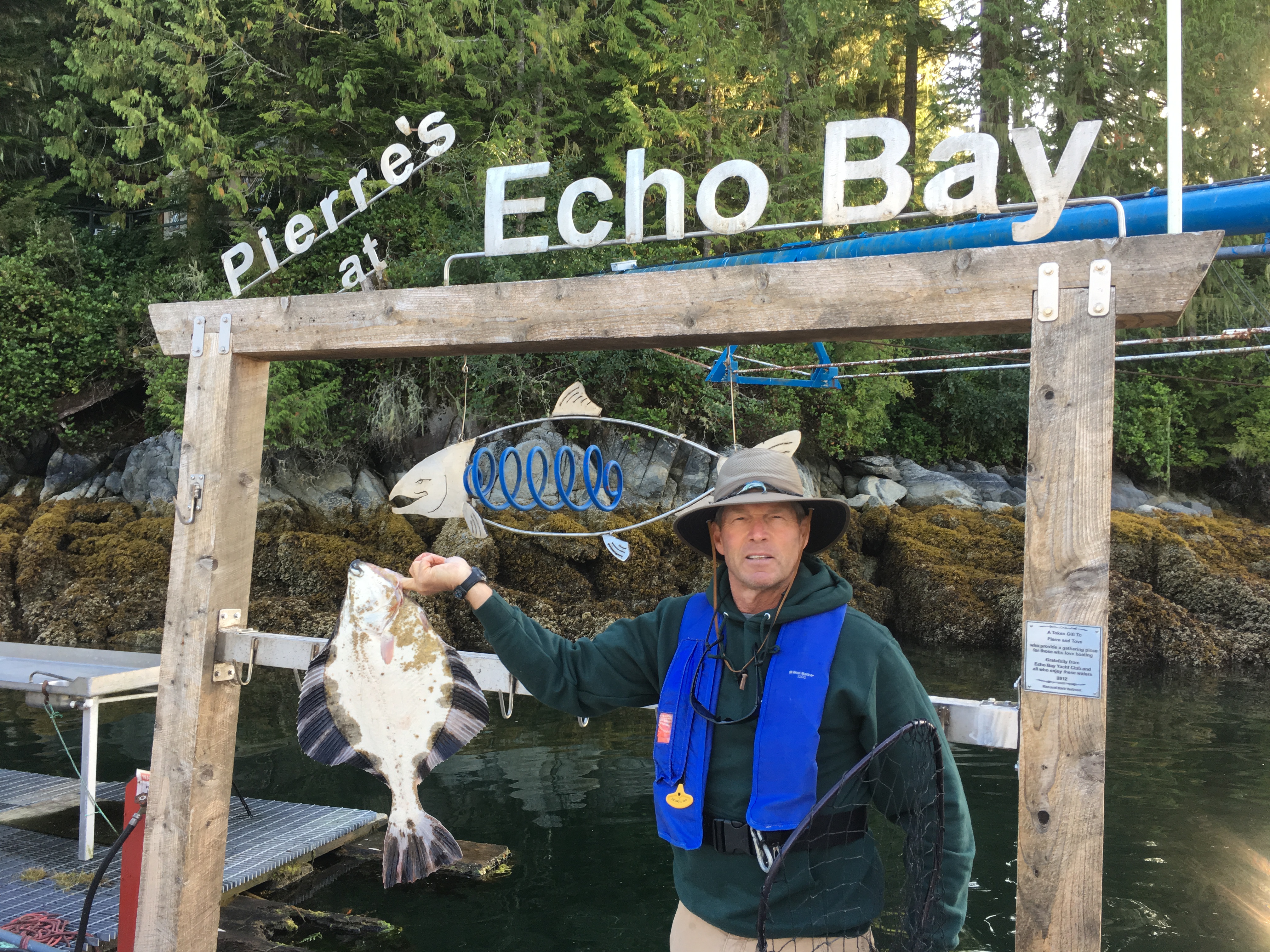 We do surprisingly well with our “bubba downrigger ”. We manage to net two salmon and one small halibut for the freezer.

After a hard day of fishing, Pierre’s pig roast was a much anticipated event. Each week Pierre has a different dinner theme, tonight is Viking motif. At check in each boat was given an empty cardboard milk carton and a piece of cloth. Our task is to construct a Viking ship with these materials for the table center piece. 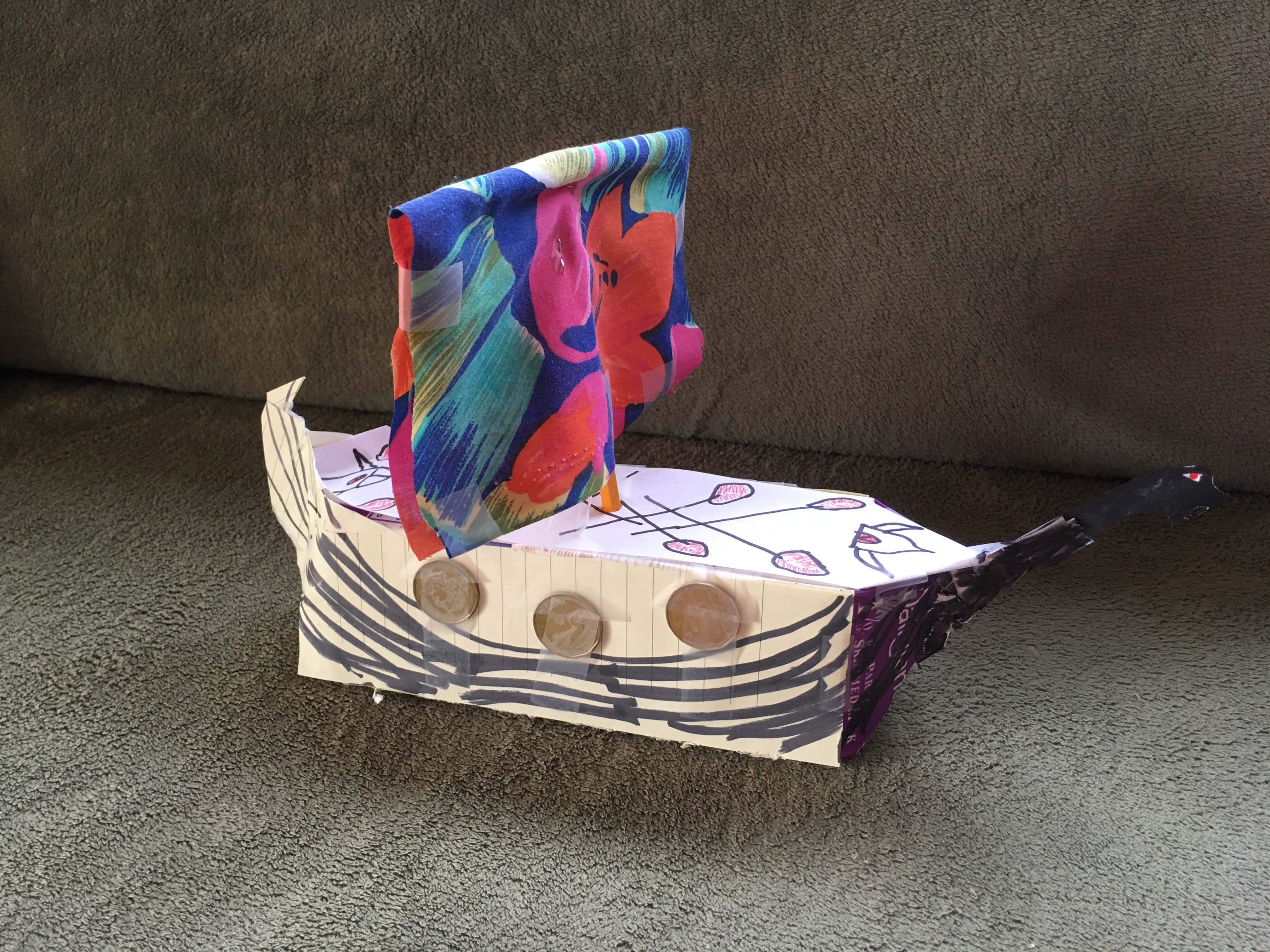 As you can see from the photo, our ship did not win first prize. Some were very creative. The pig roast was great fun and the meal delicious. Pierre is quite a character. 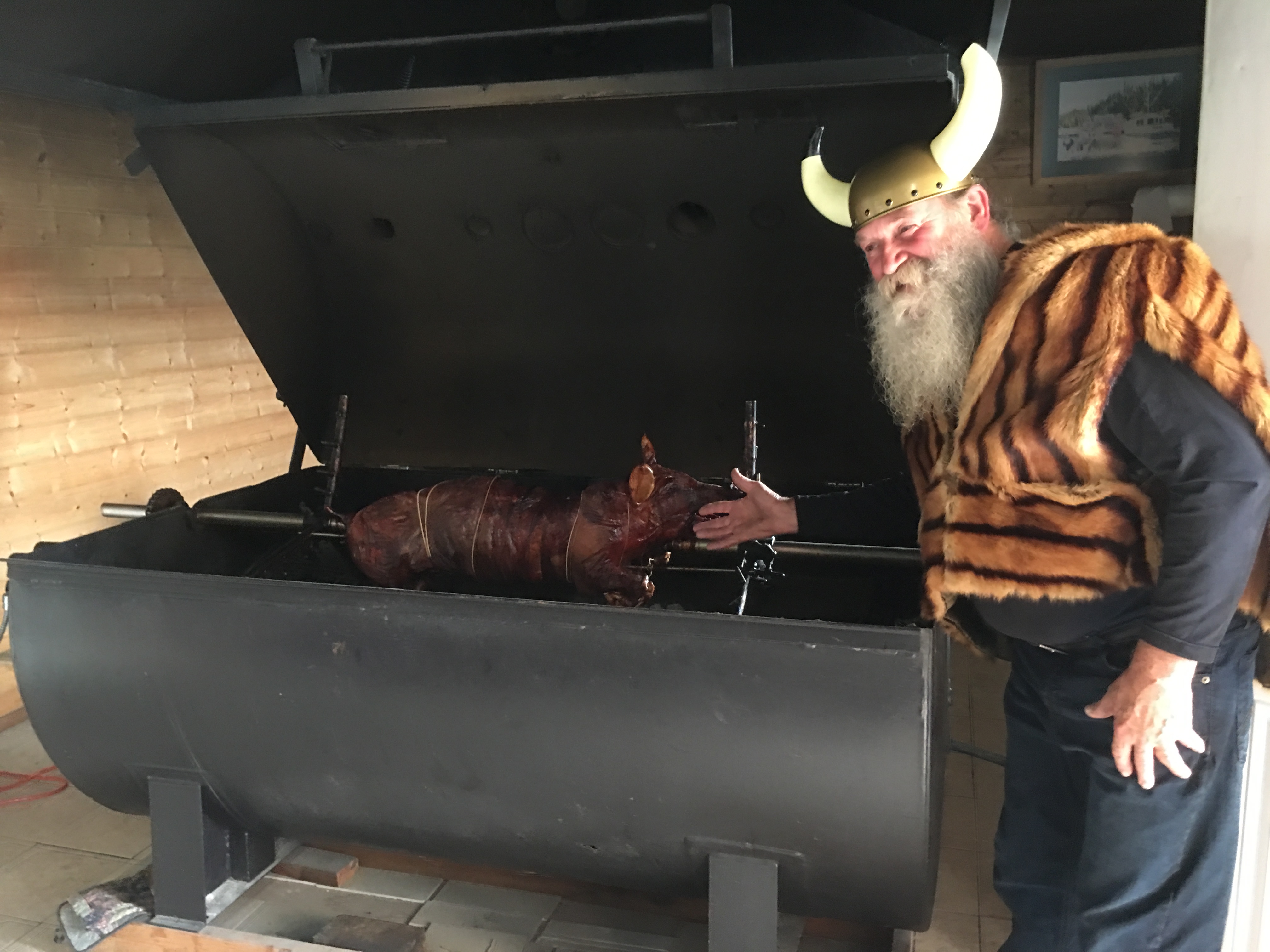 In the true Viking spirt, Jeff went back for 3rds. We look forward to many more Pierre pig roasts in the coming years.