Leaving Admiralty Island, our next destination is Red Bluff Bay on Baranof Island. Heading south on Fredrick Sound we again see a plethora of whale spouts. Approaching slowly so as not to get too close, we put the boat in neutral and enjoy the spectacle of a dozen or so humpback whales feeding on the surface. 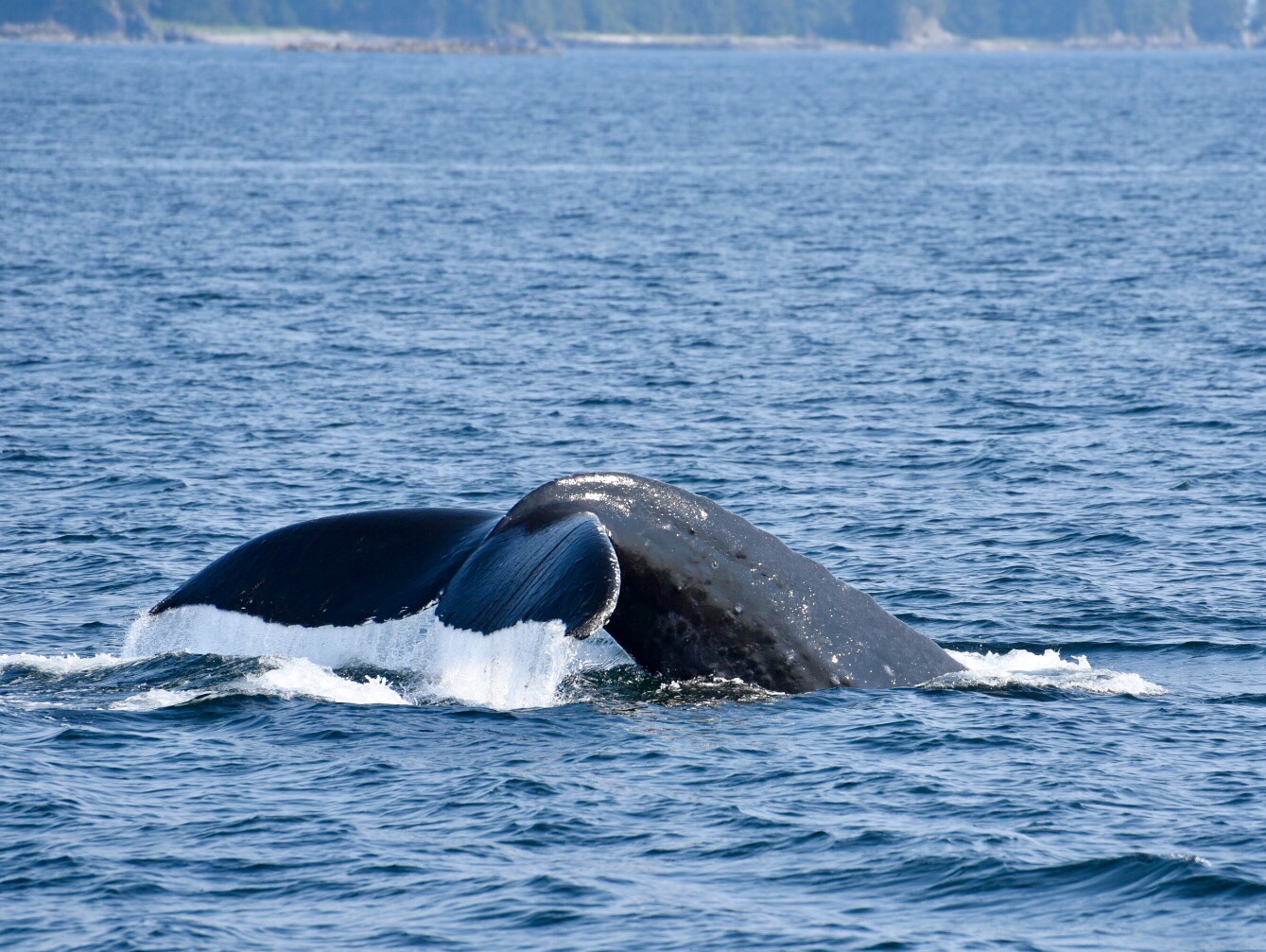 After an hour of entertainment, we decide to push on. 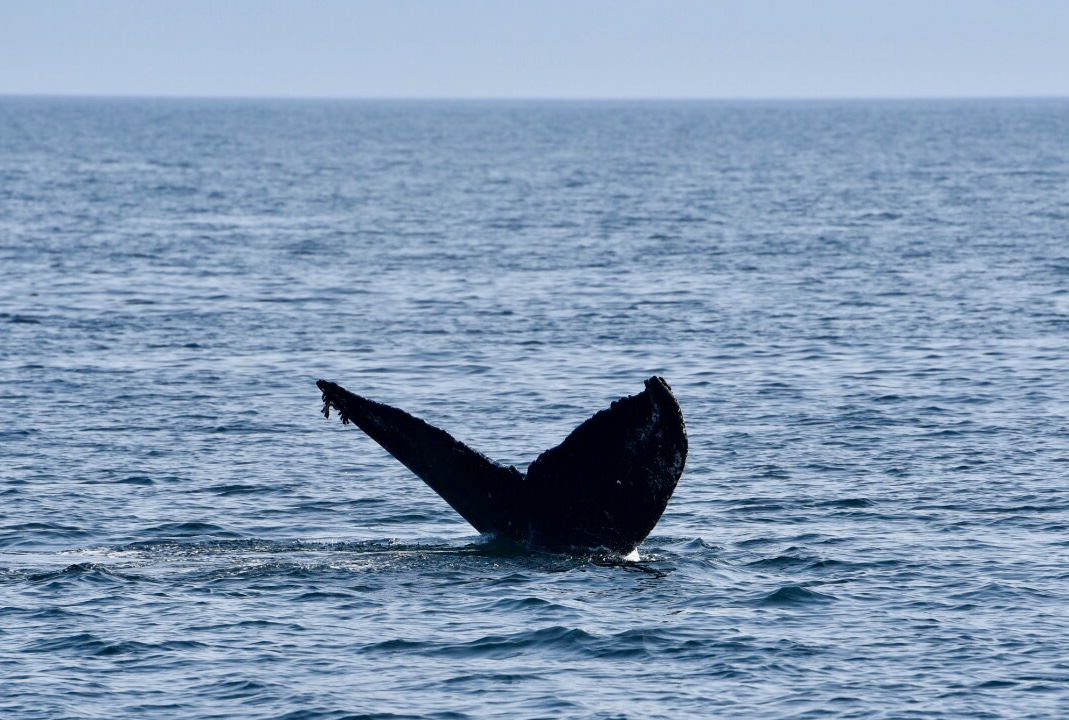 We stop at a group of Islands known as “Five Fingers” for another try at halibut fishing. A group of sea lions and several whales are also here searching for a meal. The curious herd of sea lions ease over to our boat for a closer look and appear to be quite unfazed by our presence. 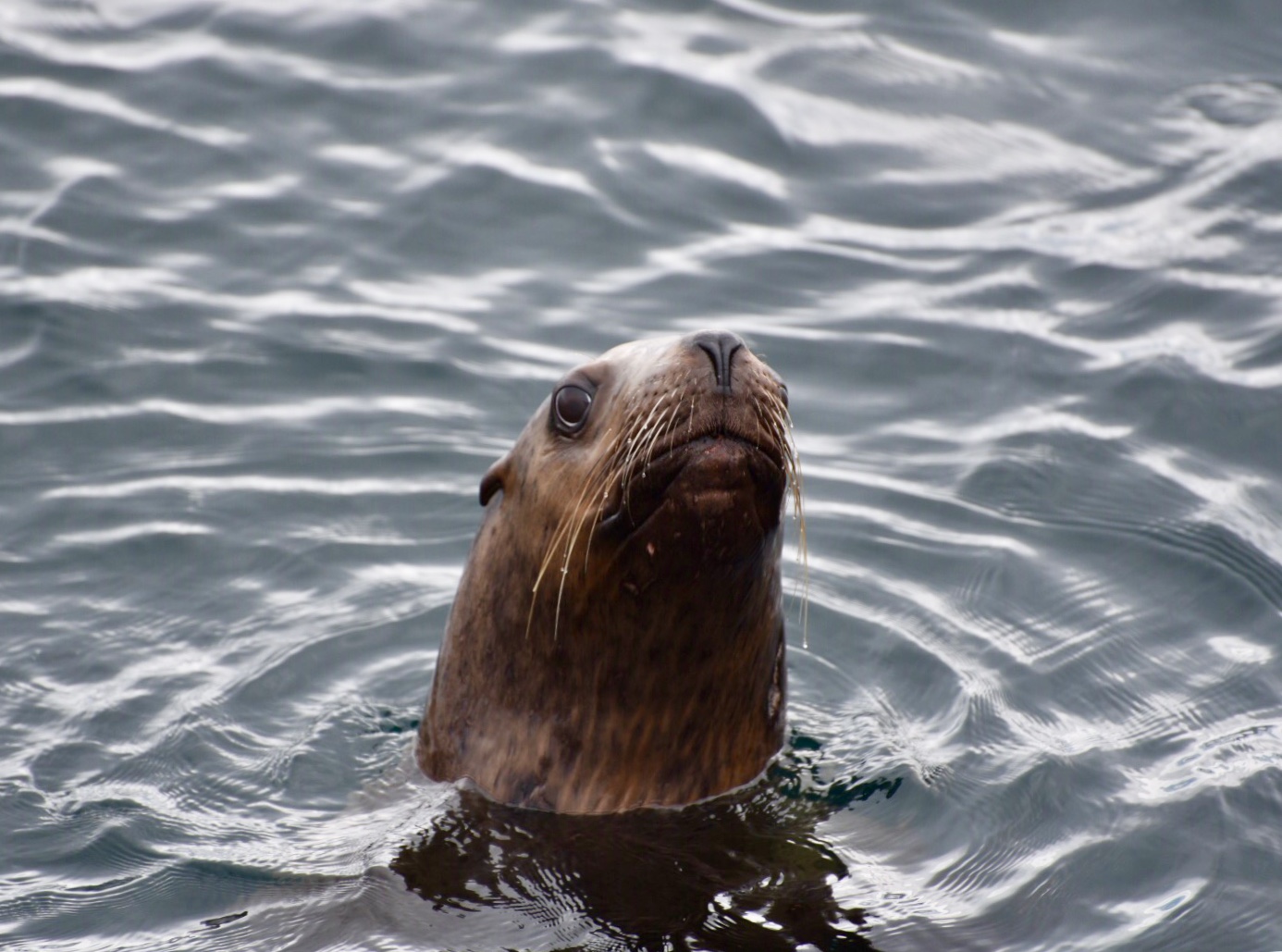 I wouldn’t want to be in the water with these guys as I believe they may try to take a bite out of us with their canine like teeth. 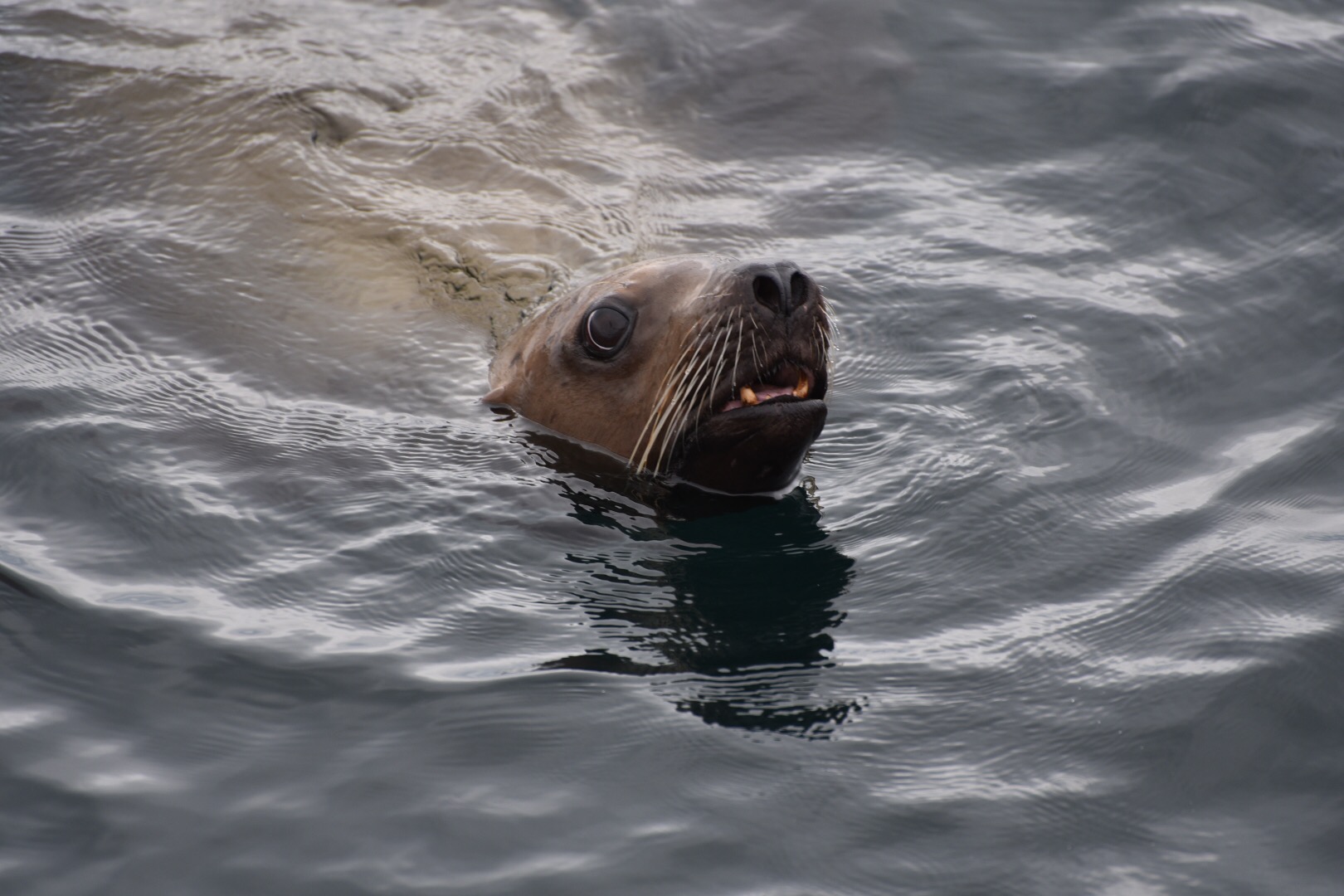 In spite of all the activity, we manage to jig up a nice size halibut. Just as Jeff is ready to harpoon him, he violently shakes his head and is free of the hook. Darn, he was the perfect size at about 30 pounds. This loss is soon lessened by the landing of a ten pound halibut, enough for three dinners. 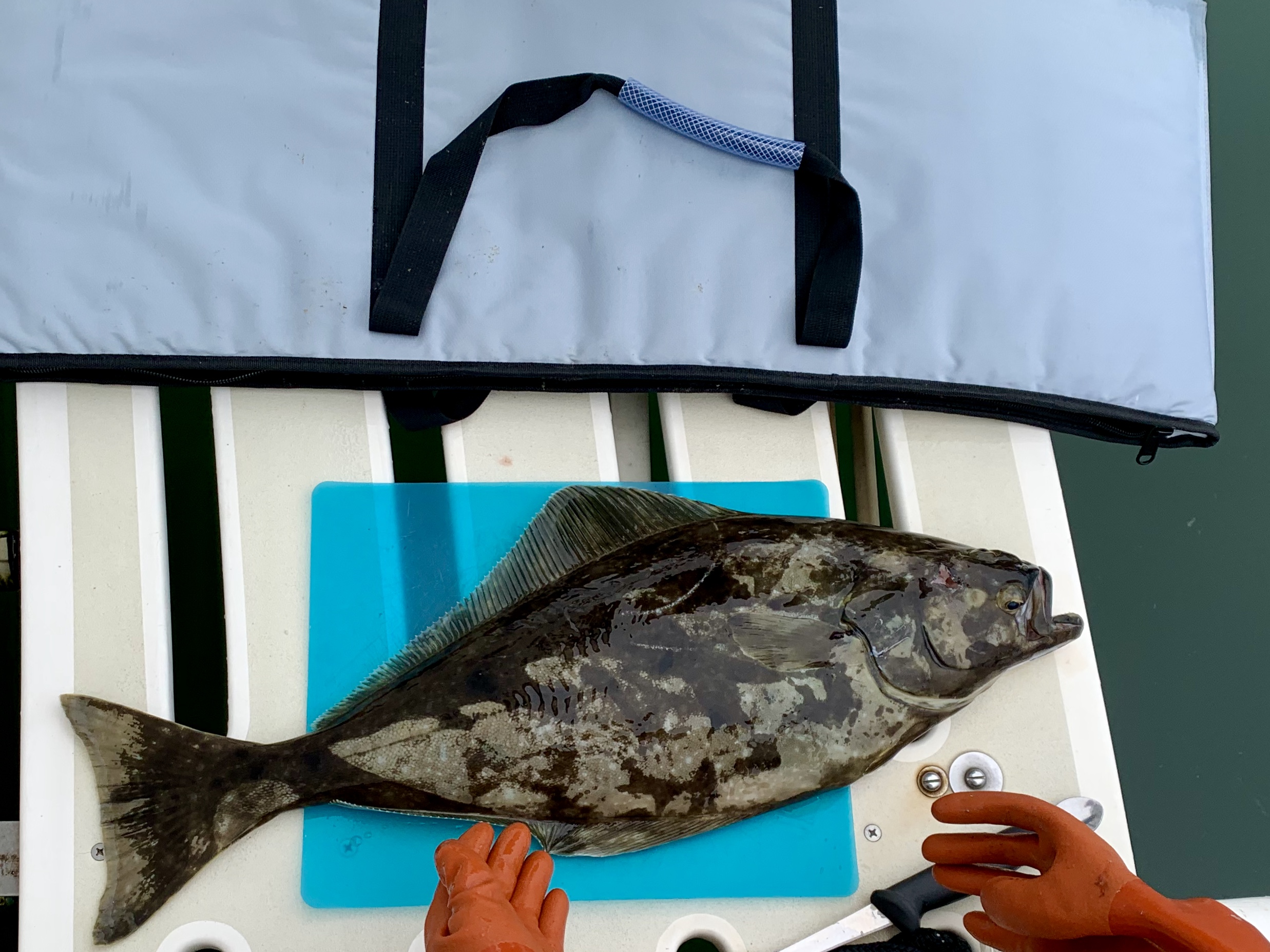 With our halibut aboard, we continue down Fredrick Sound passing Five Fingers Light House. 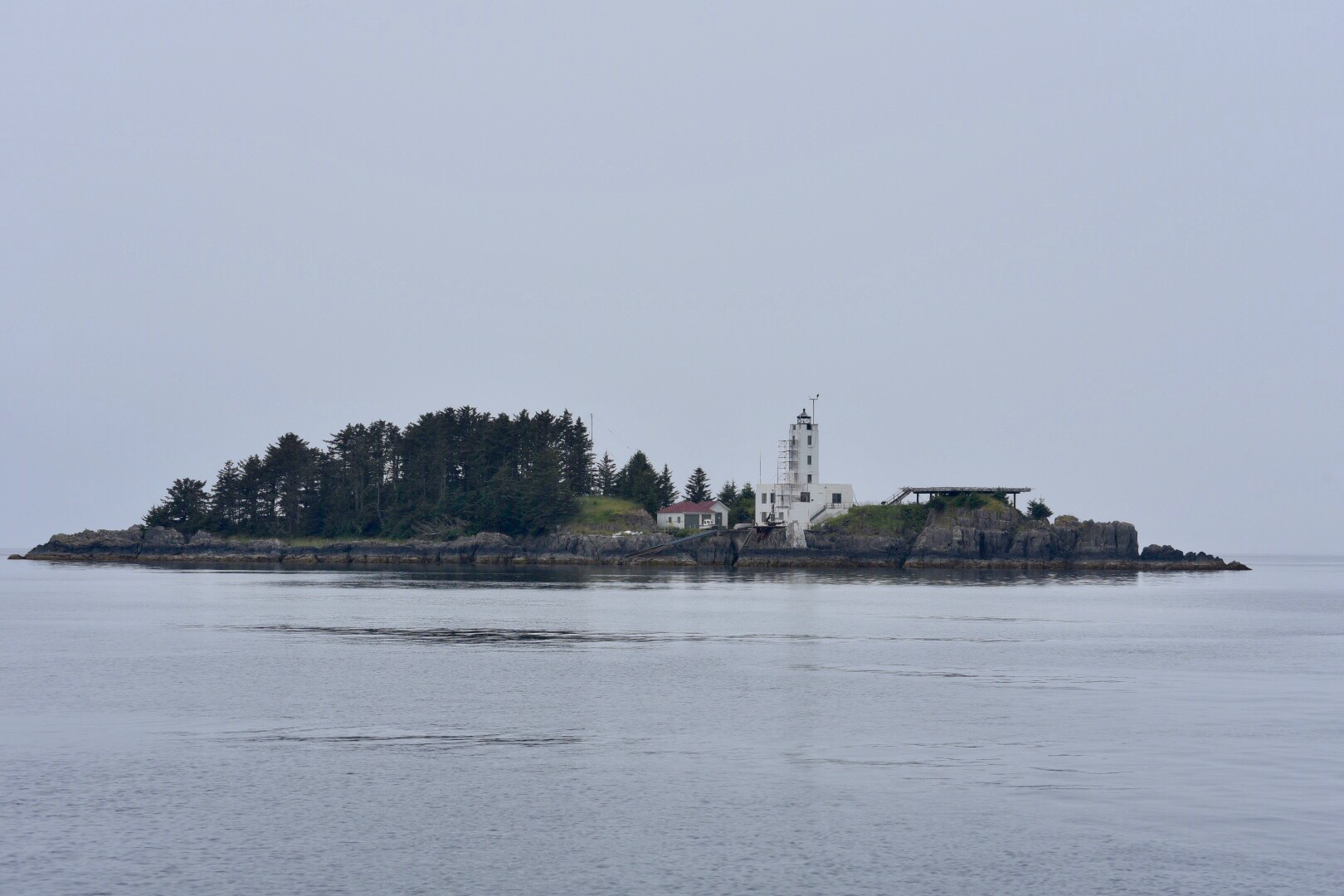 The tall mountain peaks on Baranof Island soon appear. The smoke from all the forrest fires on the Kenai Peninsula north of us reduces our visibility. 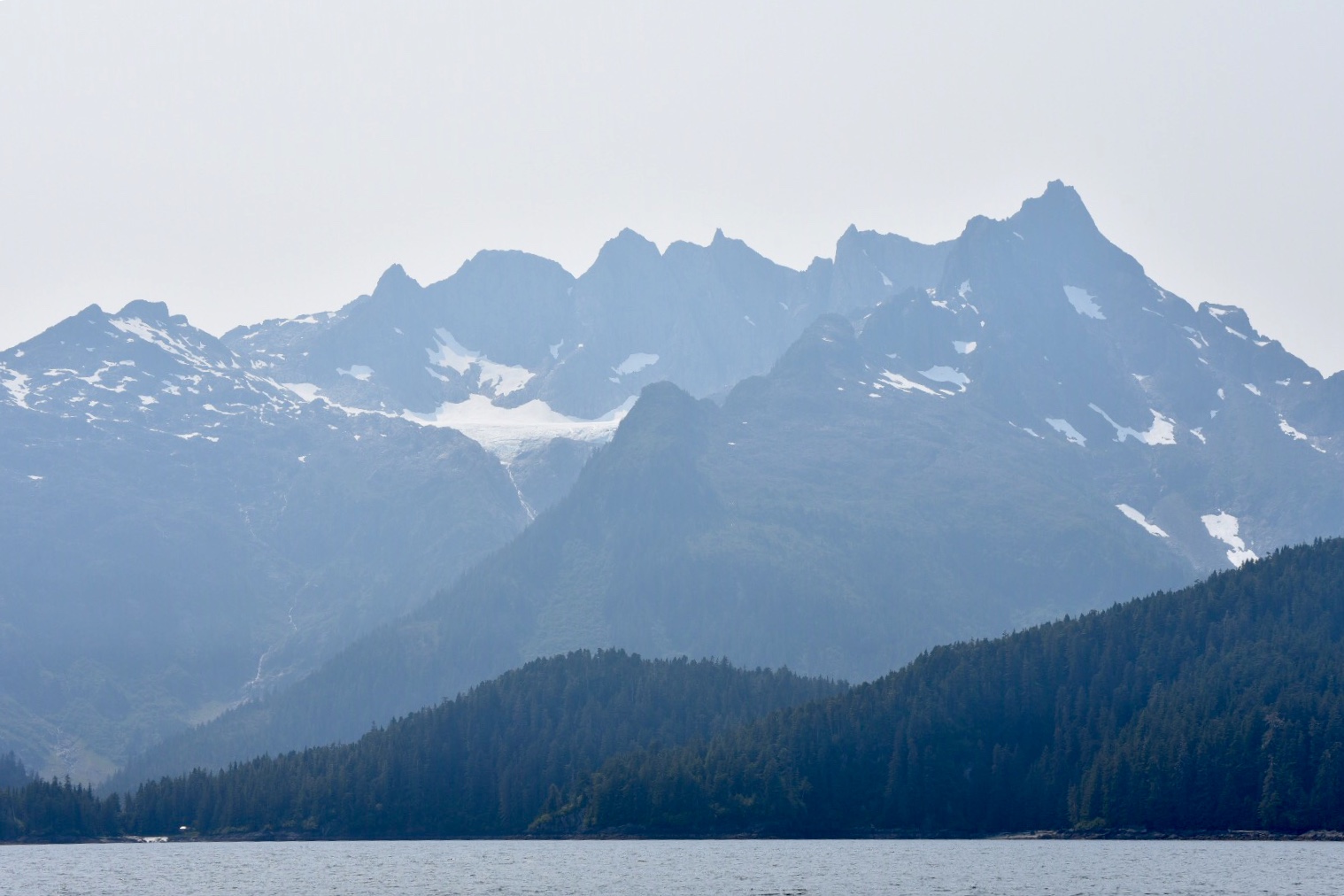 Reaching the entrance to Red Bluff, we must trust our charts as the sight of our channel remains hidden by several small islets. The guide books warn of magnetic disturbances in this area so we approach cautiously and visually confirm our position. Once through the narrow entrance, we have a beautiful three mile cruise between steep mountain walls on each side. The bay terminates on a wide river delta that looks to be perfect for salmon spawning. The broad shallow head of the bay is know as “ Bear Meadow” and terminates into an alpine valley with snow splotched Mt Radamaker at 4323 feet looming in the distance. 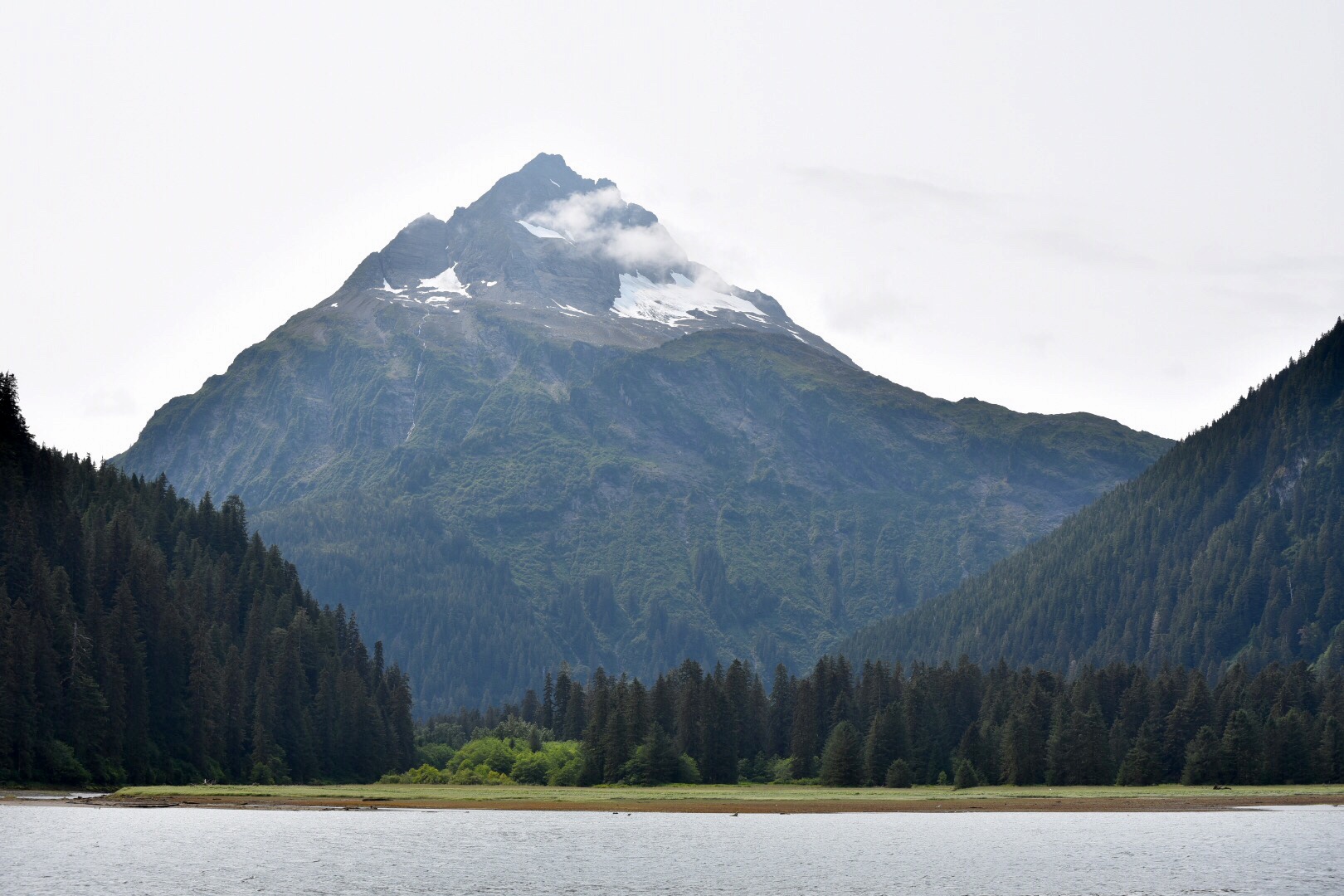 Bear Meadow lives up to its name. Just after low tide, a mother brown bear and twin cubs appear on the delta. The cubs are playful but you can tell the mom is very cautious. She hears some noise from the anchorage and soon hightails it back into the Forrest.
After setting our crab traps, we travel several miles back down the inlet to set some prawn traps. We place our traps near several other buoys hoping they have prior shrimping knowledge. Returning to the anchorage, we see the remains of an old cannery with many rusted parts scattered along the beach. 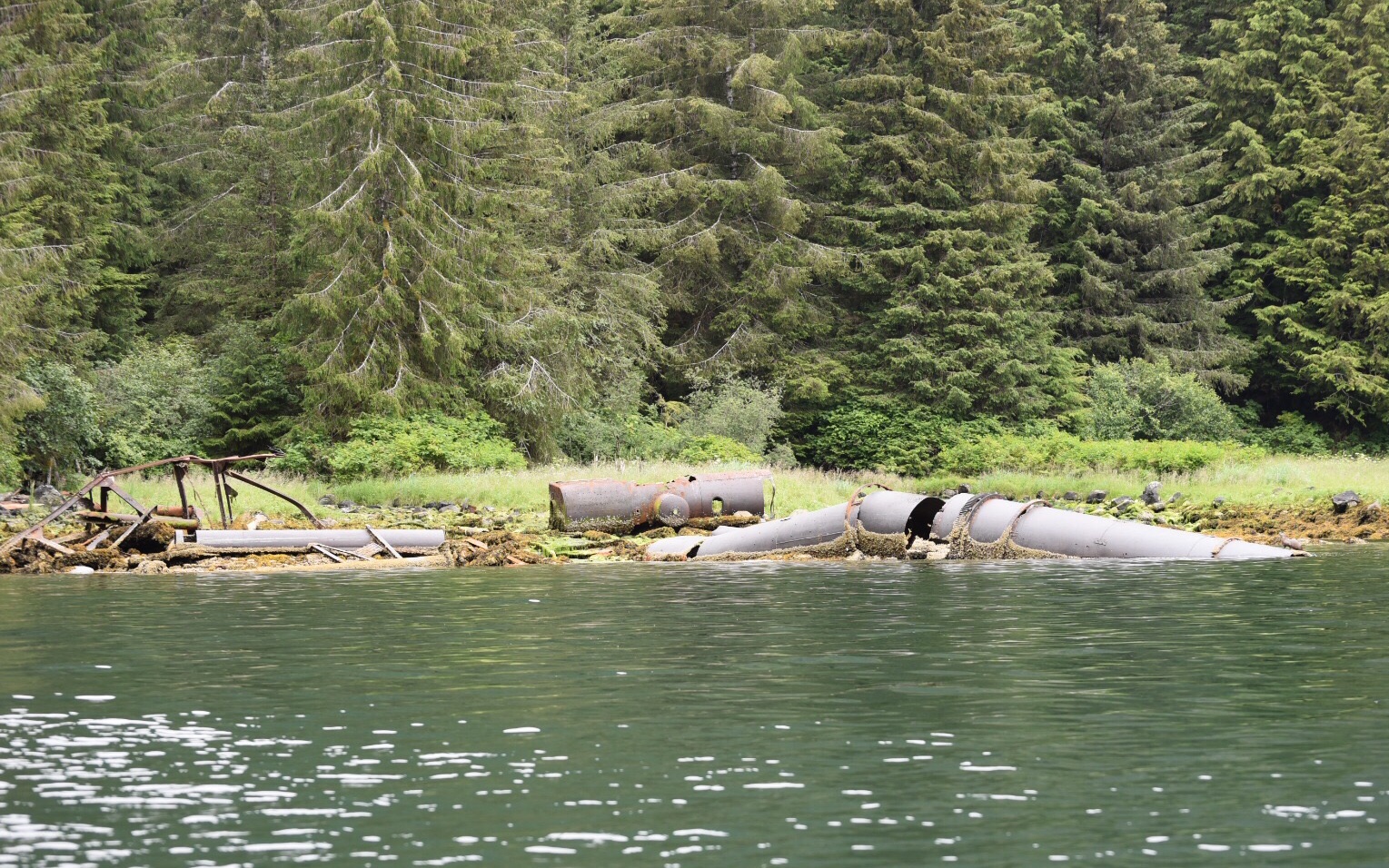 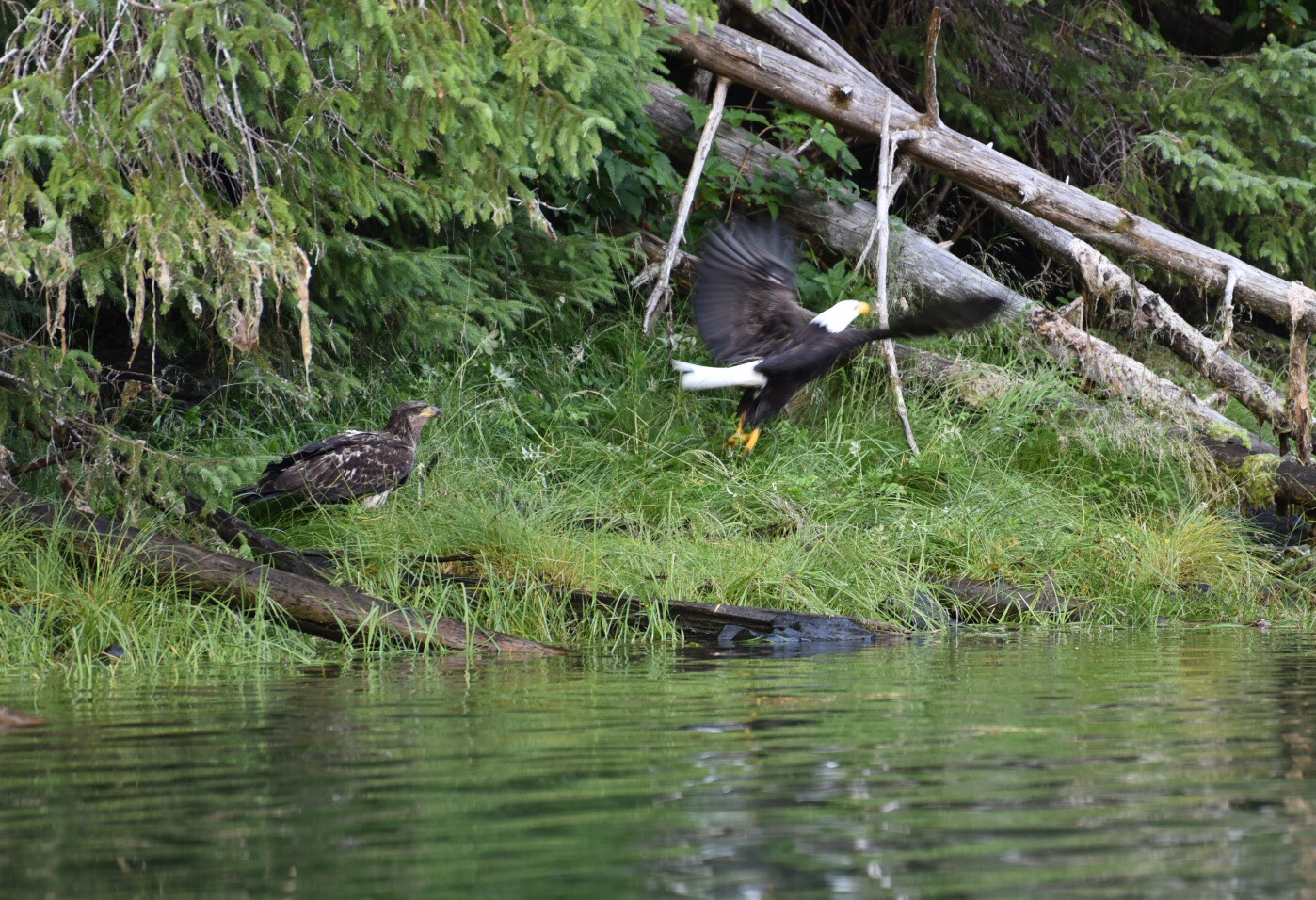 In addition to the bear sighting, we are entertained by the daily antics of several Bald Eagles as they chatter, dog fight one another, and forage along the shoreline. 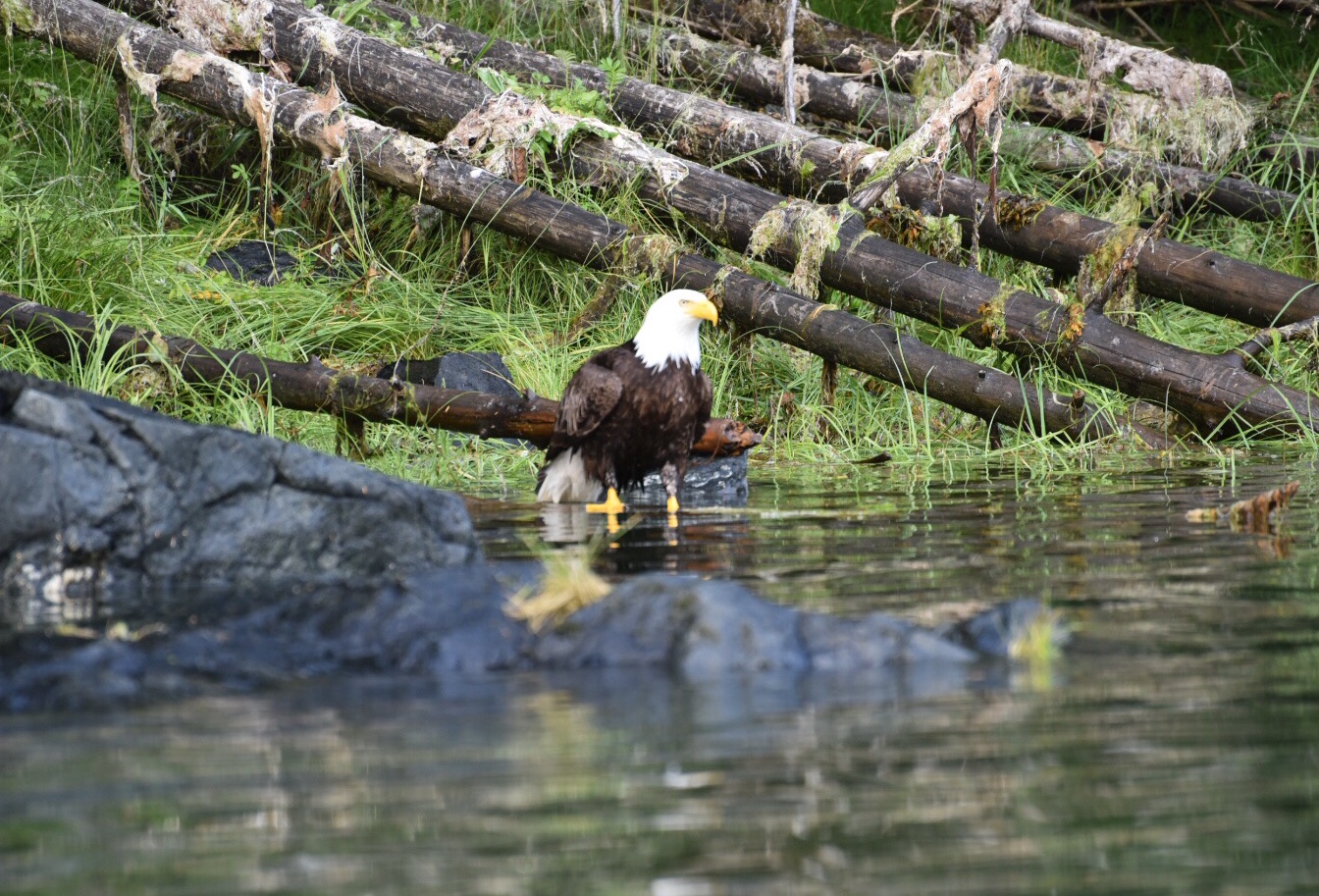 The crabbing and shrimping are productive and we dine on fresh crab, prawns, and rock fish. Each day several boats come and go as this is one of the most popular anchorages in SE Alaska. 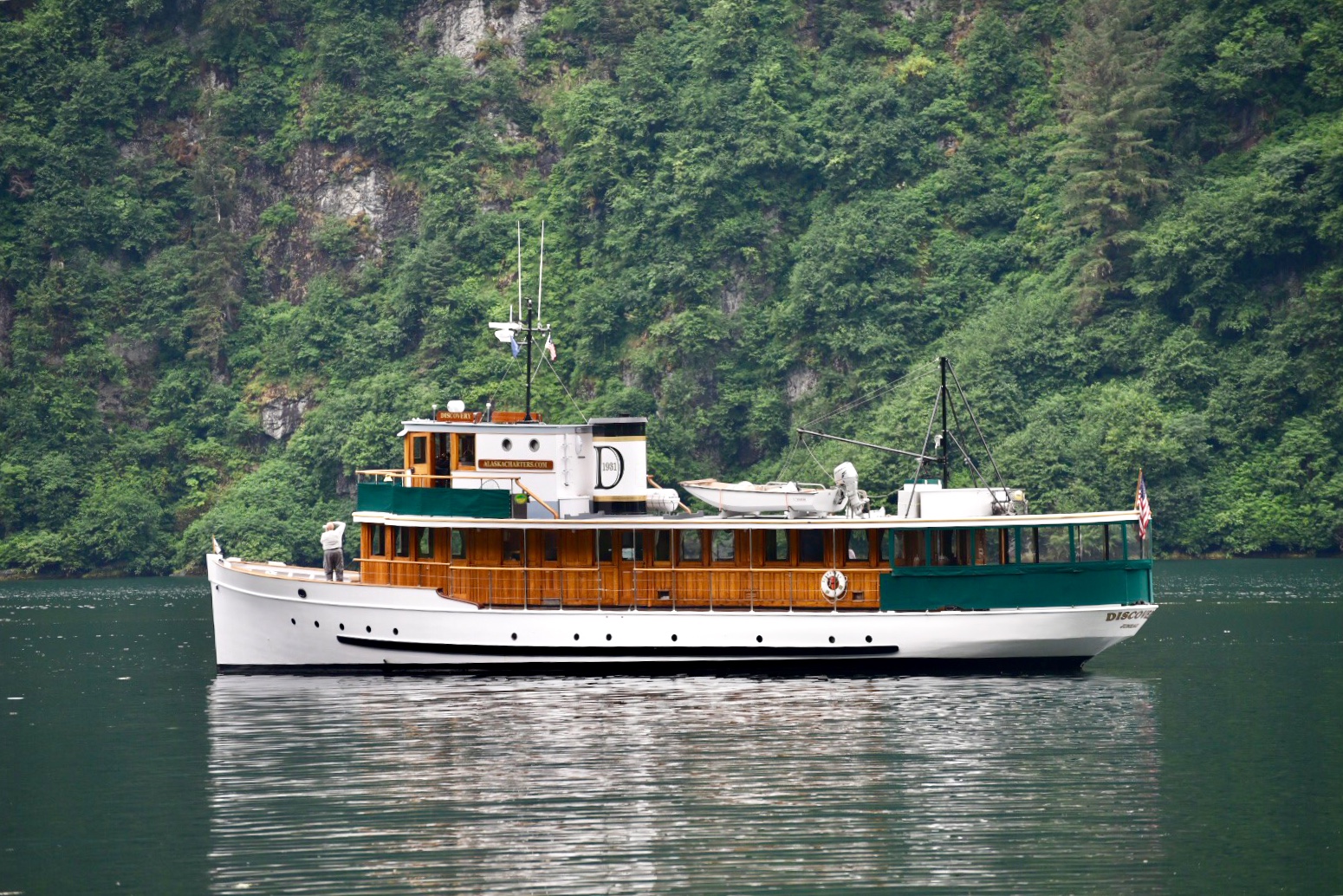 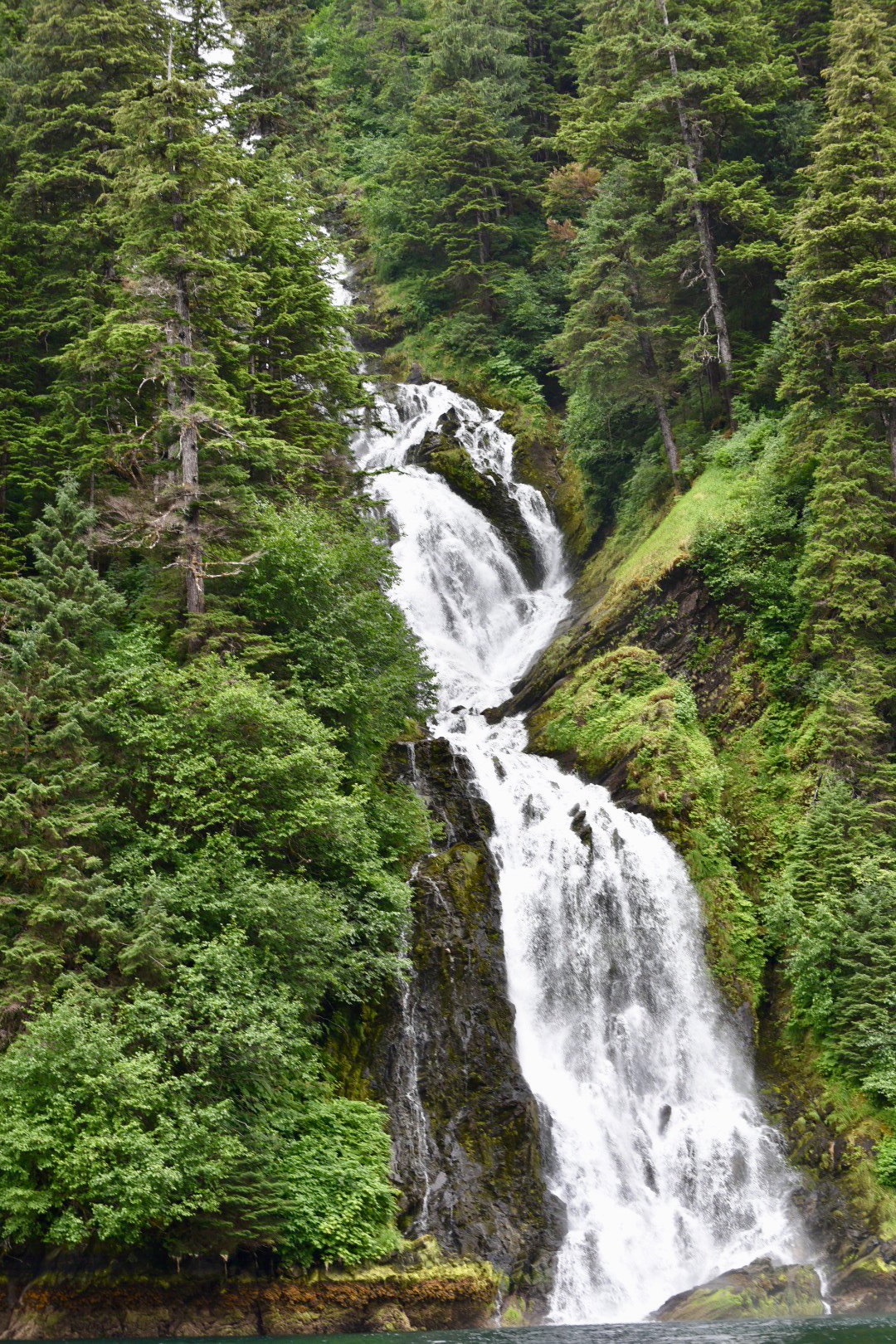 The anchorage becomes quite crowded after a few days with two mega yachts, six other private vessels, along with a float plane delivering guests to the mega ship. It is time for us to head back to Petersburg. 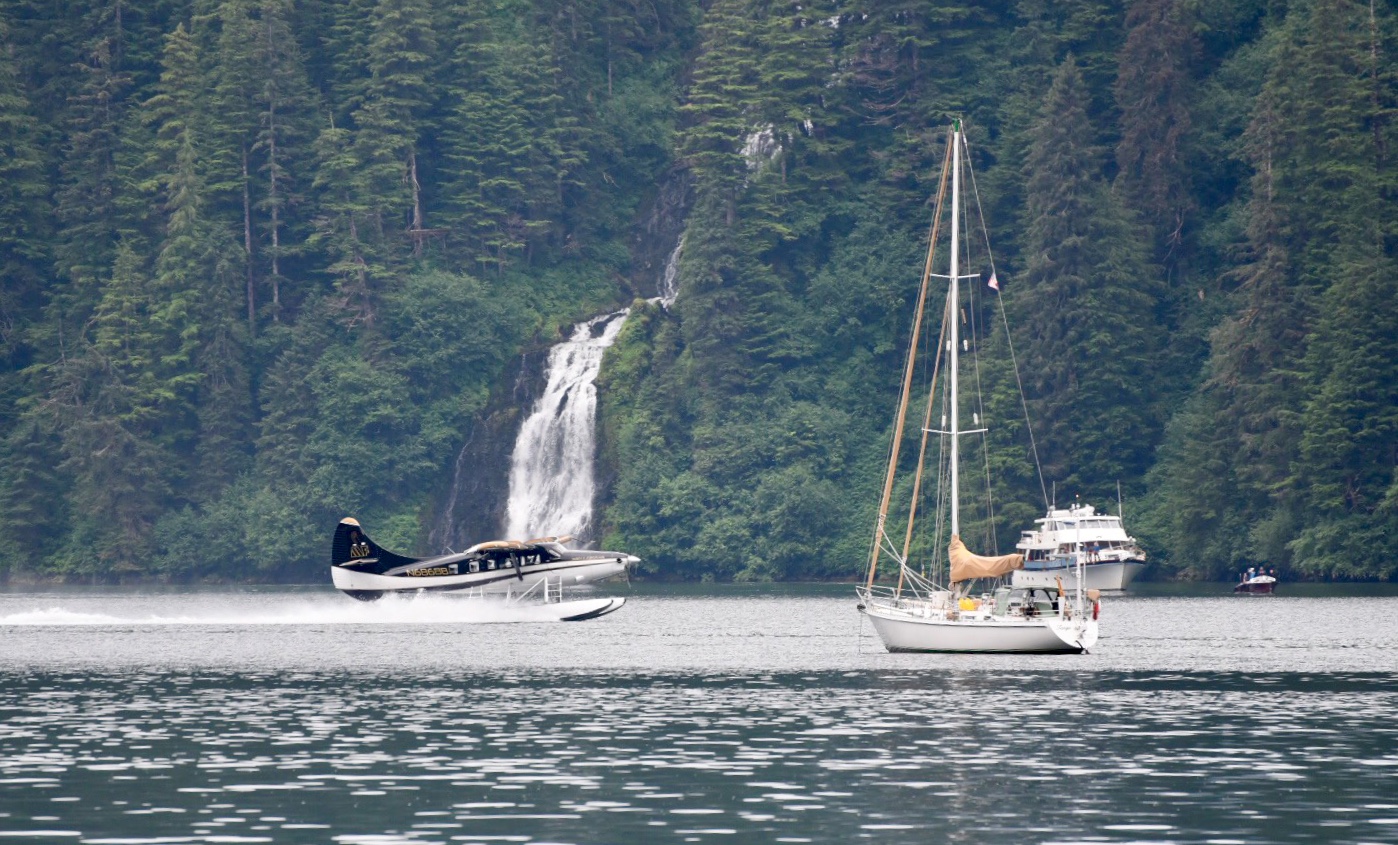 Fifteen miles from Petersburg while traveling up Fredrick Sound, we are pulled off course with a sighting of Orcas. We count eight adults and one baby. The baby stays close to mom and mimics her moves. We watch the Orcas feed and tail slap for thirty minutes before heading on to Petersburg. 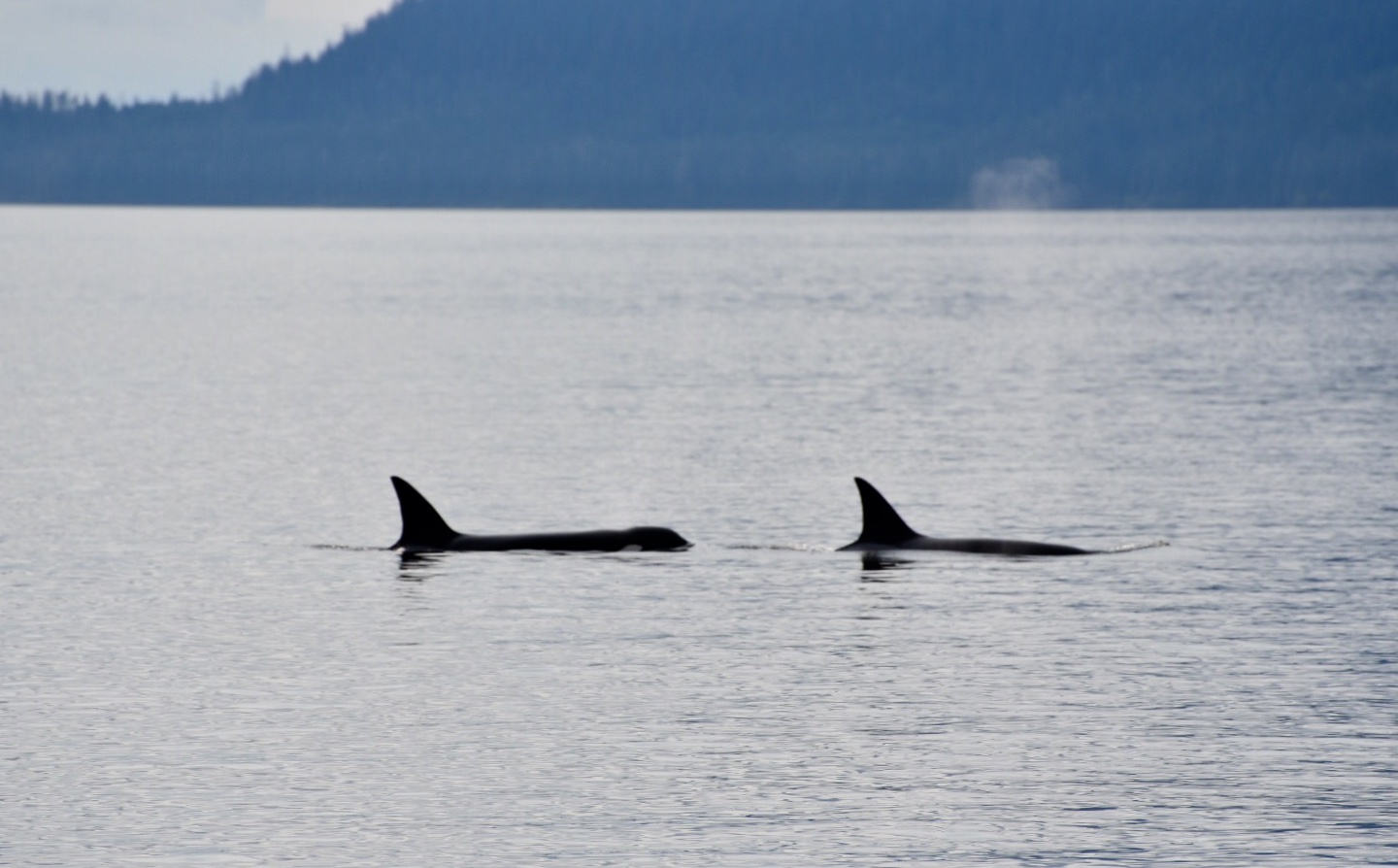 Our explorations of Baranof and Admiralty Islands were more than we had hoped for with great wildlife sightings and good fishing. We are looking forward to more cruises in this area once our niece and nephew arrive.

Thanks for following along. 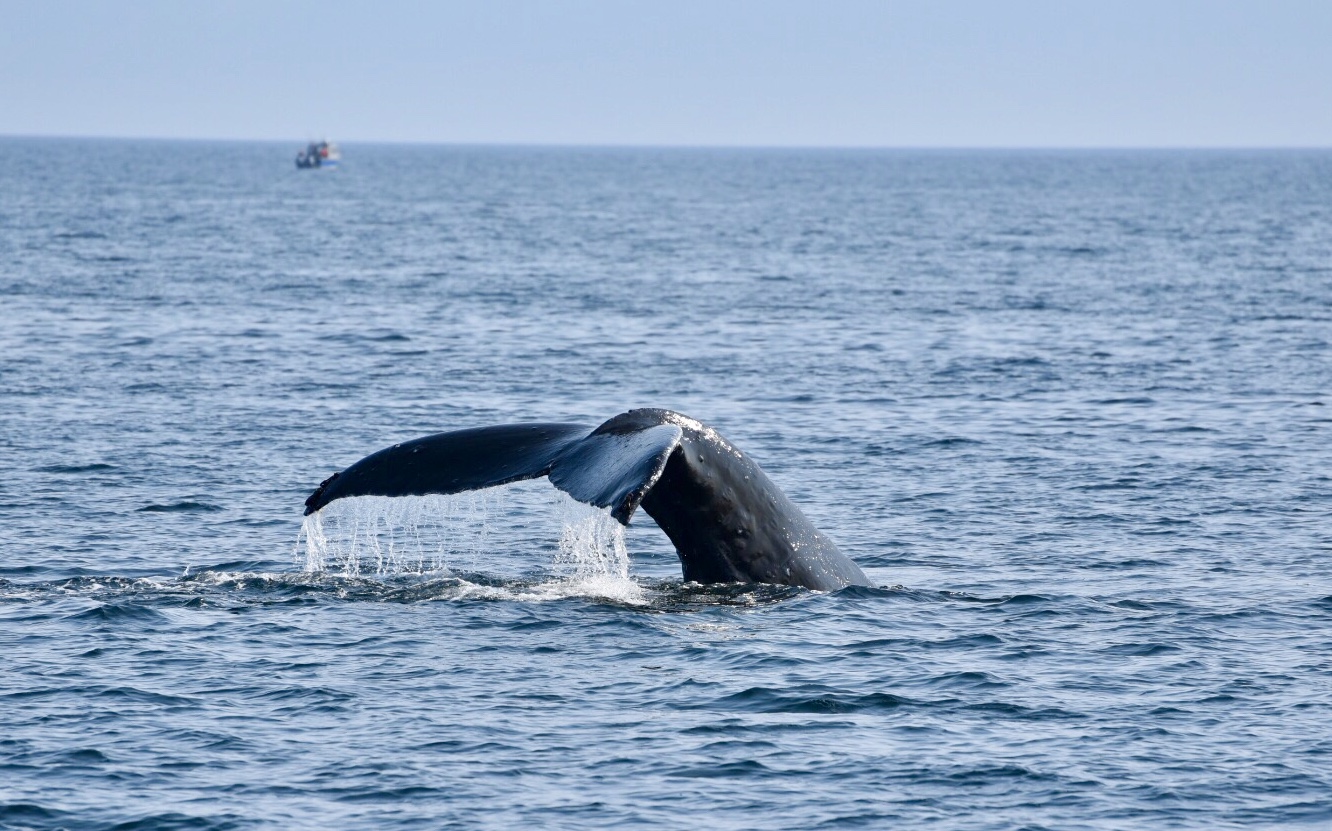