The Bears of Pack Creek: Part One

Leaving Frederick Sound, we enter Seymore Canal with sightings of spouts rising from the ocean surface. Humpback whales are feeding all around. 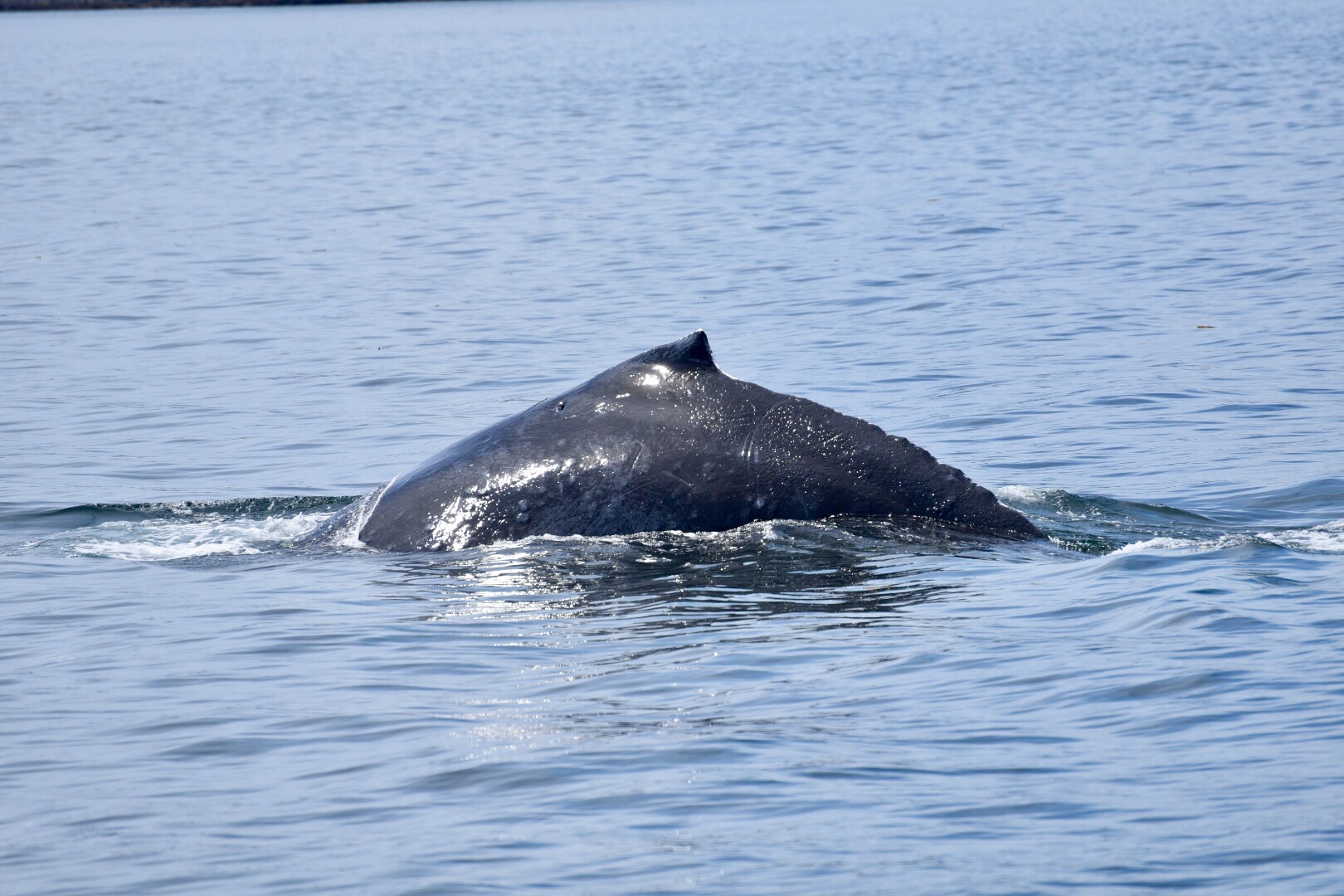 Our destination is Pack Creek Bear Preserve 11 miles up the canal on Admiralty Island. 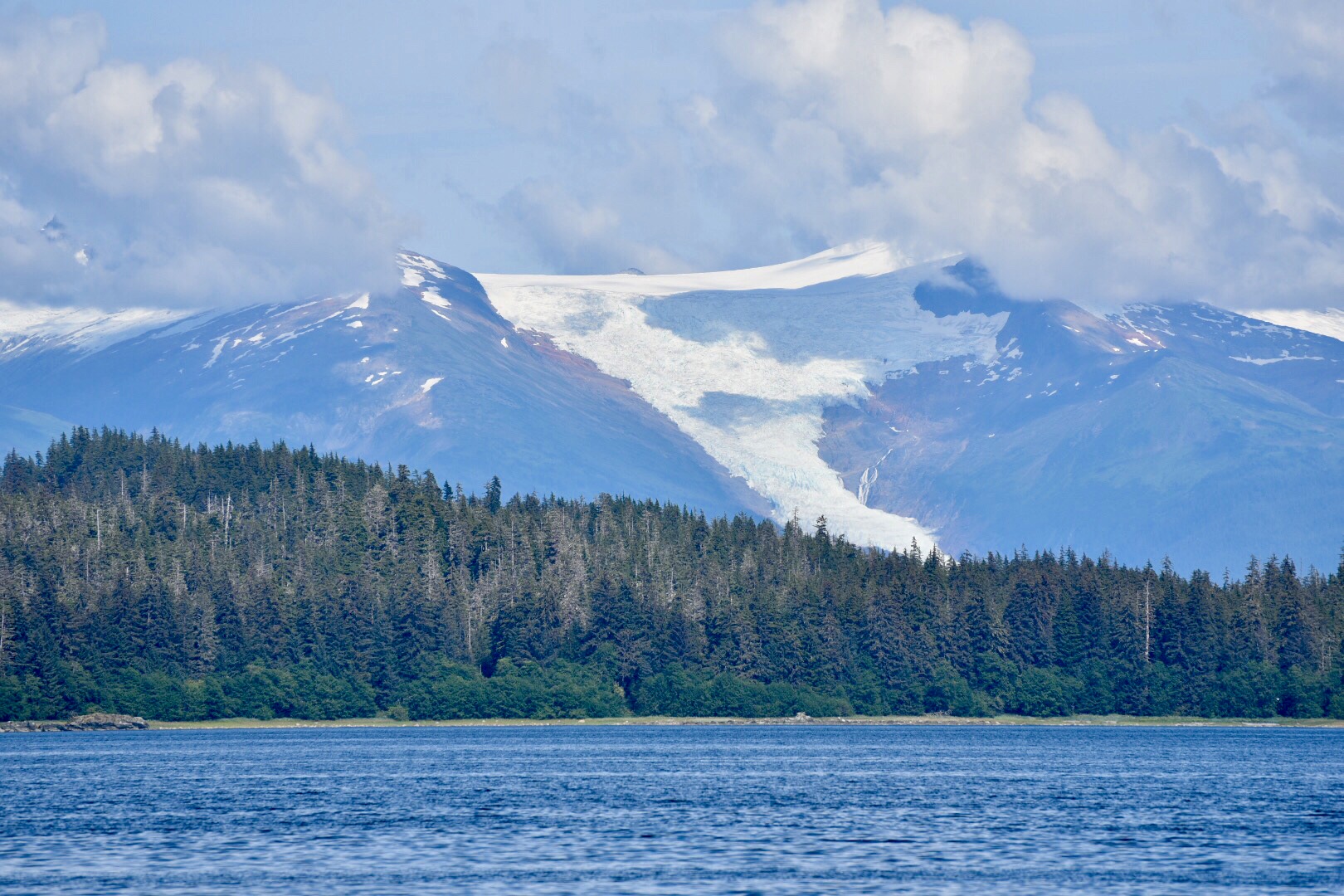 The dolphins soon join us for an escort up the bay. They seem so carefree as they play in our bow wake.

Anchoring just off the bear preserve is a challenge as the commercial crabbers have taken up most of the shallow sand spit with their traps. We tuck into a spot careful not to encroach on the Forrest Services’ “clothesline System” for dinghy tie up. We have a permit for entry tomorrow and we will be using this system then to secure our dinghy while visiting Pack Creek. Within 30 minutes of anchoring, we spot our first brown bear as a lone male causally works his way up the shoreline on his nightly low tide walk. 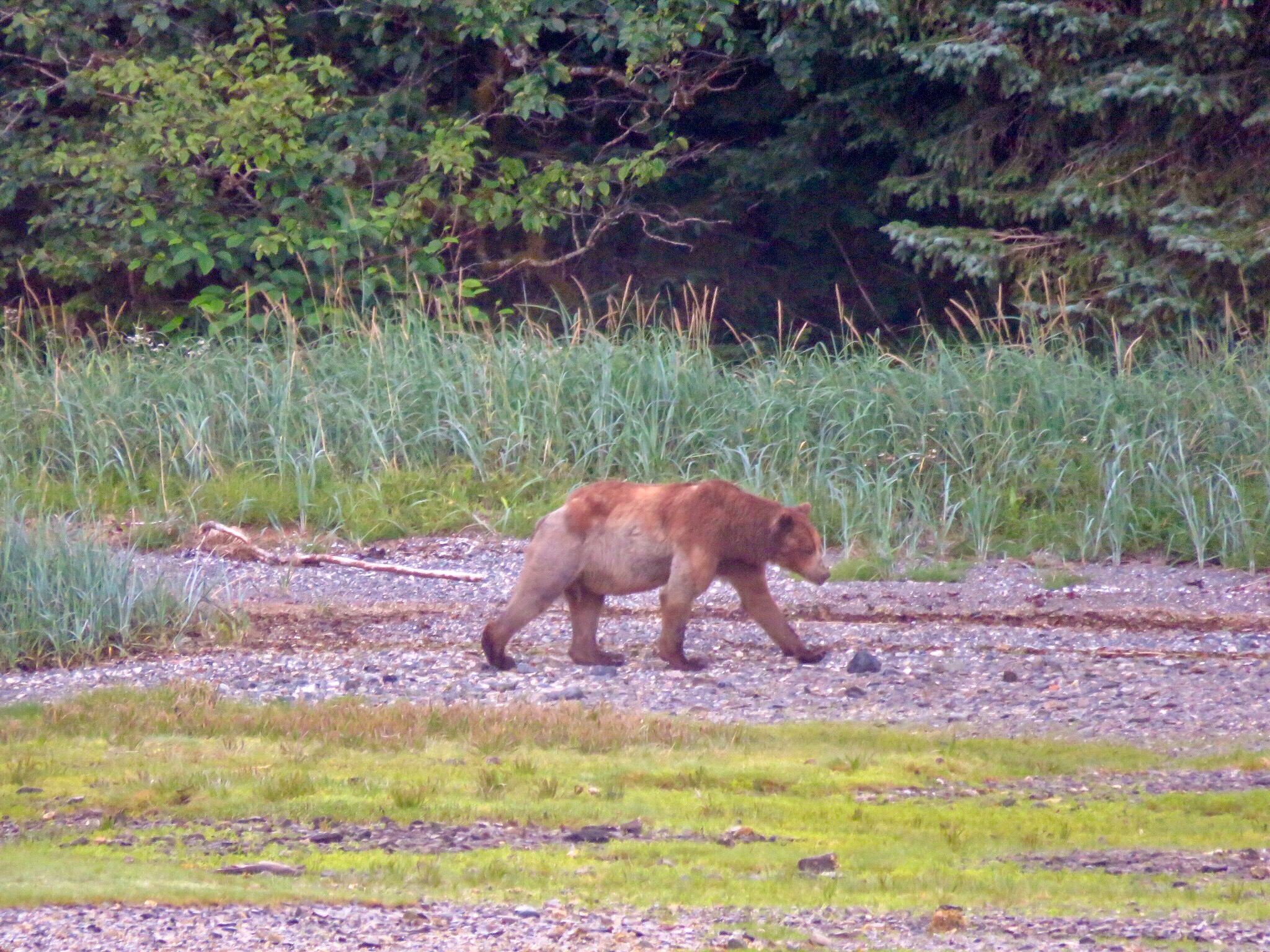 Admiralty Island is home to over 1600 brown bears. They outnumber humans nearly 3 to 1. The Tlingit name for the island is Xootsnoowu which mean “ Fortress if the Bears”. Between June 1st and September 10th, a Permit is required to enter the Pack Creek bear viewing area. Only 24 permits are issued per day, 12 to private individuals like us and 12 to tour operators. Many of the visitors arrive by a 30 minute float plane ride from Juneau. We applied for our permits four months ago and are very excited to visit this special place with our niece and nephew, Courtney and Storm.

Pack Creek has been a popular bear viewing area since the 1930’s. Although bear hunting has been prohibited here since 1934, more than 95% of Admiralty Island remains open to hunting. In 1990 the Stan Price Wildlife Sanctuary was created encompassing 60,800 acres. Stan Price was know as “ The Bear Man”. He homesteaded this land in the 1930’s and learned to peacefully coexist with the native brown bear population. He live on the island for 40 years until he died of cancer in 1989. Stan was known far and wide as “ the bear man of Pack Creek”. After his death, a joint venture was created between the Forrest Service and U. S. Fish and Wildlife to protect both the bears and humans from harm. Many people were coming to the island after hearing about the legend of Stan Price and safety was a concern. This remains a wilderness area and is monitored by four rangers living on a nearby island who commute daily by small boat to Pack Creek.

Just as we are about to radio for permission to go ashore, a mom with two cubs in tow appears on the beach. 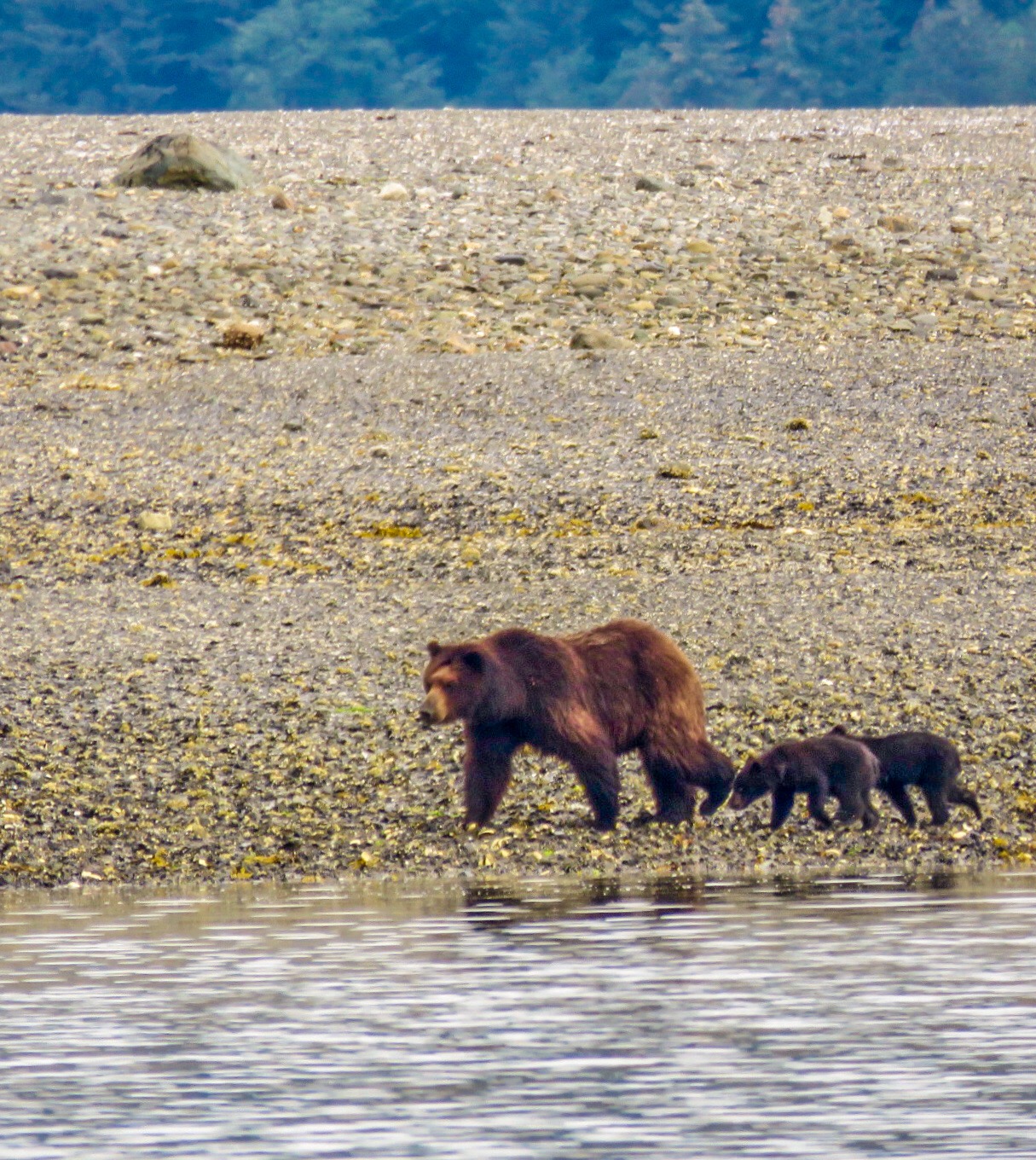 Once they meander off into the underbrush, we have clearance to proceed to the island. Ranger Lucas meets us on the beach and instructs us how to secure our kayaks to the outhaul lines so they are not left on the beach at low tide for inquisitive bears to destroy. 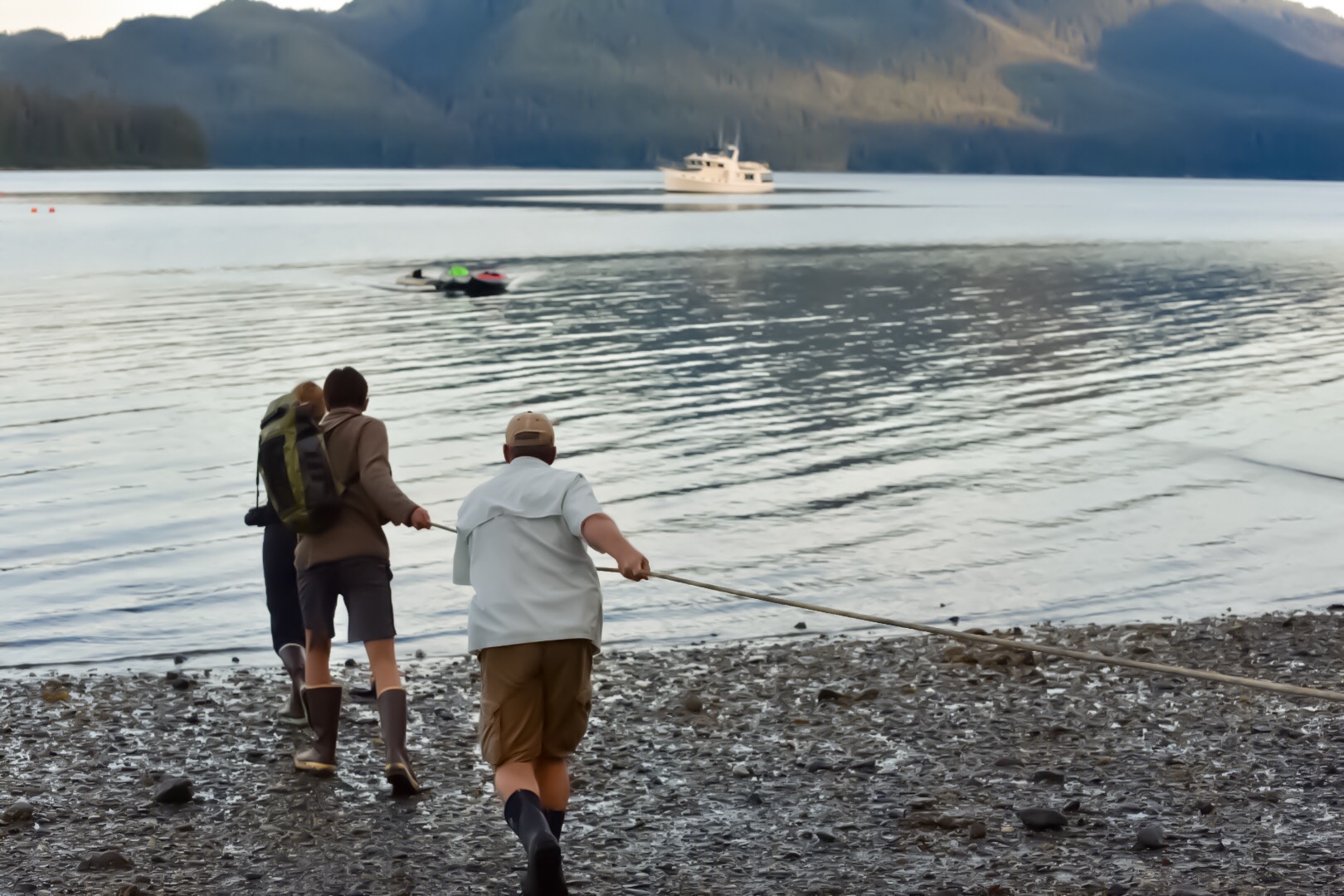 We are then briefed on the rules of the island. Any food must be stored in the lockers which are built into the ground. We are given access only to the viewing spit or a one mile hike through the forrest to the observation tower. After radioing the ranger at the viewing spit, we are cleared for a ½ mile shoreline walk to this overlook area. Lucas warns us to stay well off the bushy shoreline and make plenty of noise so as not to surprise a bear.

Being a very very warm summer day, not much bear activity is occurring at the viewing area, so we opt for the shady woods trail hike to the observation tower. We cautiously enter the dense forrest as this is where we saw the mom and two cubs exit an hour earlier. As instructed, we make lots of noise on the trail. We each have a bear pepper spray and Jeff has his pistol for additional protection. It it a little eerie walking the trail as we see fresh bear scat every 100 feet. I keep reminding myself that no bears or people have ever been harmed here at Pack Creek. These bears are habituated to the presence of humans. You just don’t want to surprise them or get between a mom and cub. We hear several thrashings in the bushes but never encounter a bear along the trail.

The observation tower is a welcome sight. 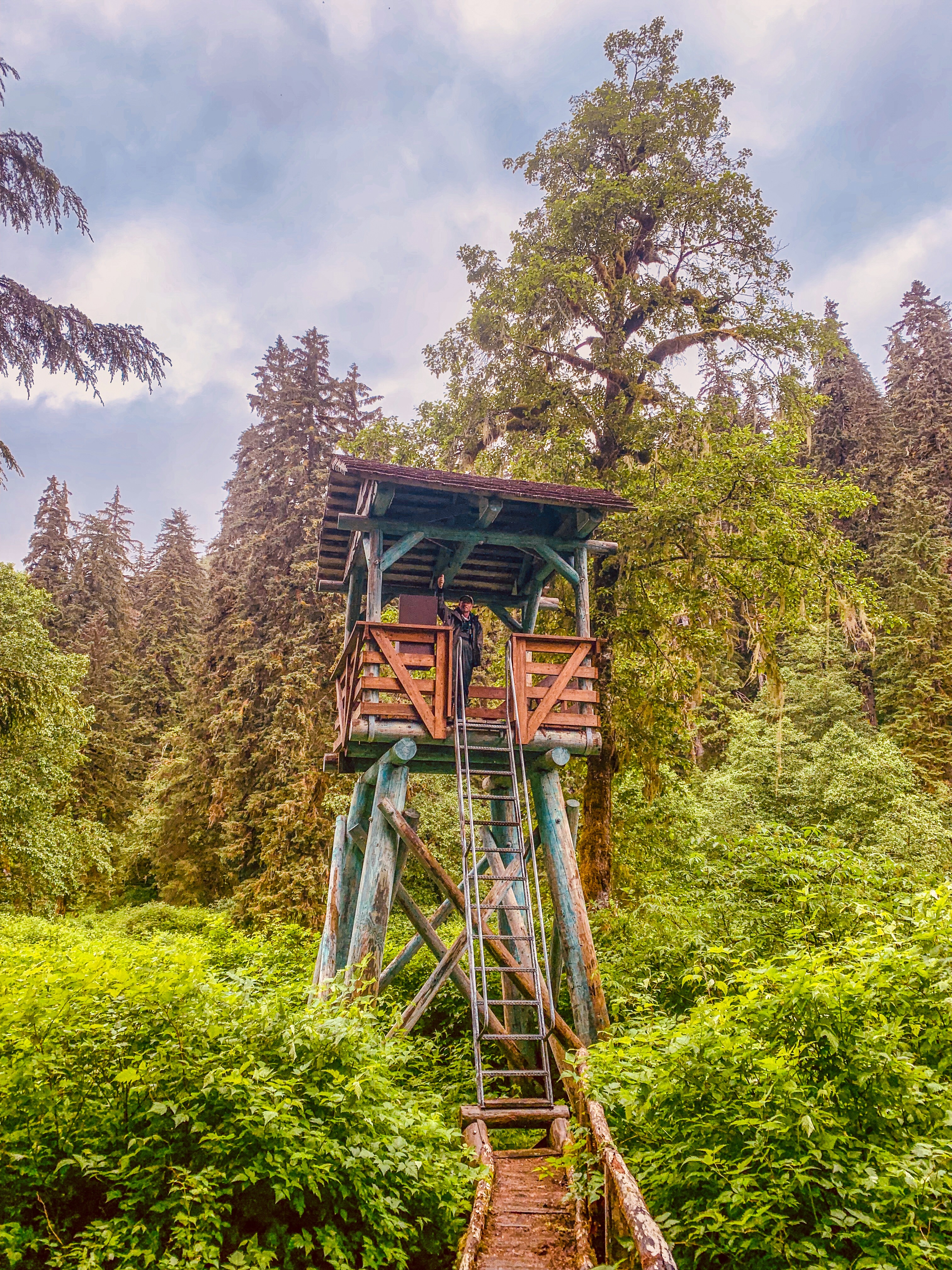 As we climb the 20 ft ladder to the safety of the platform overlooking a salmon stream, we can hear the sounds of a bear splashing in the water below us. We quietly and patiently wait for the bear to appear as he moves upstream looking for salmon. Within ten minutes he walks directly below us and forages in the bushes. 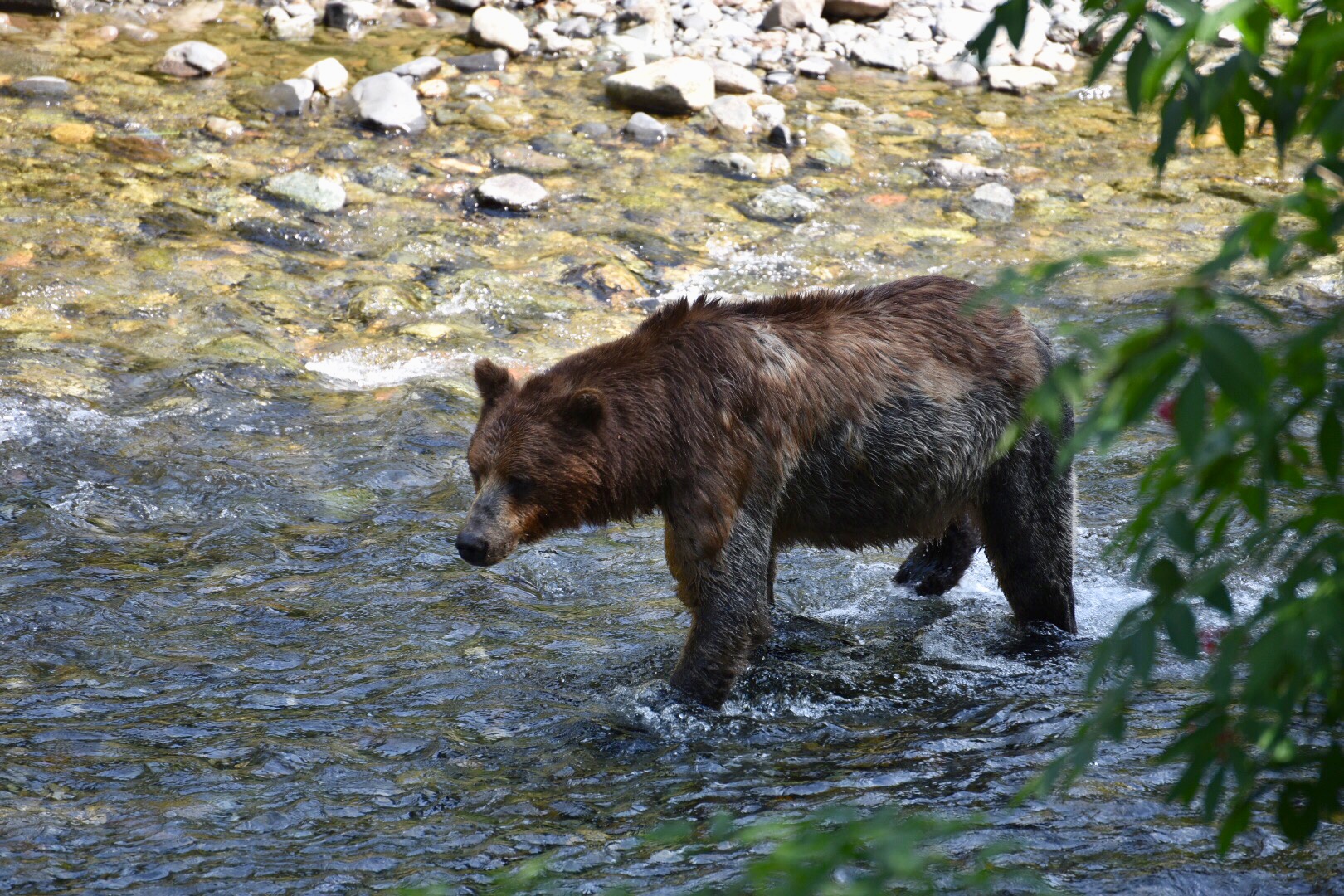 We recognize him as same male bear we saw on the beach yesterday. He has numerous bald spots on his hind quarts and walks with a limp. Another brown bear appears just upstream. It is amazing to be so close to these bears as they fish for salmon in the stream below us.

After about twenty minutes they move on and we take advantage of this break in the bear action to quickly and noisily hike the trail back to the beach.

It is now midday and most of the bears are probably relaxing in the cool shade. The ranger feels the bear activity will be quite good this evening. We will take a lunch break and be back by 5 pm. 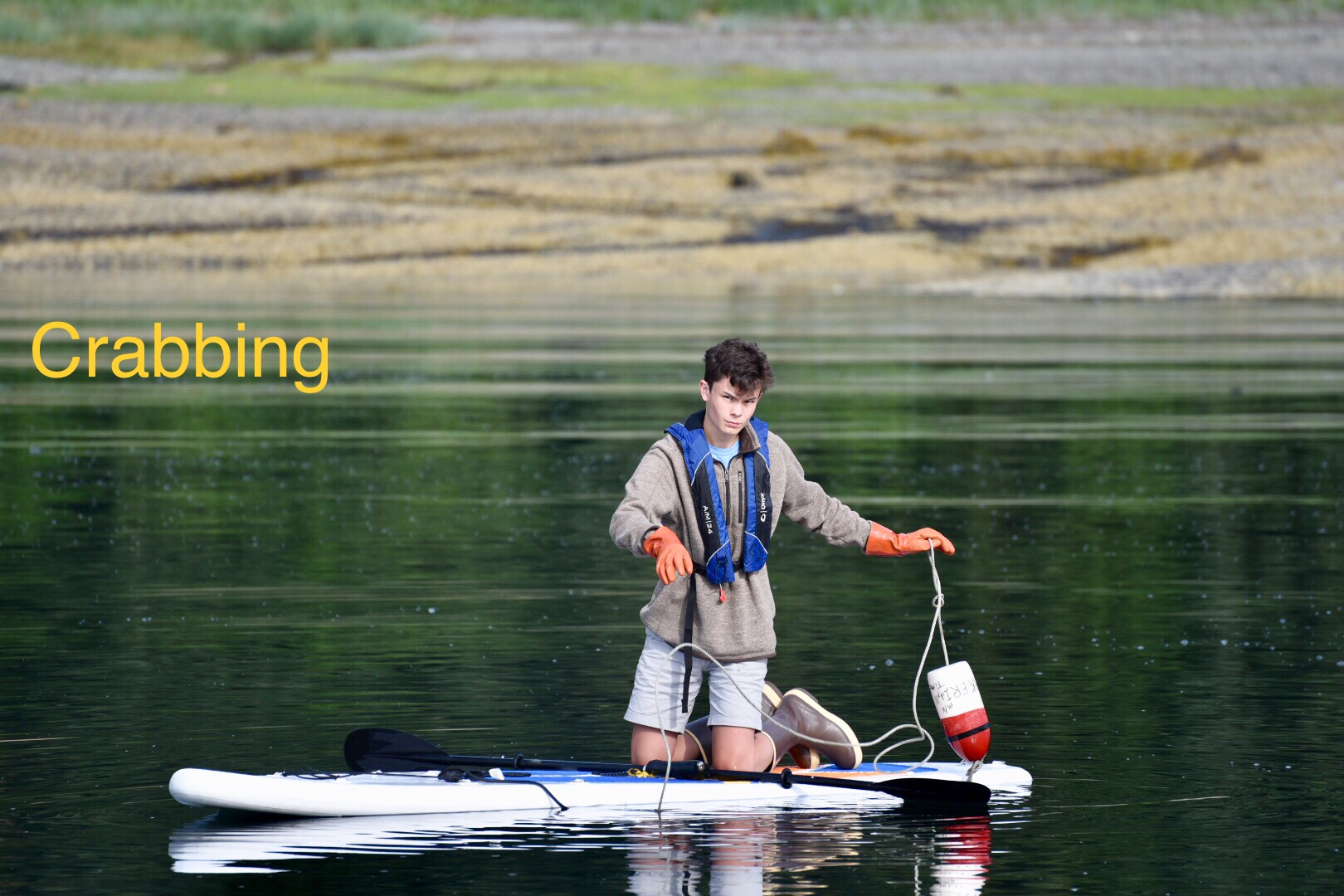 Now we have crab traps to pull and more crabs to pick. 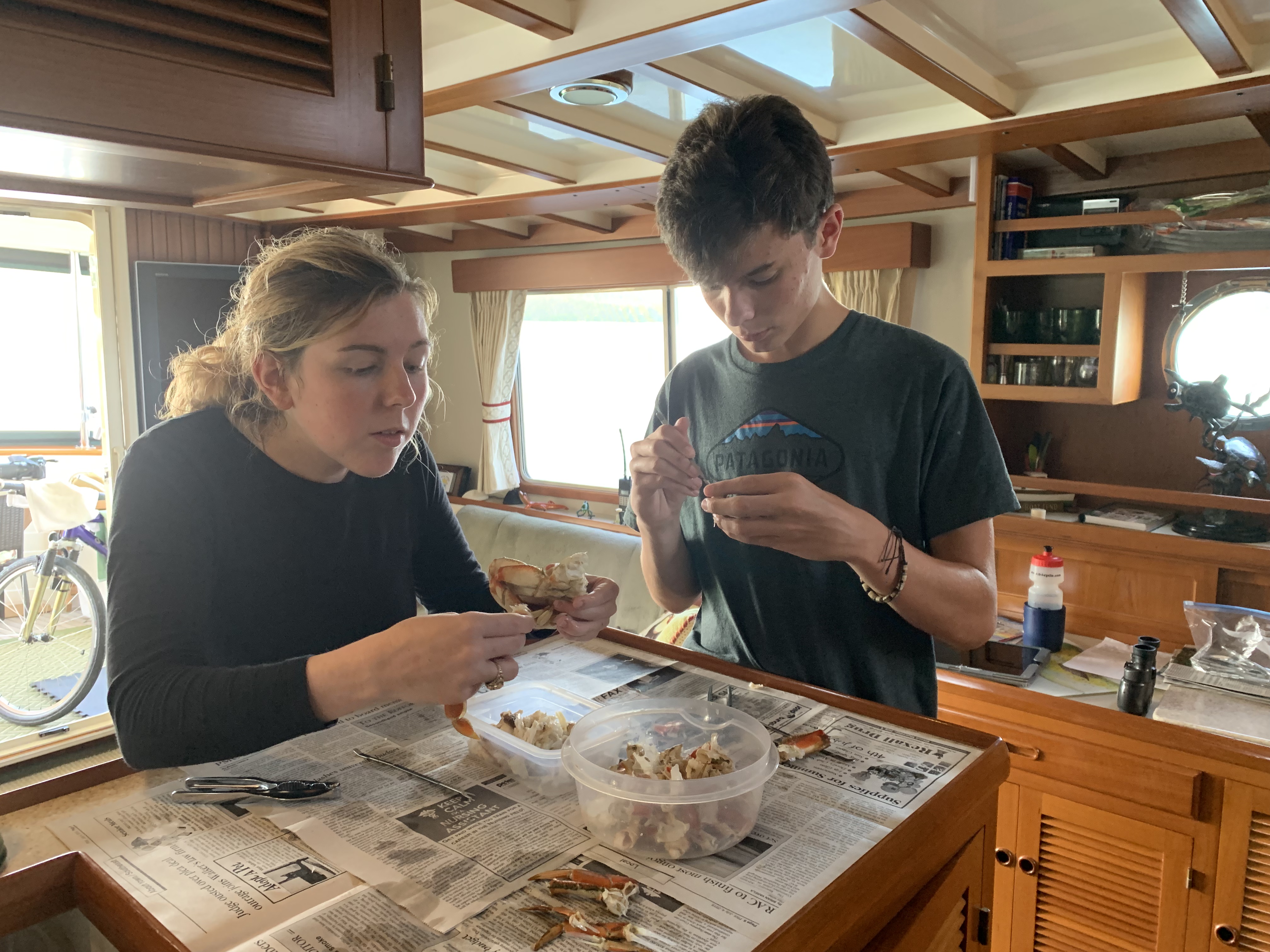