We were told by another boater that there were lots of bears in Pavlof Harbor so we set this as our next destination. Leaving our anchorage in Takatz Bay we travel 53 miles north on Chatham Strait. Just inside Freshwater Bay is our anchorage at Pavlof Harbor.

We are pleasantly surprised to find the anchorage empty as this is one of the more popular bear viewing spots. A float plane has just dropped off 8 people on the beach to begin a several hour bear tour. Just after anchoring, a Nat Geo cruise ship appears and anchors in the outer bay. So much for our solitude. 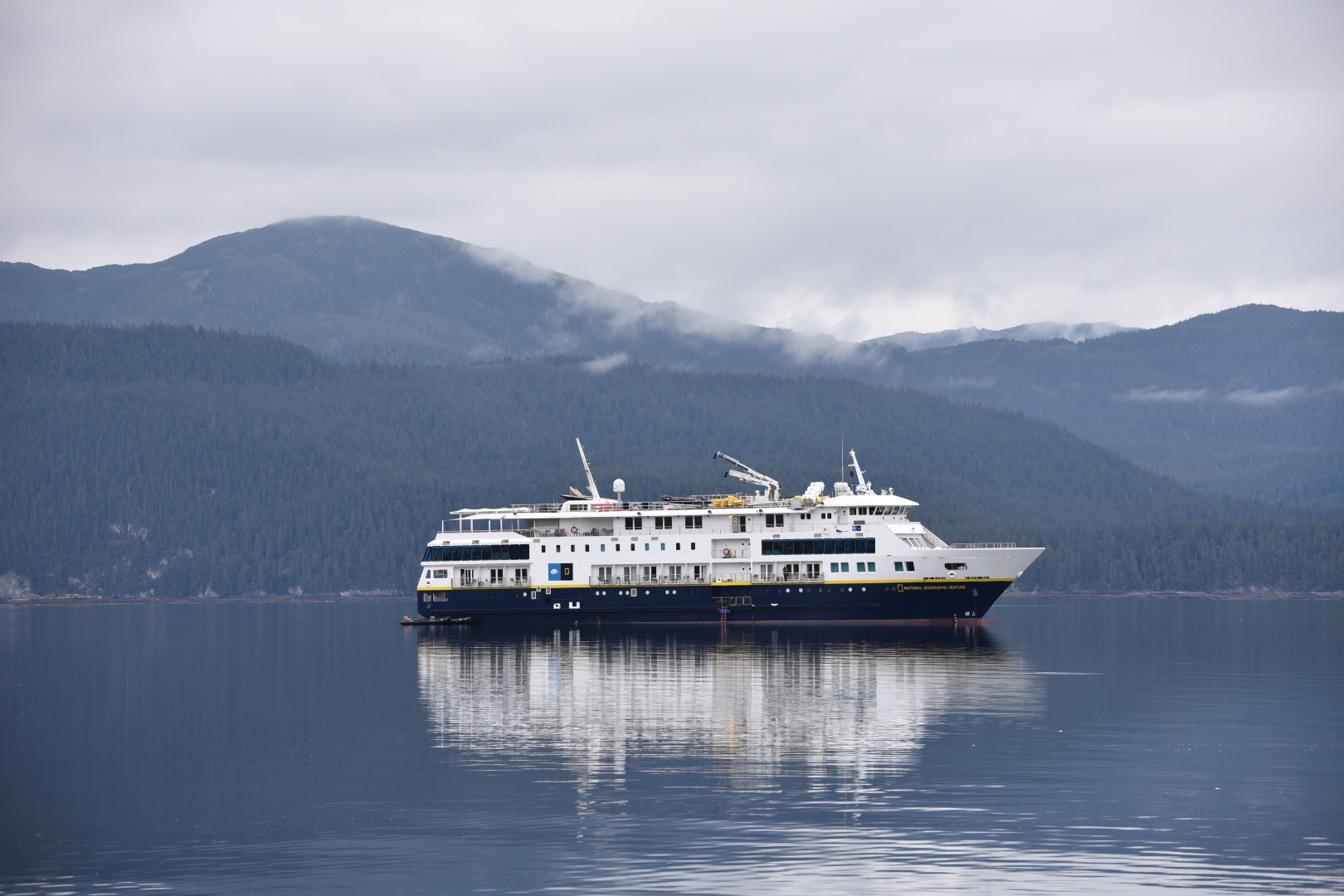 We quickly deploy the kayaks and paddle up the stream to a small landing just below the waterfalls. Here there is a state designated bear viewing area for safely watching bear fishing activities. The sign warns not venture further up stream from this point. The float plane folks are already here. 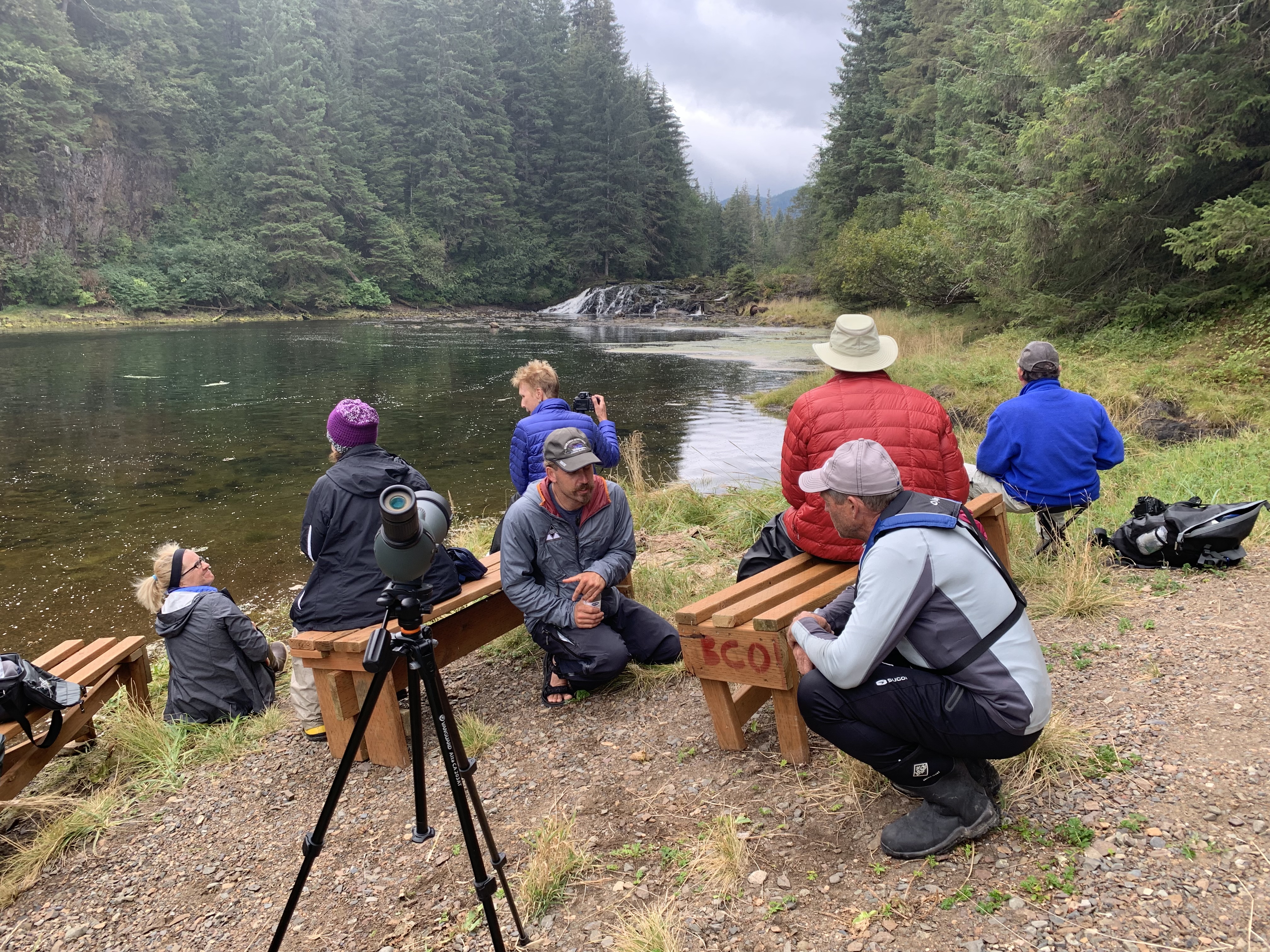 Within 30 minutes a solitary bear makes a brief appearance as he strolls across the upper falls. 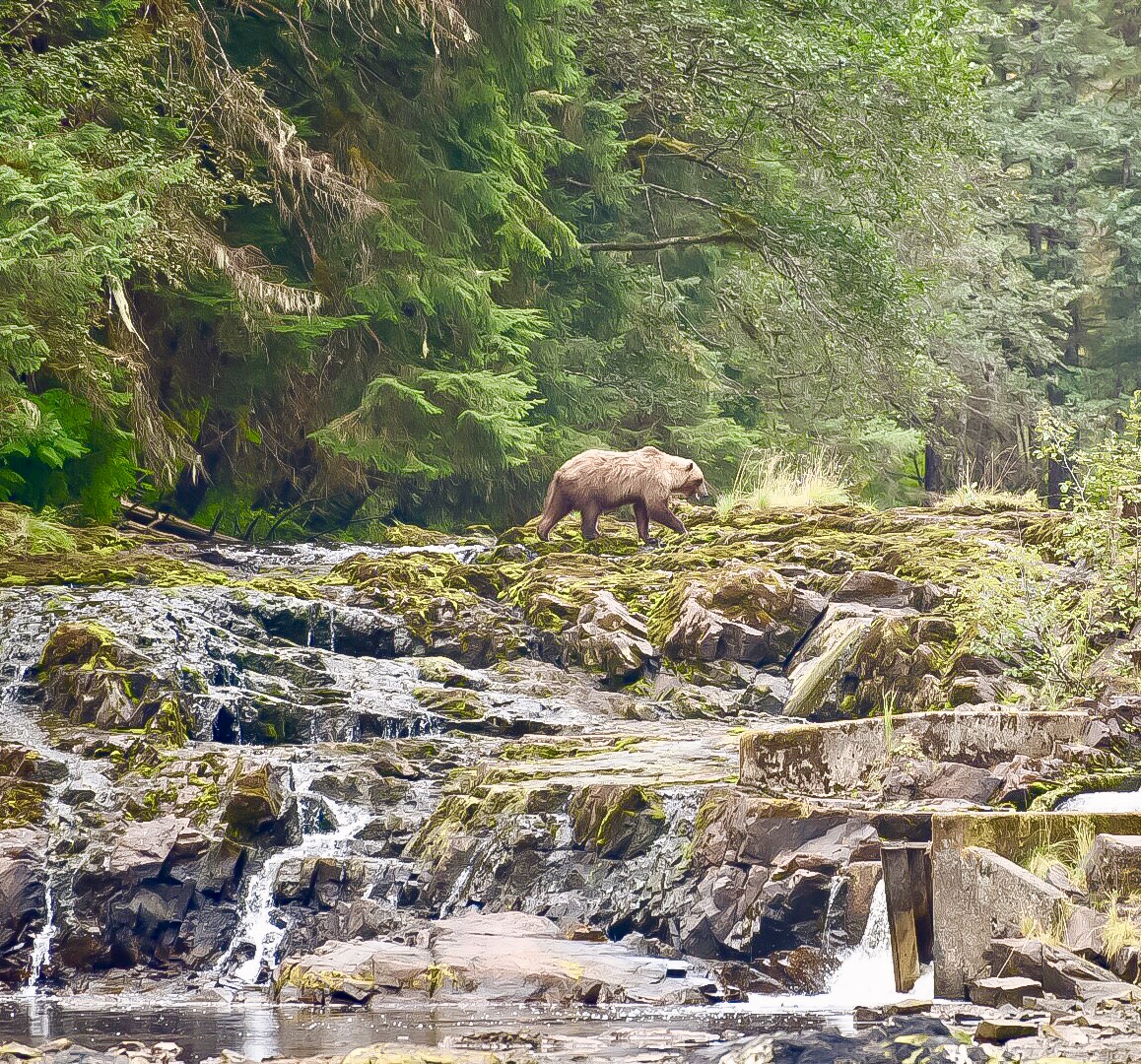 Unfortunately we are soon invaded by bright orange kayaks and zodiacs filled with red jacketed tourists from the Nat Geo boat. 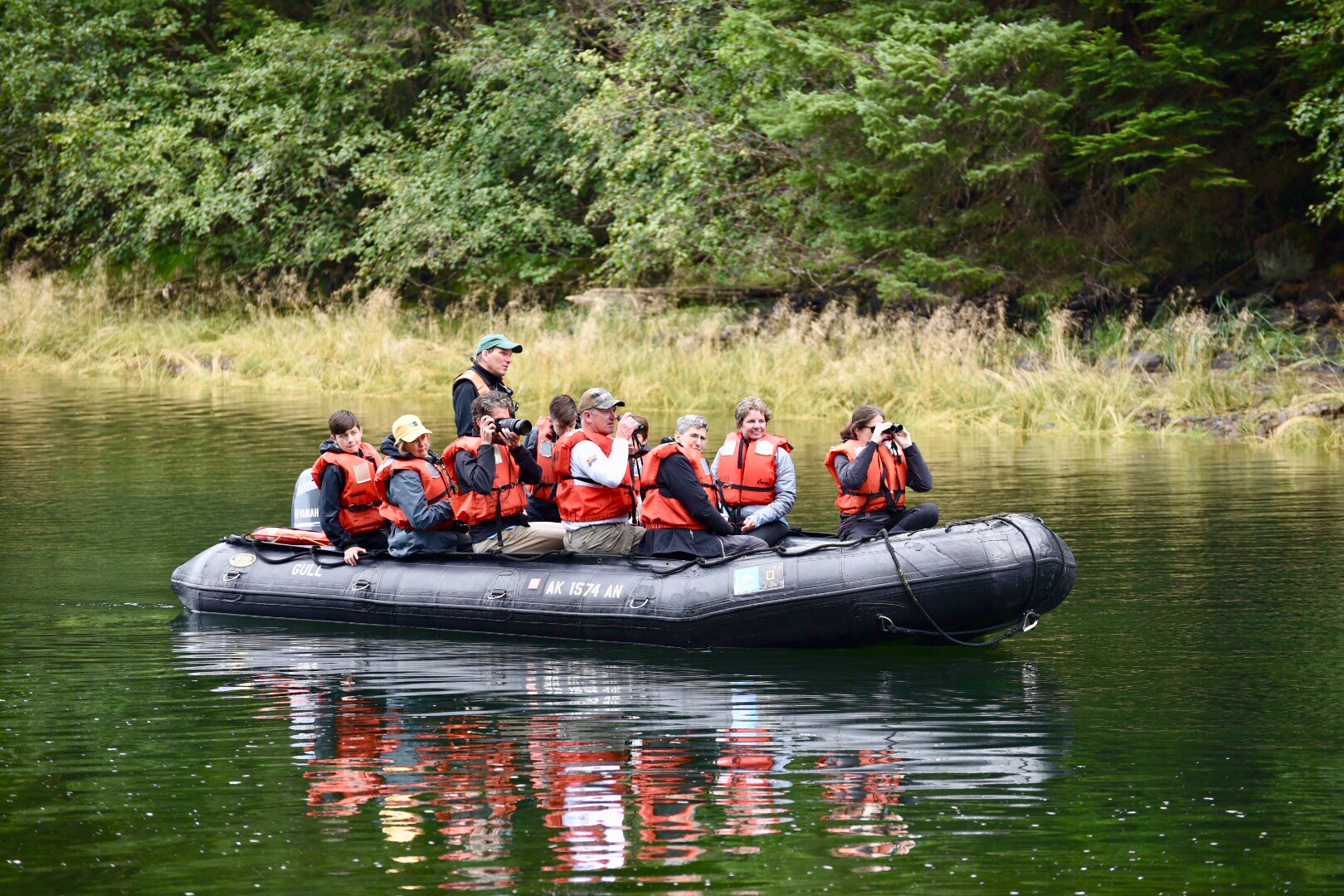 With all of this commotion, our chance of seeing more bears has diminished greatly. We will come back this evening when it is quieter.

We have no chance of seeing bears in the anchorage either today as now a second Nat Geo ship has arrived. The harbor is abuzz with float planes coming and going, kayakers, and lots of noisy people. 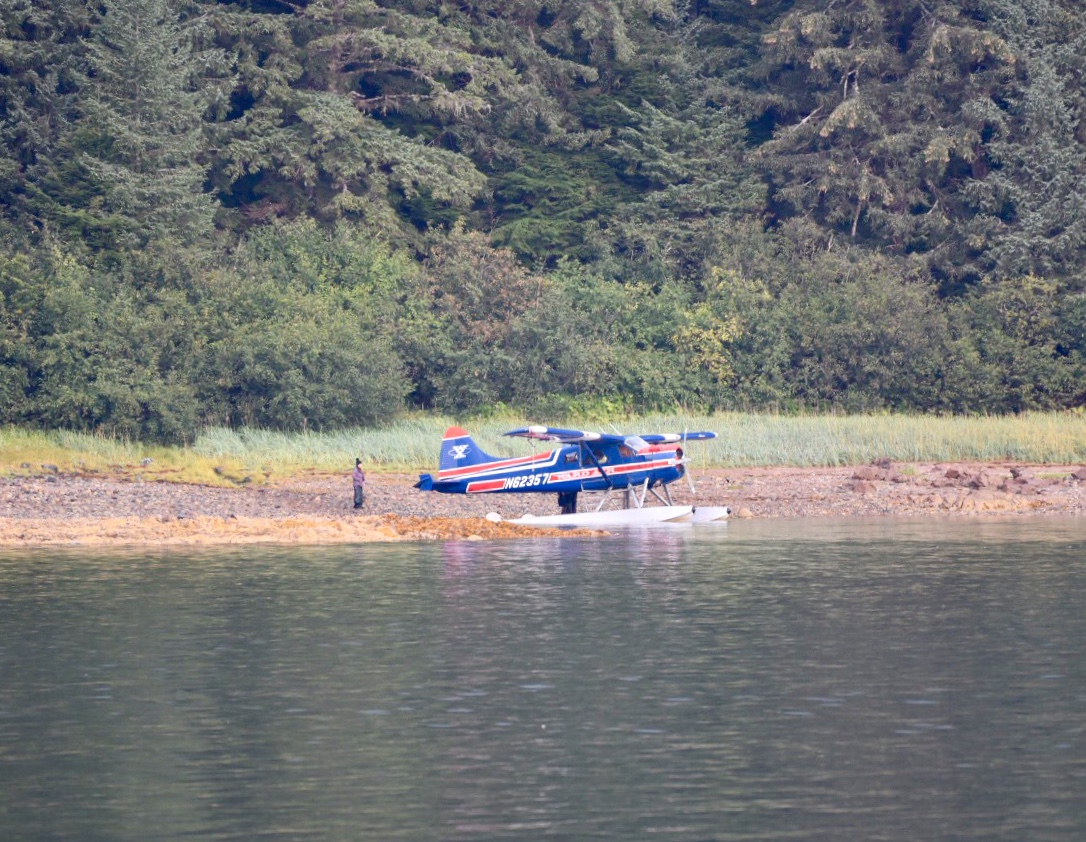 Pavlov Harbor has been discovered by the cruise ship industry. Things quiet down considerably this evening as both cruise ships move on. We kayak back to the bear viewing area after dinner. The float plane group is still here patiently waiting for the bears to arrive. They have had no sightings since we left this afternoon. It is a shame as they have paid big bucks to fly here from Juneau and have only seen one bear. Luckily, just before calling it a day, a large male appears just below the falls. 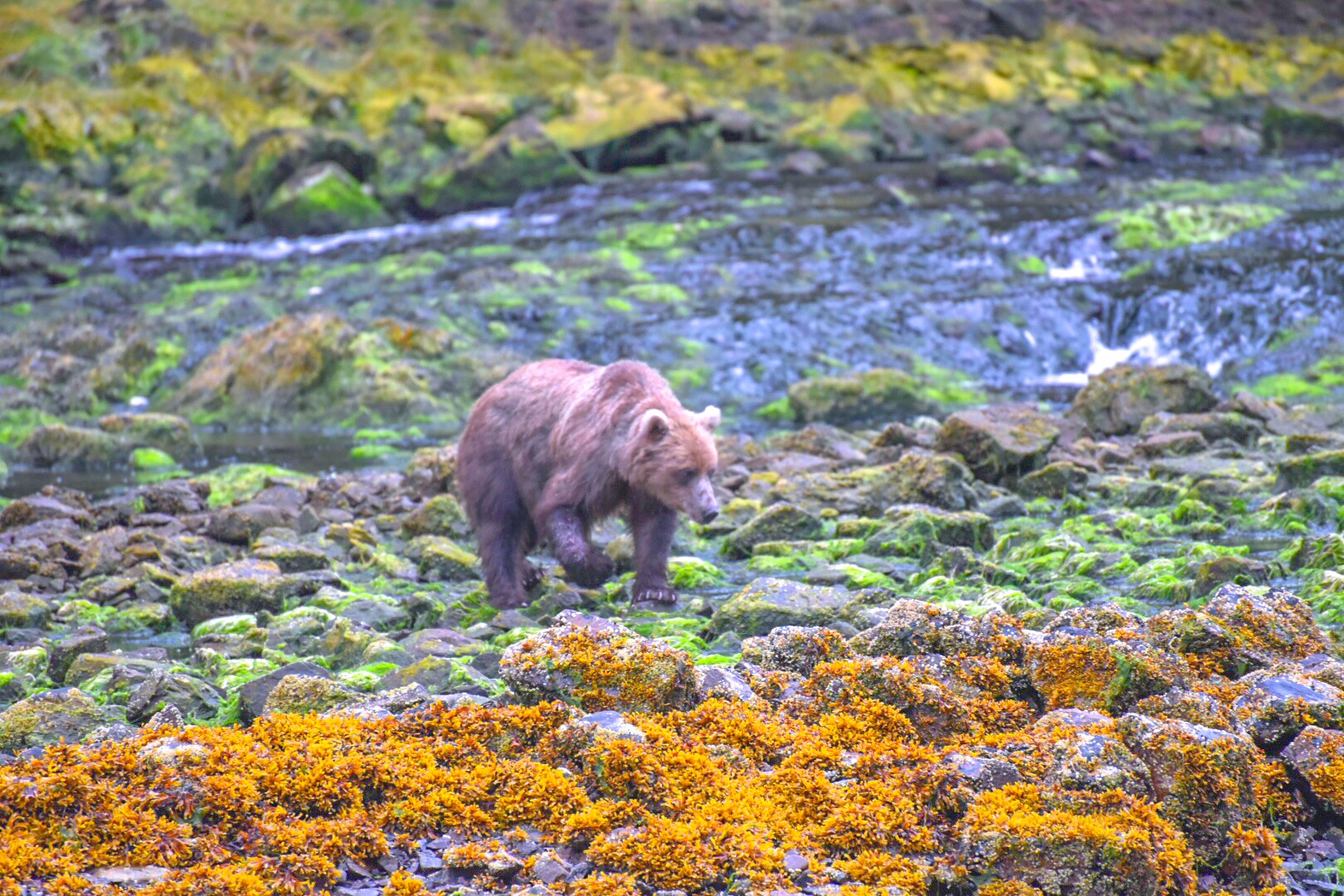 For the next half hour he casually catches several salmon. At one point he lays down in a pool to cool off and take a break. He shows no interest in our group of onlookers. 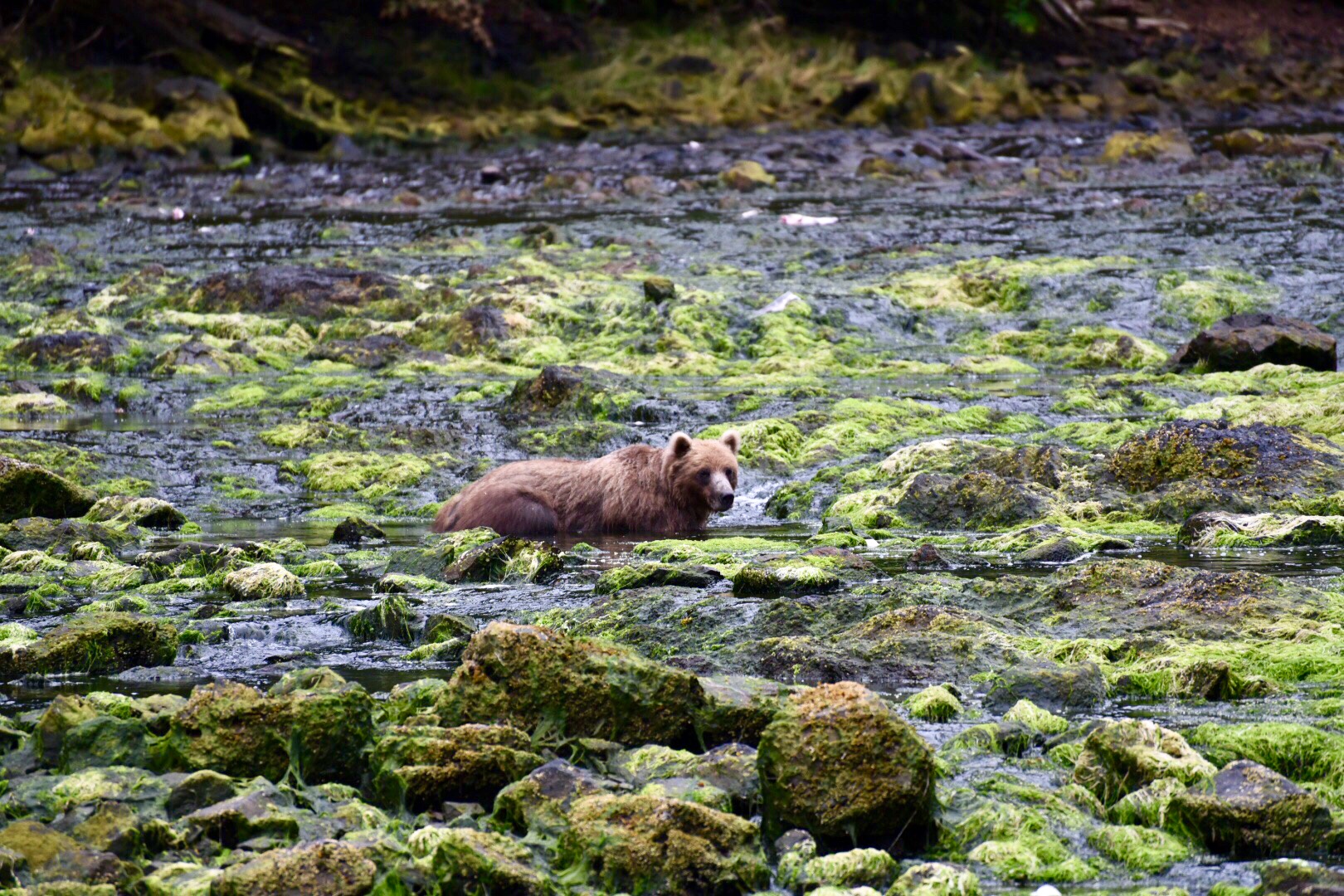 We return to the bear viewing area the next morning and have the place all to ourselves. One bear is fishing for salmon at the falls when we arrive. 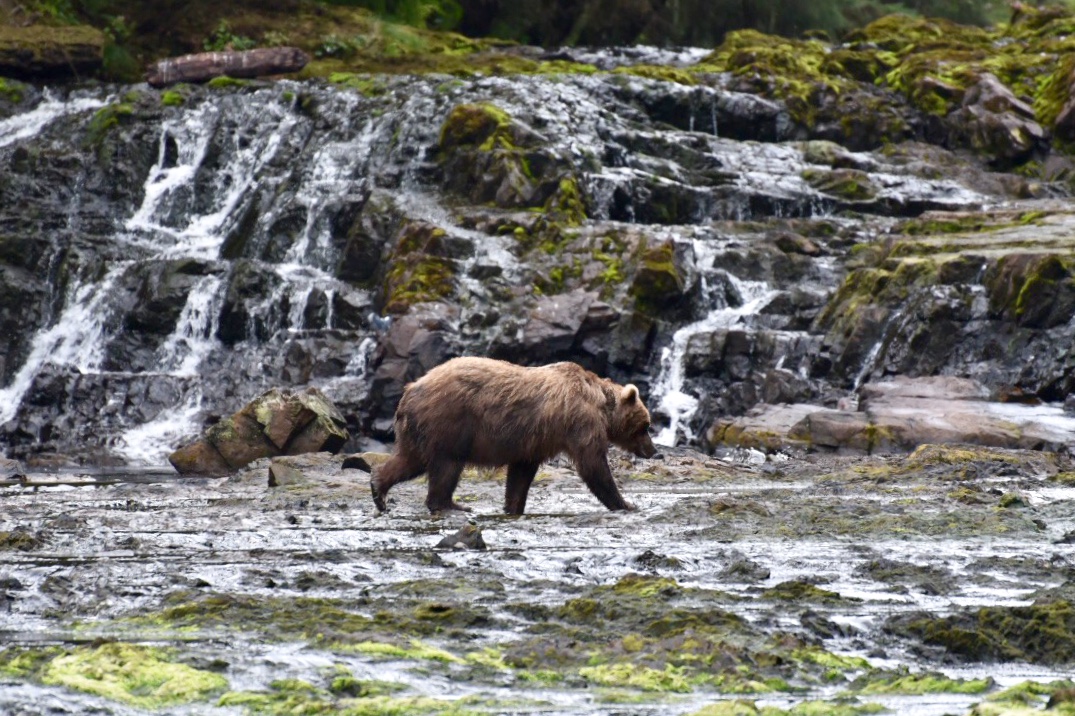 It felt relatively safe here yesterday with a group of people around. Today not so much with just the two of us here alone with the bears. Still, it is such an amazing experience to be within a few hundred feet of a wild brown bear. He doesn’t acknowledge our presence and continues fishing. Just after hopping into the kayaks, we are startled as a second bear suddenly appears from the woods behind us. 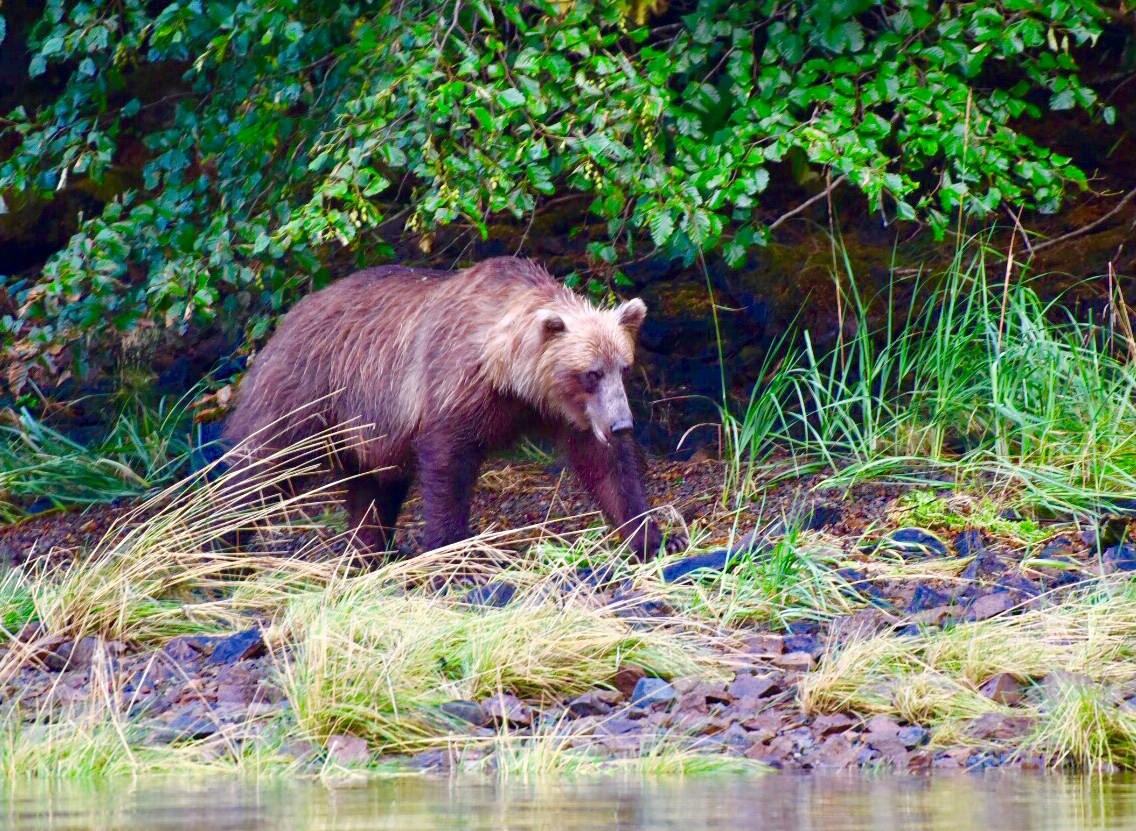 Although only 100 feet away, we are more secure by being in the kayaks and not on shore. This bear cautiously moves past us on her way to the salmon stream. After our heart quits racing, we ease the kayaks closer and enjoy watching as these two bears gorge themselves on salmon.

Pavlof was another great stop with three quality bear sightings. 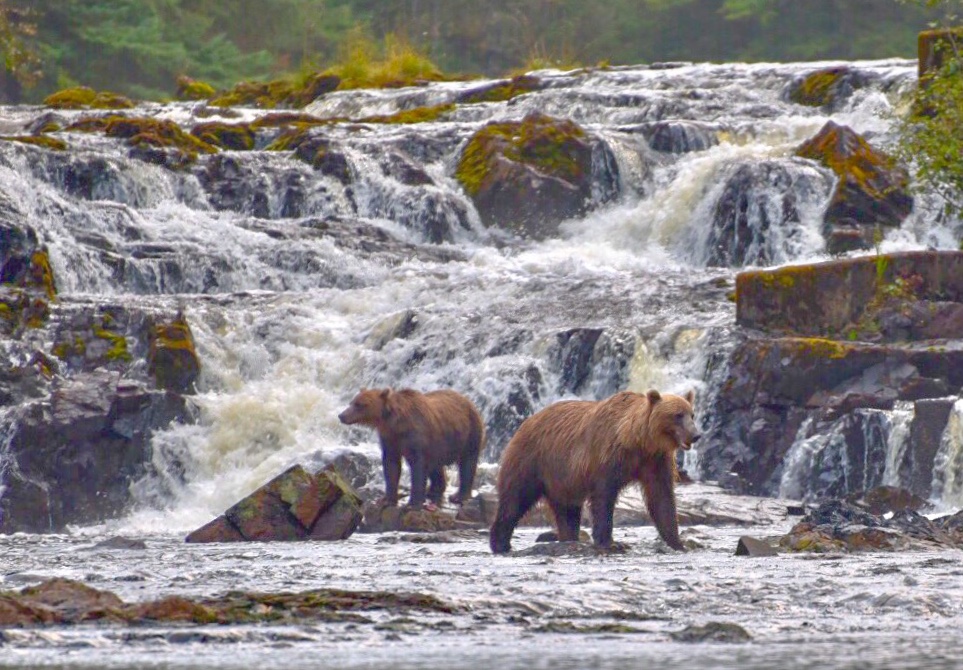 A nasty storm is brewing in the Gulf of Alaska. Gail warnings are forecast in several days. Where do we want to hunker down while this weather system passes? We decide to head for the Tlingit Village of Hoonah to ride out the storm. They have an excellent harbor for protection of weather and winds. In fact the Tlingit name for Hoonah, Xunaa, translates as “ protection of the north wind”.

As we make our approach into Hoonah we see the cruise ship Crystal Syphony at the docks. 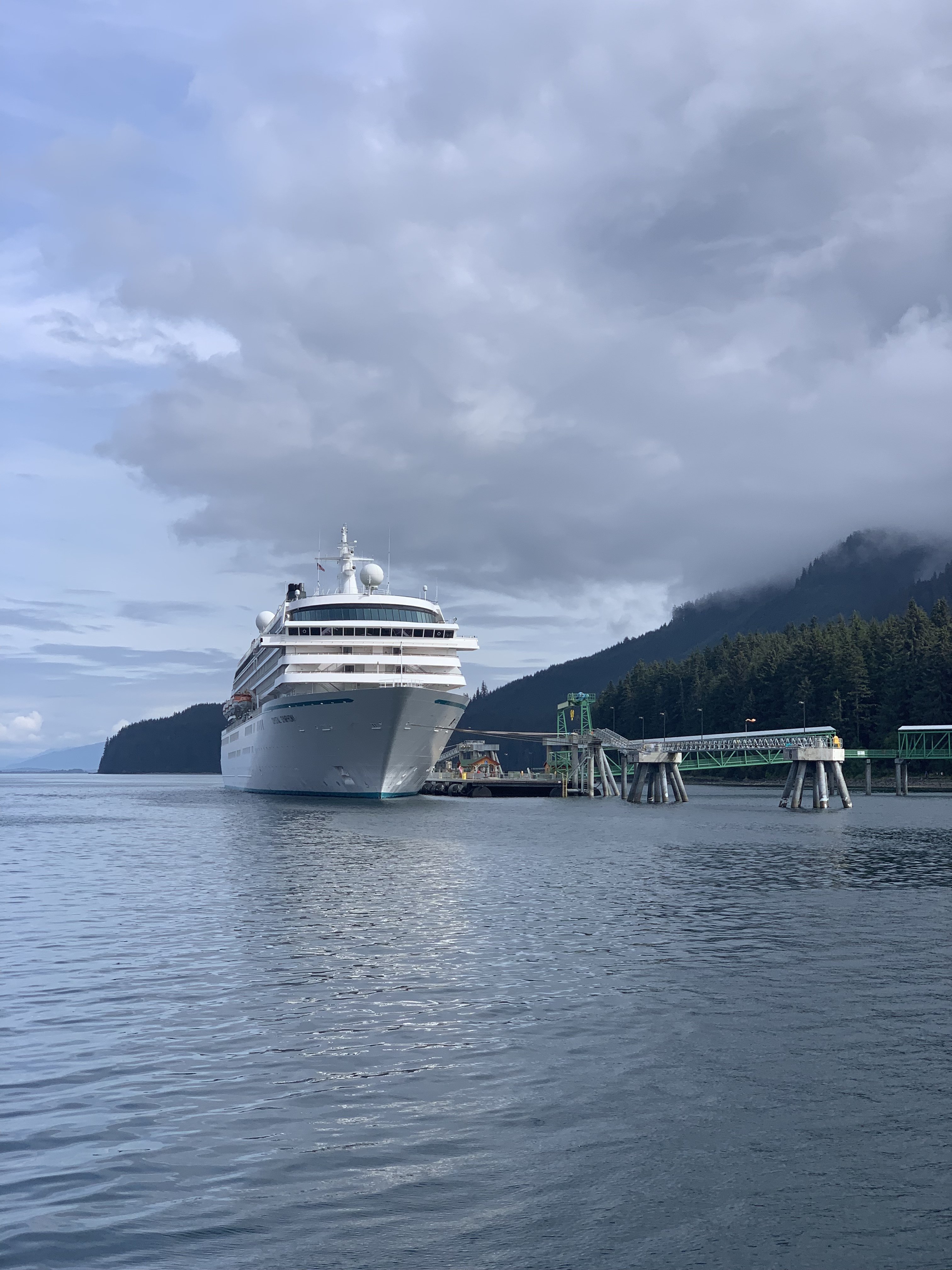 The cruise ship terminal is at the old cannery which has now been converted into a museum. 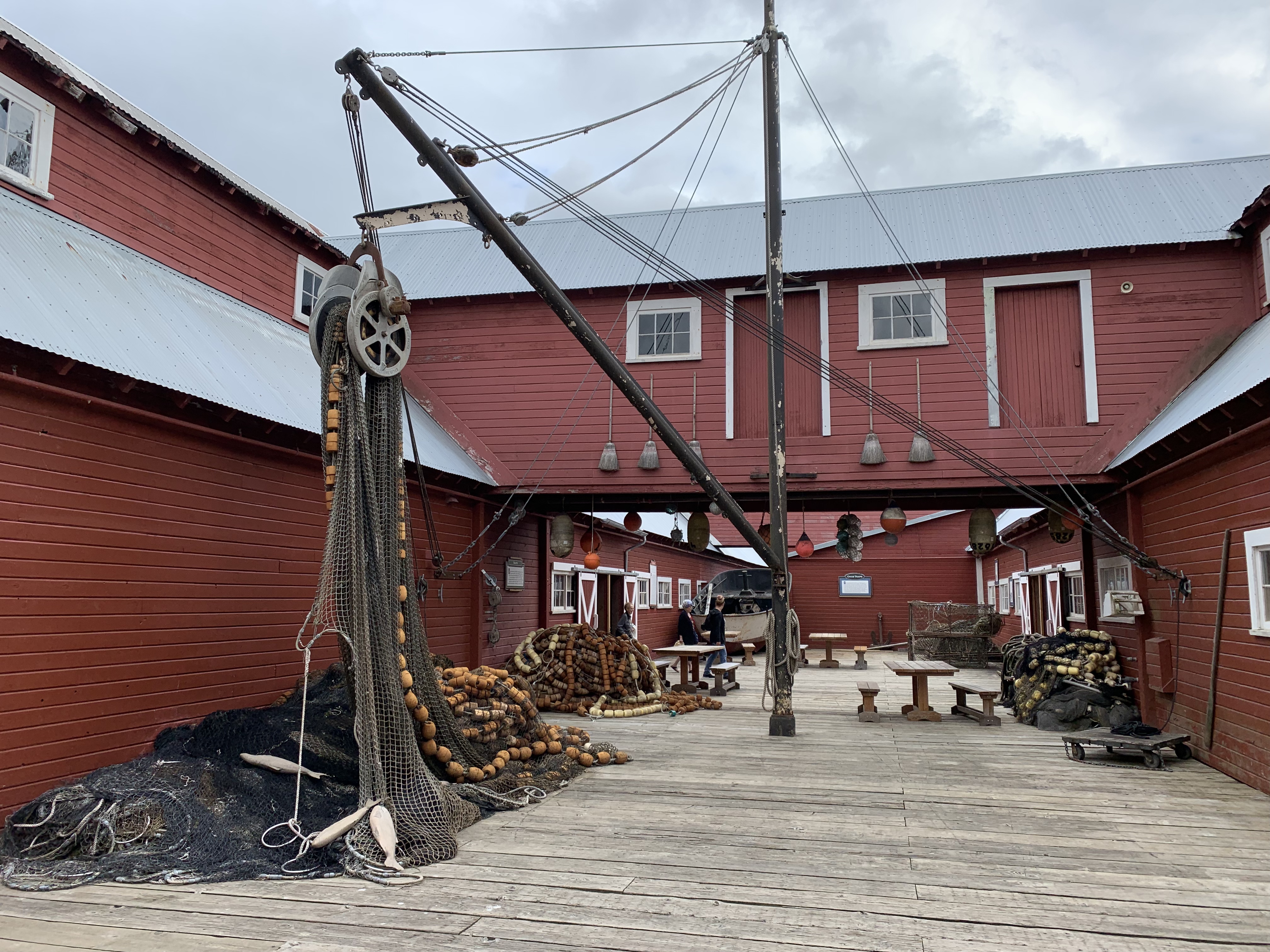 This small village of 730 natives is just starting to cater to the cruise ship industry. In fact they are in the process of constructing a second cruise ship dock. Hopefully the town can retain its native Alaska experience and not become a cookie cutter tourist town like some other cities in Alaska.

We enjoy three days exploring the town and visiting with friends on three other Krogen boats also here to wait out the storm. In the carving shed, we see a nearly finished totem. This totem will be raised and dedicated in front of the town hall next Saturday. 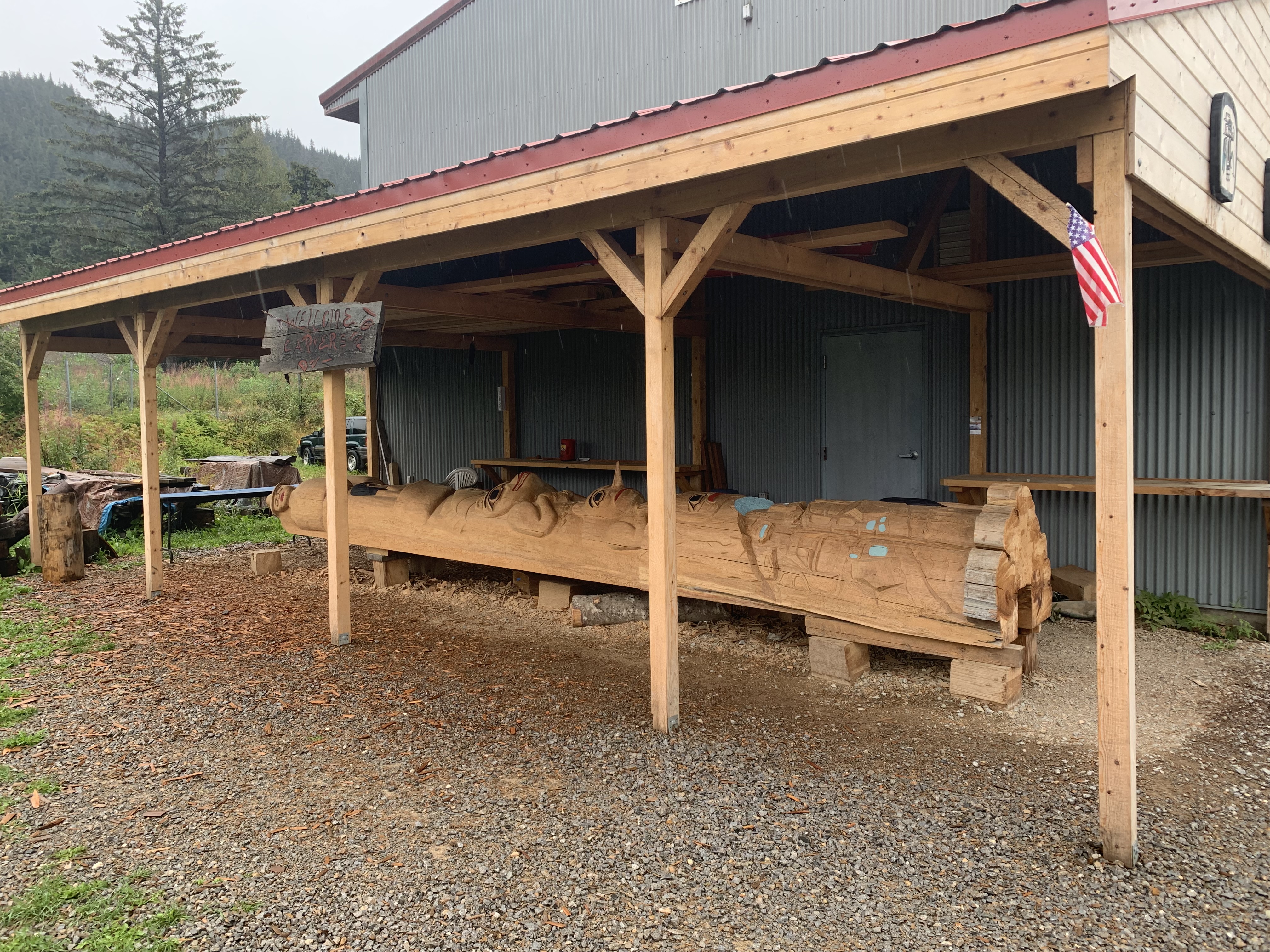 We spend one day trolling for salmon just outside the cruise ship dock. The Coho are just beginning their annual run and we manage to get our first Coho of the season. He wasn’t big in size but he was mighty tasty. 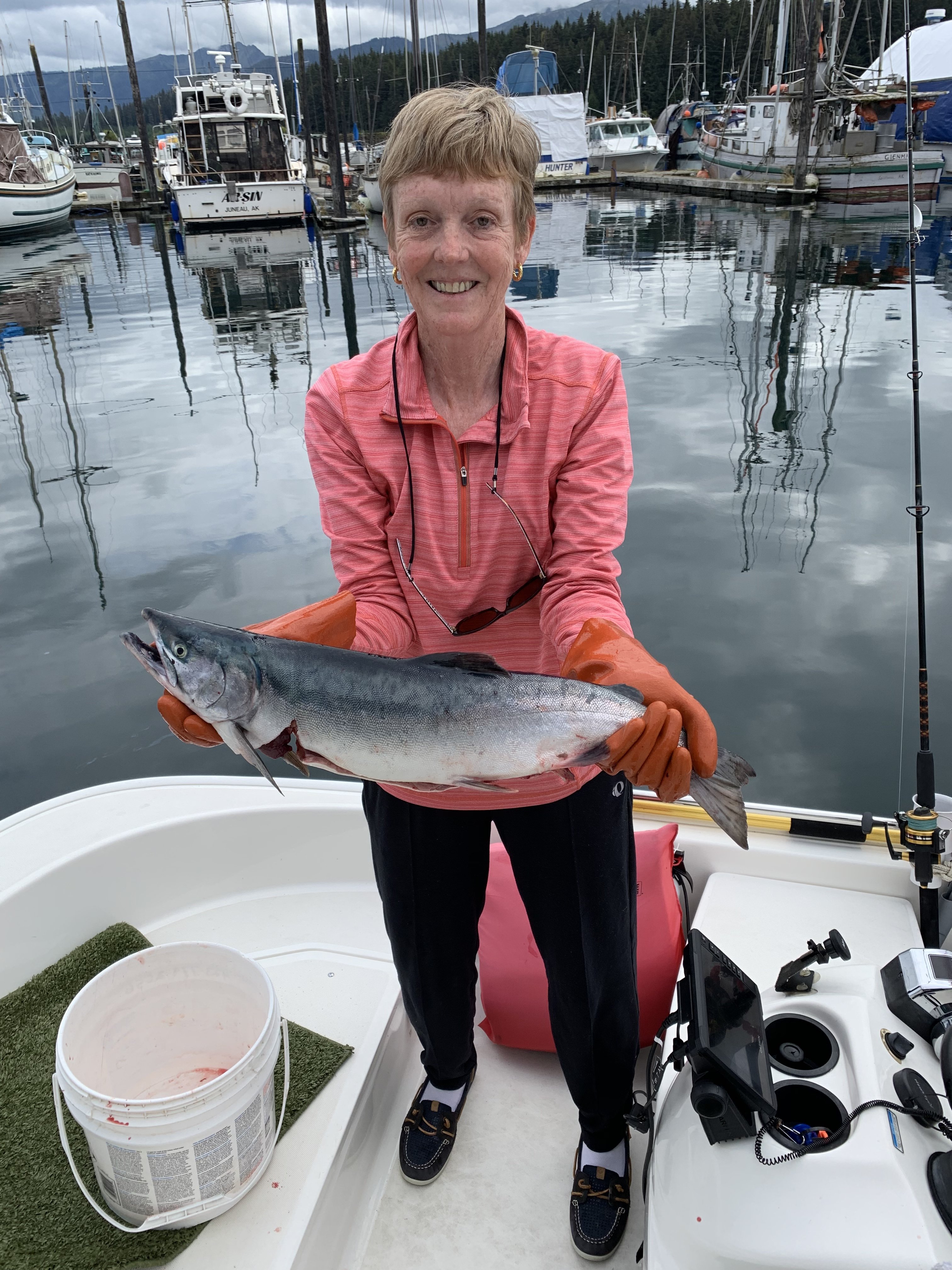 Hoonah was a great stop but with the weather improving it is time to move on. We will cross Icy Strait tomorrow for a week in Glacier Bay. Thanks for following along!