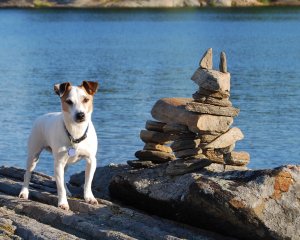 June 4 th., 1989: I walked into Larry and Jackie’s house to view the litter of puppies that their dog Buffy had whelped 4 weeks earlier. We had always admired Buffy, a stout, smart, and spirited Jack Russell. Our three year old Sheltie, Daisy, was in need of a companion. I had this wild idea of giving Susie a puppy as a 4 th of July surprise. As soon as I walked into the Freeman’s living room, one little male puppy came tottering over to me. Jackie said that some of the pups had already been spoken for but this little guy was still looking for a home. I guess you could say he picked me.

July 4 th, 1989: Slipping out of the house at 8:00 AM, I eagerly dash down the street to the Freeman’s house. Jackie has the pup ready to go and I scoop him up. As I walk through our front door with him tucked in my arms, I can tell from the look of surprise on Susie’s face, she had no idea about this Fourth of July present. Daisy, our Sheltie, was equally surprised. Both of them happily swarm our newest family member.

Our big task of the day was deciding on an appropriate name. We had just returned from a European bike trip. The leader of that trip was named Sebastian. We admired Sebastian and had enjoyed getting to know him. Sebastian seemed to be an appropriate name for our pup. Hours are spent fawning over this cute little bundle of energy. Homer and Nate , our two Amazon parrots, quickly became jealous of all this new attention being lavished on this small creature.

Our lives would never be the same from this point forward. 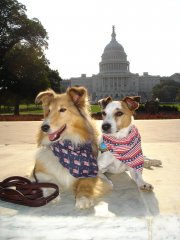 Over the years, Sebastian and Daisy attended obedience and agility classes, mountain hikes,and  camping trips. Both dogs traveled with us wherever we went and were inseparable from one another. Daisy quickly assumed the roll of Sebastian’s big sister. He gladly followed her on any new adventure. Sebastian especially enjoyed our boating expeditions aboard Idyll Time. 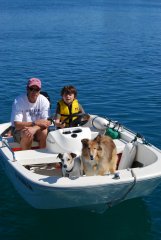 Exploring anchorages in our dinghy, Time Out, was a favorite pastime of his. He enjoyed life on the water, just not in it. He hated getting wet. 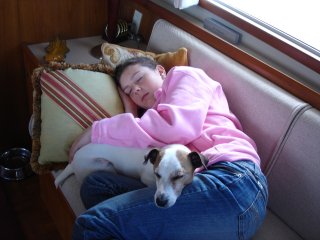 Feeding time became the highlight of Sebastian’s day. Treats were a major motivation for him. Visitors to the house were always amazed at his ability to jump high straight into the air on those strong Jack Russell legs as the excitement of dinner time overcame him.They were equally impressed at his speed of devouring his daily meal, frequently in under 30 seconds. He was a stomach on four legs. 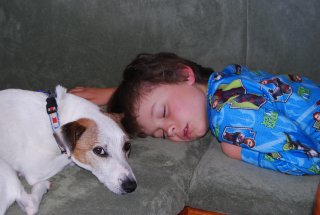 October 2015: Sebastian has developed a serious hacking cough that has us very worried. With his diminished eye sight due to cataracts, loss of hearing, and unsteady gait, his 16 year old world has become considerably smaller. He spends many hours napping in the sun or snuggled under his blanket. A trip to Vet and an X-ray reveals a well defined tumor in his right lung. This is the cause of his cough. The vet puts him on medicines but warns that a loss of appetite could be a side effect. After several days of no improvement and now a loss of appetite, we make a midnight run from the boat on the North Carolina coast to our home in Chattanooga, TN. Our vet sees him early the next morning. The outlook is sobering. He is given fluids to flush his kidneys along with a change in medicine to help his appetite. We are mildly optimistic.

Later that afternoon, as Jeff is putting on his workout clothes, Sebastian gets up out of bed and heads to the front door expecting to go along. We are amazed! The vet had told us to let him do whatever he wanted so he joins Jeff outside for one circuit of the workout. Just like old times, he quickly gobbles up three of his favorite dog biscuits. This is the first food he has eaten in several days.

2300 hours: Sebastian awakens us as we hear him struggling for air. His lungs are rapidly filling up with fluid. Jeff gives him oxygen and this seems to ease his labored breathing but confirms our worst fear. The end is in sight. Not wanting him to suffer any longer, a midnight trip to the vet is made. At 0040 hours on October, 24 th, 2015, we say our last goodbyes to our little boy as the vet eases him into his next life. He is now free to play with Daisy once again.