UPDATE: The Clipper Nassau has transited the Panama Canal. Her last stop was Golfito, Costa Rica where she offload some of the boats and loaded several more. She is now on her way to La Paz, Mexico.

Idyll Time is now on her way to the Pacific North West!

With confirmation that the Clipper Nassau, our transport ship, was nearing West Palm, we said our goodbyes to the remaining Krogens still at Sunset Bay Marina and took a slip at North Palm Beach Marina to ready the boat for shipping. With the help of AIS, we were able to monitor the travel of our ship. Sevenstar has also been great about sending us daily updates of her travel. Because of her draft, the Clipper Nassau can only enter the port at slack high tide. With that time nearing, we headed over to Peanut Island which is just across from the port at the Lake Worth Inlet in hopes of seeing her arrival. Sure enough precisely at slack high tide, we could see the Clipper Nassau making her way into the Inlet. The pilot boats were there to escort her into the port. It was exciting to finally see her close up. Boy is she big! 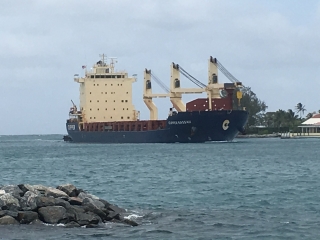 It will take three days to load all the boats on the top deck. Our agent at Sevenstar was able to furnish us with a load diagram. There will be a total of seventeen boats as cargo. It will be a full ship with the boats packed in like sardines. The next several days were spent removing canvas and any other loose items from the exterior decks. 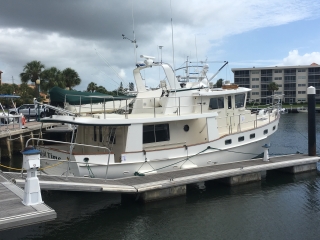 Next all items inside the cabin were stowed or secured in place. 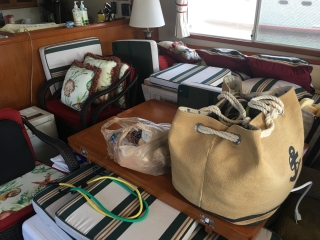 Most everything was placed in the saloon and bigger items bungeed together. We then taped all the cabinet doors shut. This is probably overkill but we are preparing for the worst and hoping for the best. The refrigerator and freezer are emptied and turned off. Our final task was to empty the water and black water tanks. Our fuel tanks are less than half full. Sevenstar ask that you carry only enough fuel to get you to the next port.
Idyll Time’s load appointment was scheduled for the third day. She will be loaded forth from last with the other two Krogen boats just ahead of her. The loading was challenging with high winds each day. Again the load master furnished daily updates. Each evening we would eagerly await the update fully expecting delays. Although there were many delays on day one and two, the crew worked overtime and managed to be back on schedule by each evening.
Our load day arrived with high winds and thunderstorms forecast for the afternoon. Jeff and I are both quite anxious about this whole process. Late morning, we checked in with the load master and were informed our load time had been pushed back several hours. As our new time neared, we pushed away from the docks and headed down to the port. Here we found our friends, Leigh and Wendy on the Krogen 42, circling in the harbor. 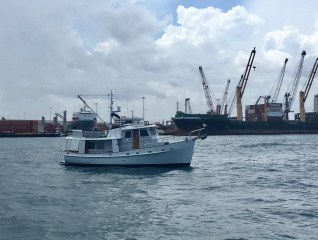 Sea Bear, the Krogen 54, was tied alongside the ship. This is not a good sign as both Krogens should have been loaded by now. The loading is now two hours behind schedule again. For the next hour we watched as Sea Bear was raised out of the water about ten feet only to be lowered back into the water. This was repeated many times. The two divers in the water adjust the sling straps each time. They are struggling to get her level. The sling position for the ship lift is not the same as when the boats are lifted out of water in a marina travel lift. Finally, Sea Bear seems to be level as they raise her out of the water. 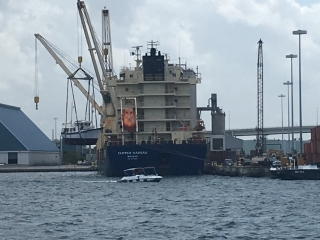 Once she is on the ship, the whole process is repeated for the Krogen 42 while we nervously circle in the ship turning basin. By now, thunderstorms are brewing on the horizon and the wind is gusting over 20 knots. As Forever Exploring is hoisted onto the deck, the loadmasters waves his arm signaling our turn. It is somewhat intimidating as we ease IT along side the huge ship. Two bright yellow loading straps are soon thrown to us for securing the bow and stern. Expecting to have only a few minutes to shut everything down, we rapidly work down our shutdown list. Our house batteries do not have a cutoff switch so Jeff has to undo the battery cables from the terminal block. We want IT to be totally asleep with no draw on the batteries for the next three weeks. For some reason the battery monitor in the pilot house is still powered up. How can that be! A 911 call to our electrical guru, Scotty, is quickly made. After discussing the problem Scotty feels that this monitor must be directly wired to the batteries. Jeff soon has it disconnected and IT is now sound asleep. With the shutdown complete, we search for the loading crew. Not a sole is in sight. Our guess is they must all have gone for 5:00 PM dinner. Meanwhile Idyll Time is being pressed hard against the side of the ship. We had purchased two ginormous inflatable fenders for just this situation. They are twice the size we would normally us but right now we are glad to have them.

The crew, looking rested and well fed, eventually returns and start attaching the bright yellow straps to every available cleat and hawse pipe. 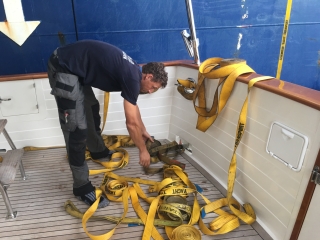 Two divers appear and are soon in the water. 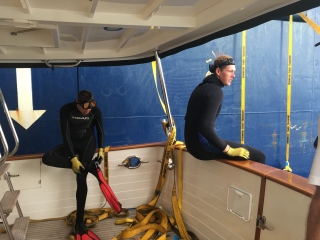 As they are doing this, our phone gives out a shrill warning. Tornado Warning for the next 30 minutes, take cover immediately! The radar indicates an ominous storm heading directly our way. We show this to the loadmaster but he seems unconcerned and continues on.

The pontoon taxi boat is soon on our stern to take us off.
For the next 15 minutes we hover in the pontoon boat as IT is raised and lowered in search of the level position.

We hold our breath each time praying that she will not be dropped. We continue to monitor the radar in hopes that they will get IT on the ship before this storm arrives. 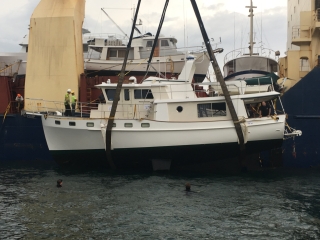 Soon she is being carefully swung into place on the port side alongside the rear crane. 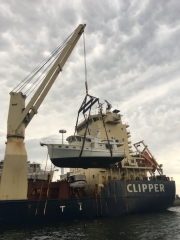 All three Krogen boats are nestled together. A mini Krogen Rendezvous?
Heading back to the marina, we are greeted by two other couples who are last to load. Their loading has been delayed until tomorrow. Although our loading was quite chaotic, everything worked out in the end. We feel fortunate to not have been damaged nor delayed another day.
We now enter the second phase of our PNW adventure. Our 24 ft RV is soon loaded with food, boat supplies, and our two birds, Nate and Primo for our 3500 mile trip to Vancouver Island. We can only hope that Idyll Time has a safe journey to British Columbia. Just today the Weather Channel is forecasting the possibility of an early season Hurricane for the eastern Pacific Ocean off the coast of Mexico, exactly where IT is headed. It will be good to see her safe and sound in Victoria’s harbor three weeks from now.
by itadmin