Will we cross Cape Caution today? This 40 mile open water passage around the Cape is one of two open ocean passages on our way to Alaska. This transit can be very challenging with steep confused seas that stack up due to a rapid shelving of the ocean bottom. The 4 am forecast calls for three foot seas on a 10 second period and light winds. The window to cross for today is the best of the next five days. We have one unresolved but very important issue. Our insurance prevents us from crossing 51 degrees latitude until tomorrow. 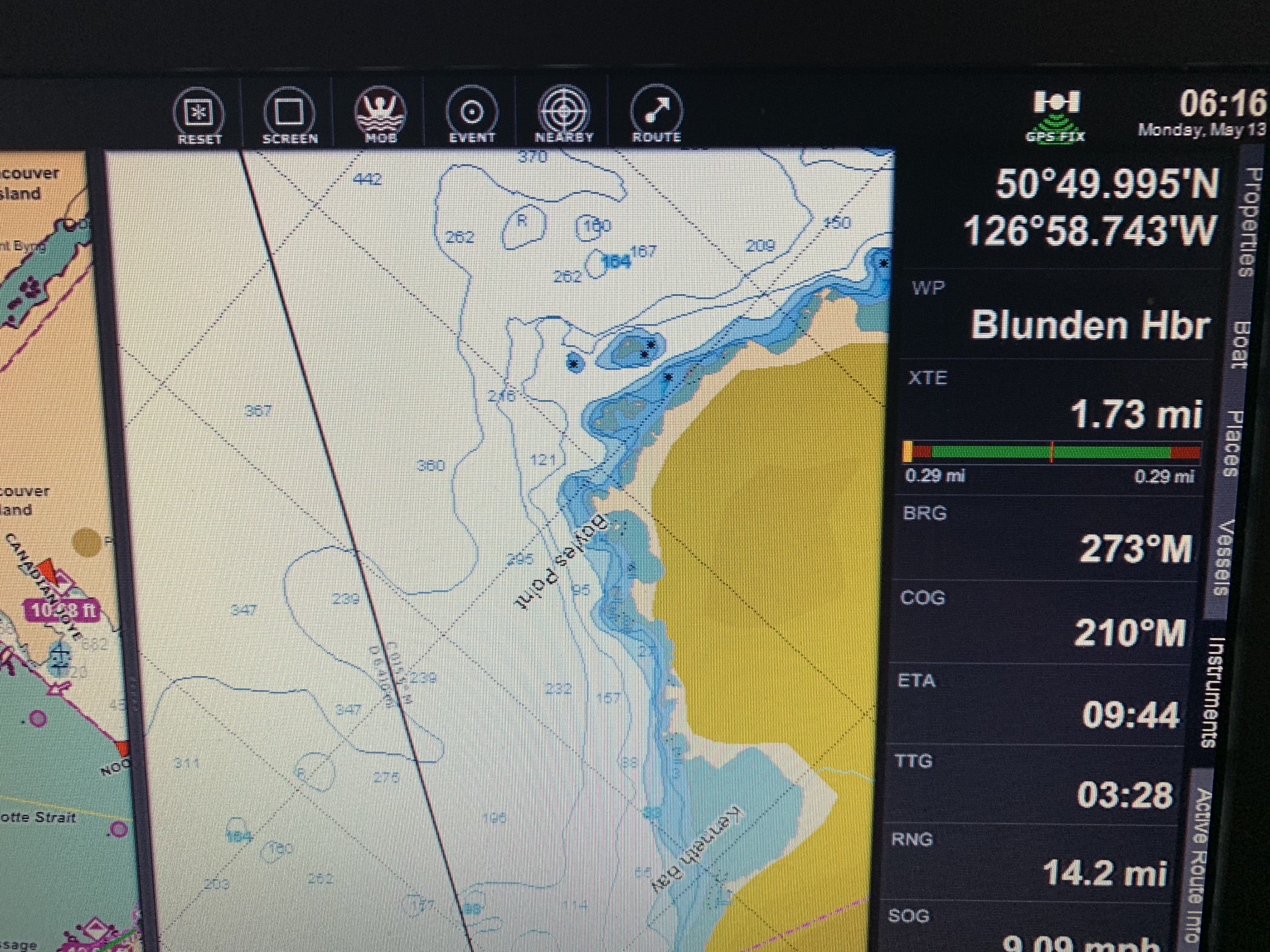 We called the insurance company last week asking for a waiver. It is usually not a problem but underwriter approval is needed. On Friday, Alicia said she should have approval by Monday AM ( she is on the east coast 3 hours ahead of us). We decide to proceed at first light as we are still a few hours away from our decision point of Blunden Harbor. If we don’t have approval by then we will anchor in Blunden and wait for another opportunity to cross. We leave several phone messages for Alicia over the next hour with no response. A call to the owner/agent on his cell is more productive. We learn that Alicia has called in sick today. The agent feels there is probably an email on Alicia’s computer for our approval. The problem is he doesn’t know her password. He promises to make this a priority and will get back with us shortly. In this part of the world cell service is spotty at best. Why do these things always happen to us!

Queen Charlotte Strait has a much nicer disposition this morning. The 4 foot seas we encountered yesterday have been replaced with a slight ripple. This is the day for crossing. We are in luck. The insurance agent calls back and gives us the green light. Cape Caution here we come! 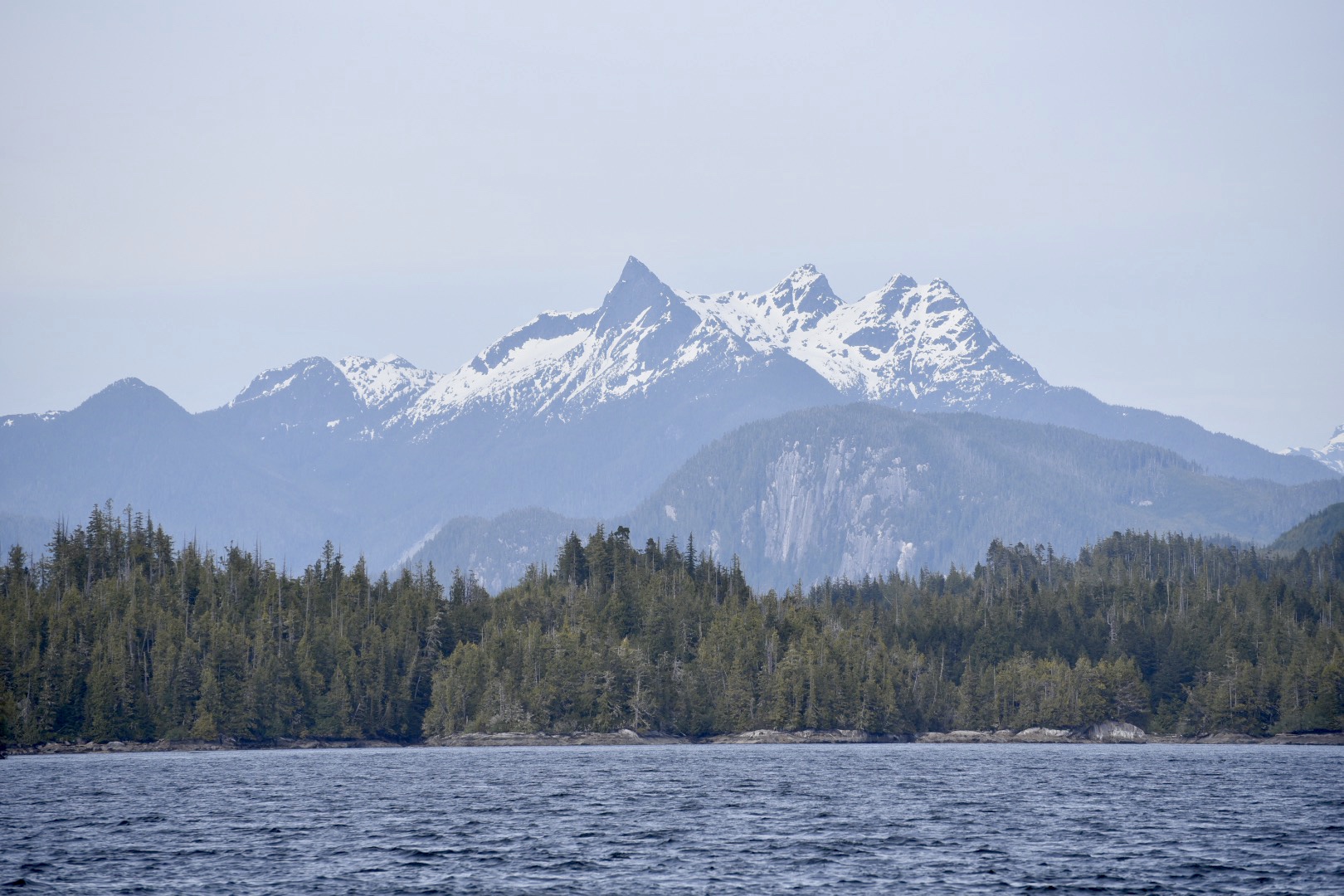 As we enter Queen Charlotte Sound, Idyll Time gently rises and falls over the three foot swells of the Pacific Ocean. The cruise ships Star Princess and Noorsdam are just ahead with their several thousand passengers on their way to Ketchikan. We have smooth seas the entire 40 mile trip. The crossing could not have been any better. It’s nice to have one of the most difficult portions of the trip behind us.

The Slow Boat group is still ahead of us and checking the AIS, we see they have anchored in Fury Cove which is the most popular anchorage after crossing. We decide to avoid the crowded anchorage and try a new spot. After winding our way around the numerous islets, we find only one other boat in the spacious Fry Pan Bay.

Deciding to spend two nights at this anchorage, we are out the next morning in the light rain for some dinghy exploration. Seven miles up Darby Channel is Dawson’s Landing General Store. 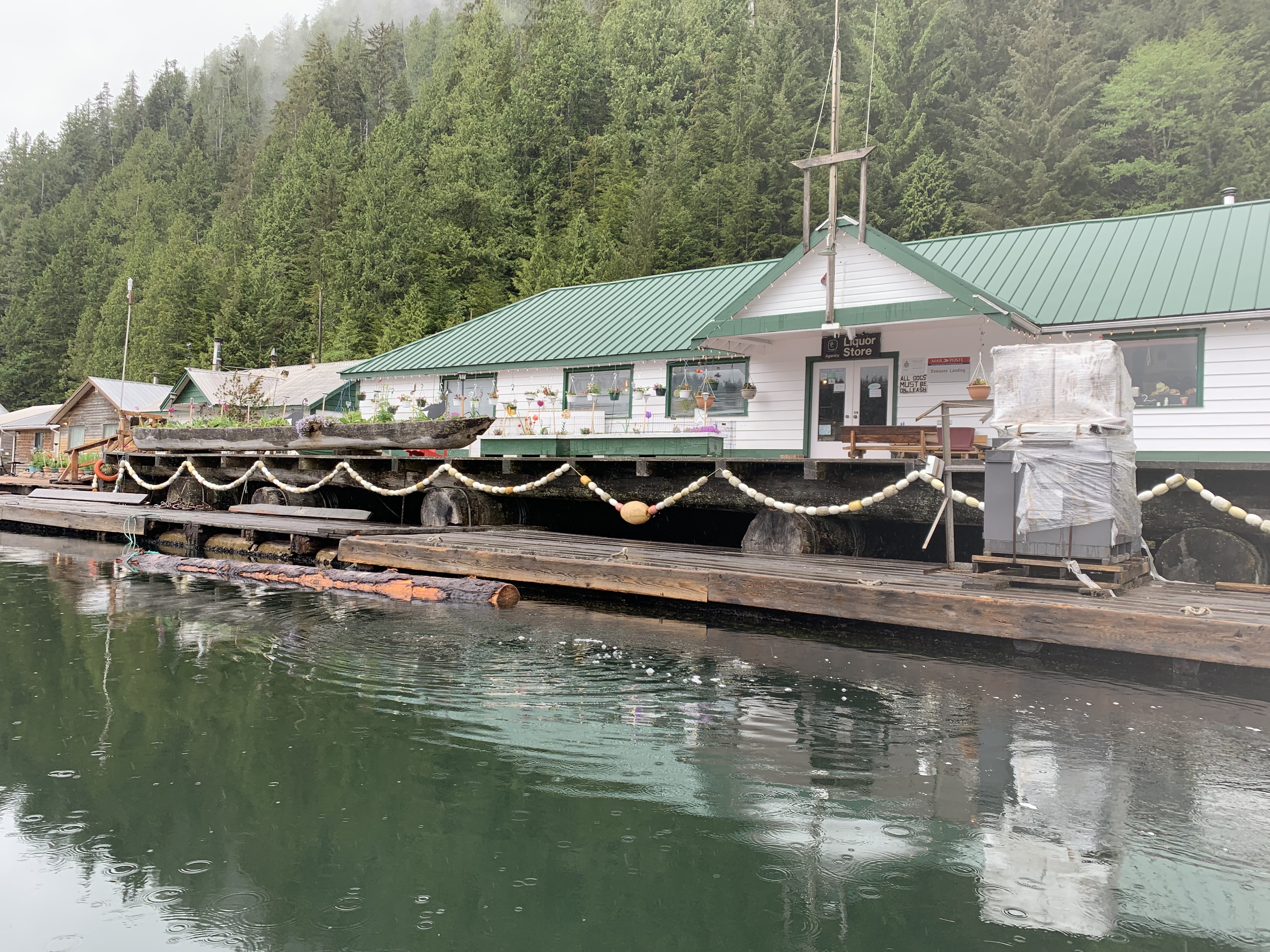 This old time general store has been serving fishermen along the Rivers Inlet area for over 65 years. After tying up at the well worn floating dock, we venture inside to meet Nola and Rob, who have run the store for the past 35 years. Nola’s parents started the store in 1956. Next to the store are several float houses. 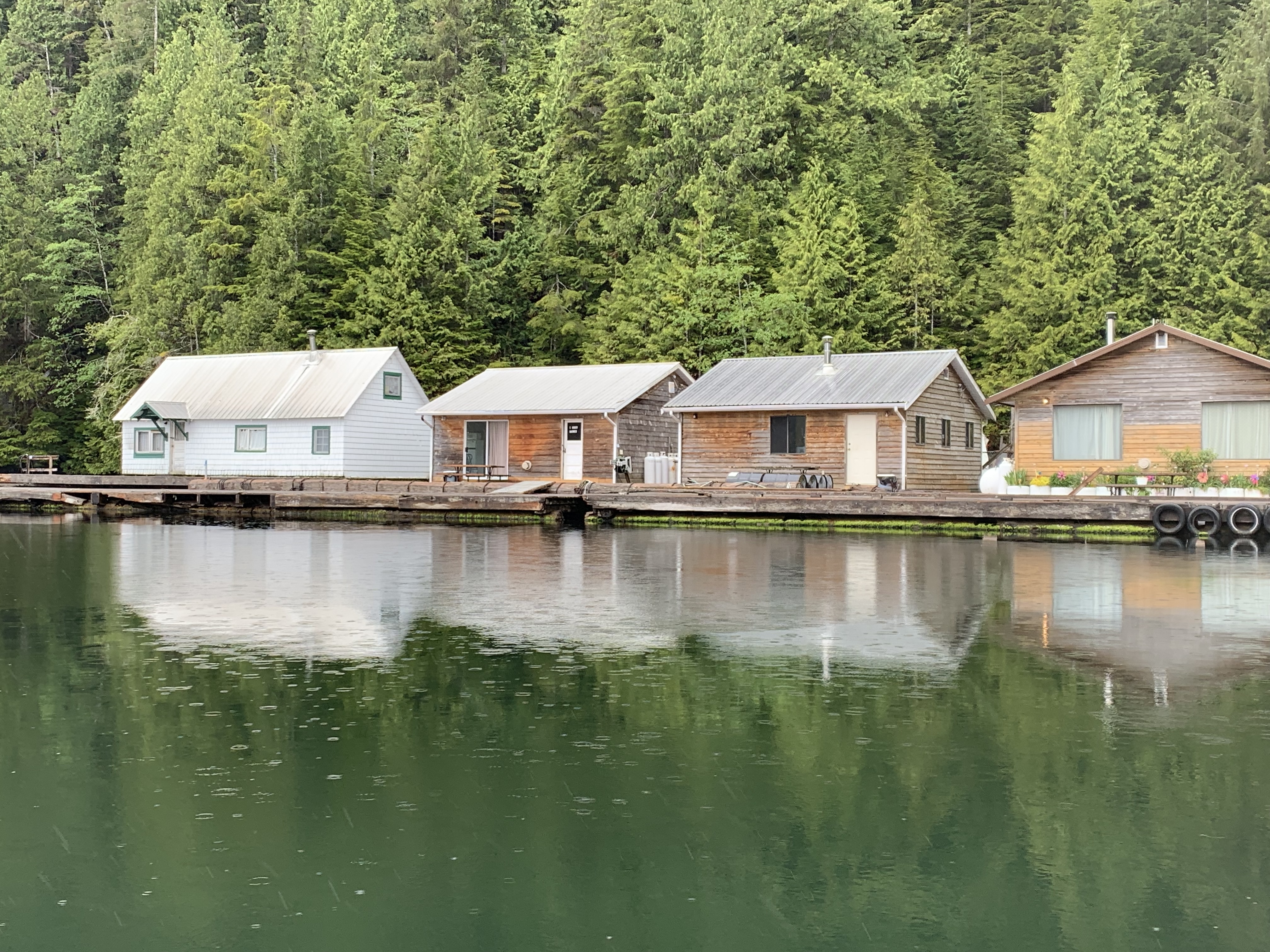 They are all empty now as the salmon runs don’t start until late July. With no roads, this is true wilderness living. The store is resupplied with fresh produce via float plane every two weeks and other goods come by barge.

As we are returning down Darby Channel, we spot some movement ashore. There are two young brown bears along the rocky ledge. We ease over in the dinghy to get a closer look. 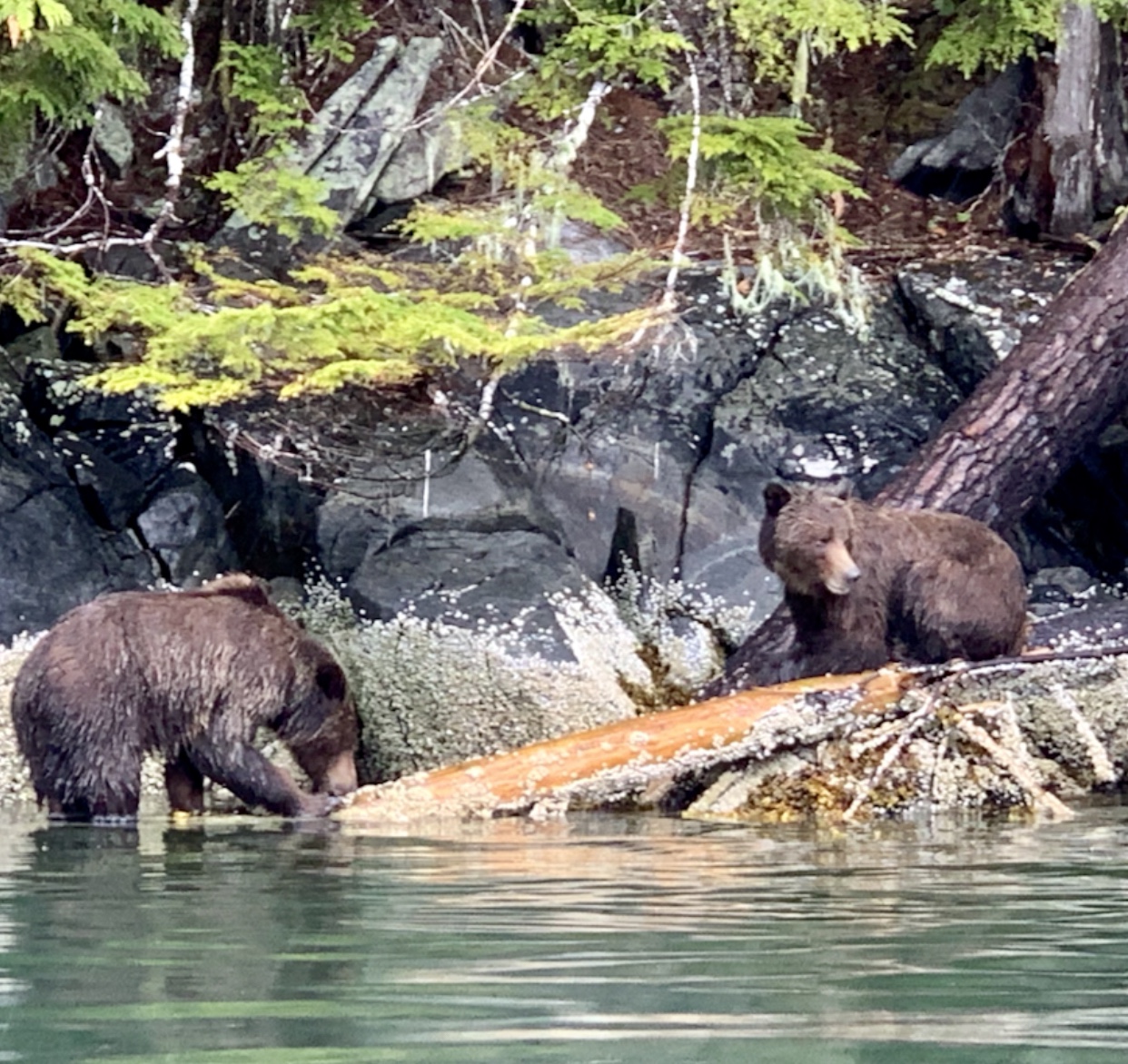 They are feeding on mussels along the banks. The bears show little interest in our presence and continue foraging. We watch while one scoops up a huge clump of mussels with his massive claws and disappears into the woods. Seeing the bears made the cold wet dinghy ride much more bearable (pun intended). 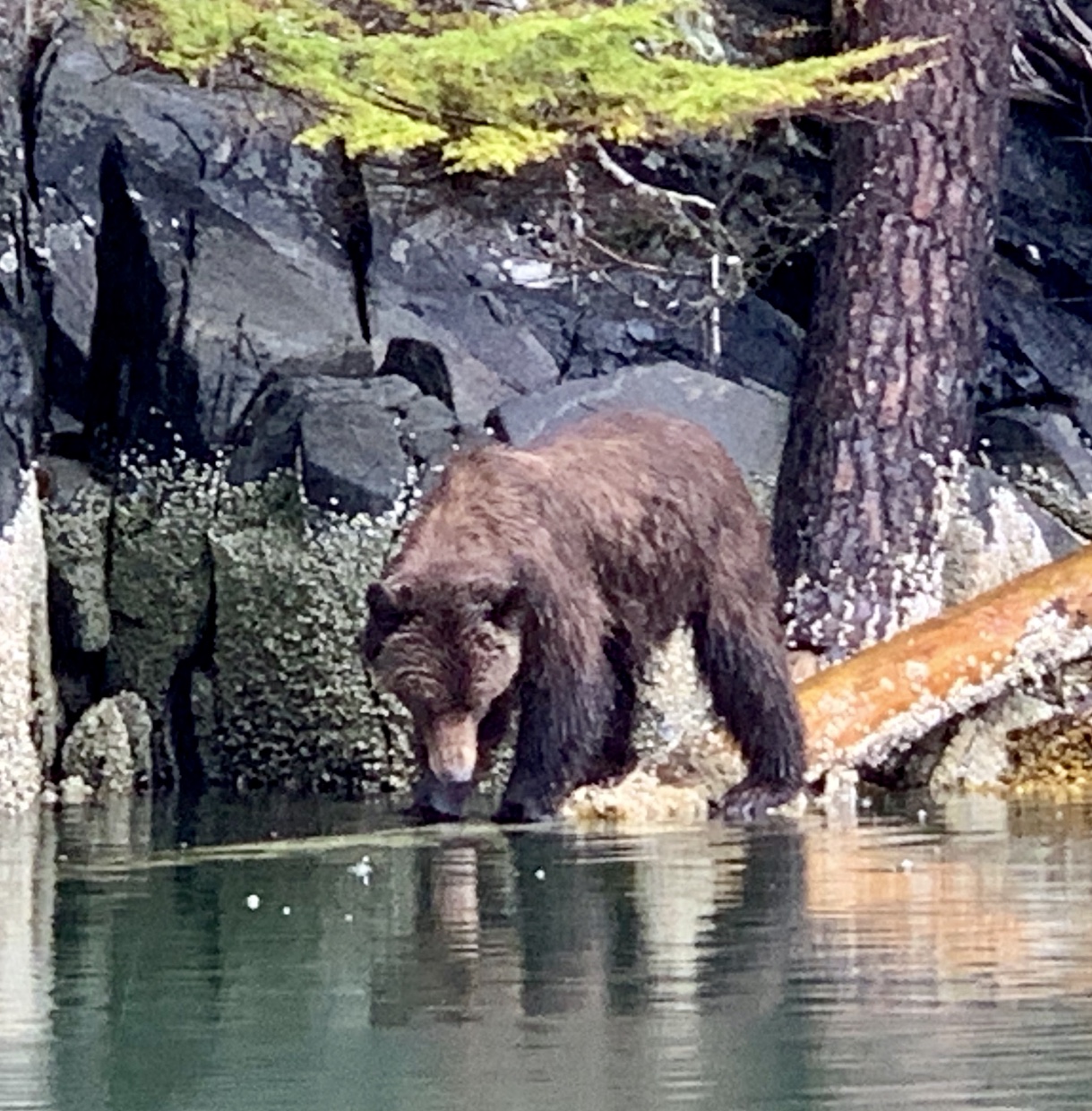 Only 257 miles to the Alaska Border. Thanks for following along.