Our first task after leaving the Philbrooks Boatyard is to “Round the Flag”. We came into Canada under a work order in order to avoid paying any of the Canadian taxes. After the work is done, we must go directly back into the United States without doing any pleasure cruising. The US/Canadian border is only 10 miles away so it is a pretty easy process. With our Nexus cards, a phone call to US Customs once we cross the border has us cleared back into the U. S. We turn the flag as it is called and enter Canada under a cruising permit. Another 600 miles and we will be to the Alaska border. 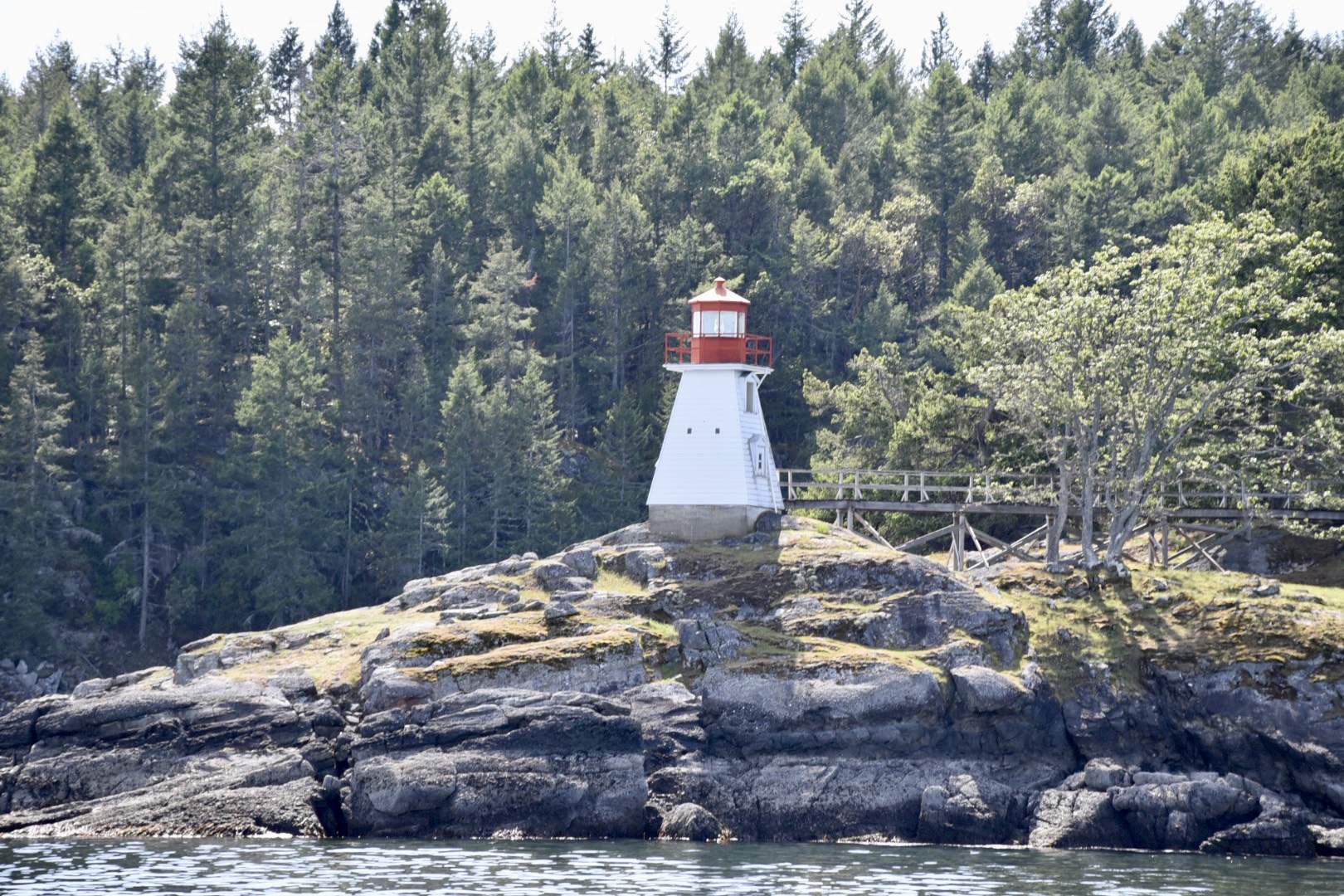 Just after leaving Sidney someone hails us on the VHF. It is Julie on Ocean Psalm, a Krogen 42. They are just behind us heading to Alaska also. We know of three other Krogen 42’s about two weeks ahead so we won’t be alone in Alaska.

We have a beautiful cruise through the Gulf Islands and anchor in Clam Bay on Thetis Island our first evening. It is nice to be on the hook and away from the boatyard. We up anchor the next morning at 6:30 am in order to reach Dodd Narrows at slack tide. This is one of several “gateways” where the currents can reach up to 11 knots and must be transited near slack. After an uneventful passage, we make a brief touch and go in Nanaimo stopping to resupply our fresh fruits and vegetables. Canada has strict import/export rules so we weren’t able to have much aboard when we crossed the border. We are again fortunate to have calm seas for the 110 miles up the Strait of Georgia. Leaving Nanaimo, we must hug the coastline so as not to intrude upon a military operation area known as Whiskey Golf which is active today. They test torpedos here so we don’t want to stray. We hear over the VHF as another boater is given a warning to turn around as he has veered inside these military boundaries. We are rewarded with stunning scenery of snow capped mountain peaks on both Vancouver Island and the mainland coastline. 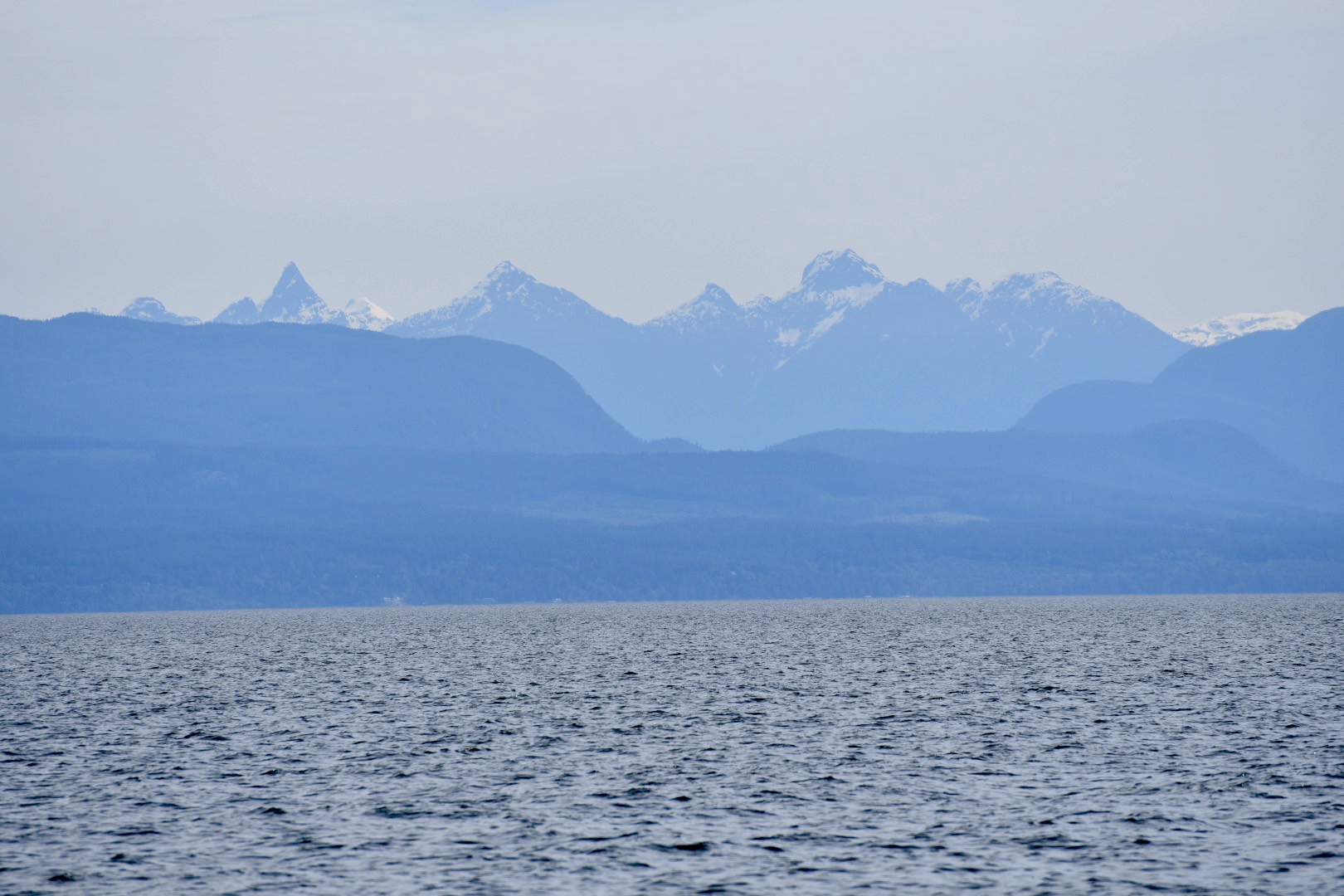 To reach our anchorage of Waiatt Bay we must transit Beasley Passage which has rapids on both the ebb and flood of up to 11 knots. We time our arrival at slack by stopping at a nearby anchorage of Village Bay for a two hour lunch break. Our guide book says that Village Bay at one time housed a nudist colony. Jeff is disappointed to learn the colony is no longer here. At 52 degrees and a brisk wind, I doubt many nudists would have been wandering about anyways.

After weaving our way through the narrow rocky passage to Waiatt Bay at low tide, we can now relax. This anchorage, which is part of the Octopus Islands Marine Park, has become one of our favorites over the past few years. The dinghy is quickly deployed for a visit to the old cabin on one of the rocky islands. Boaters have been visiting this windowless and doorless cabin for many years and have memorialized visits by leaving signboards, burgees, and other paraphernalia inscribed with the boat and crews name. After some searching, we were able to locate our driftwood memento from 2017 and add a newly created sign. 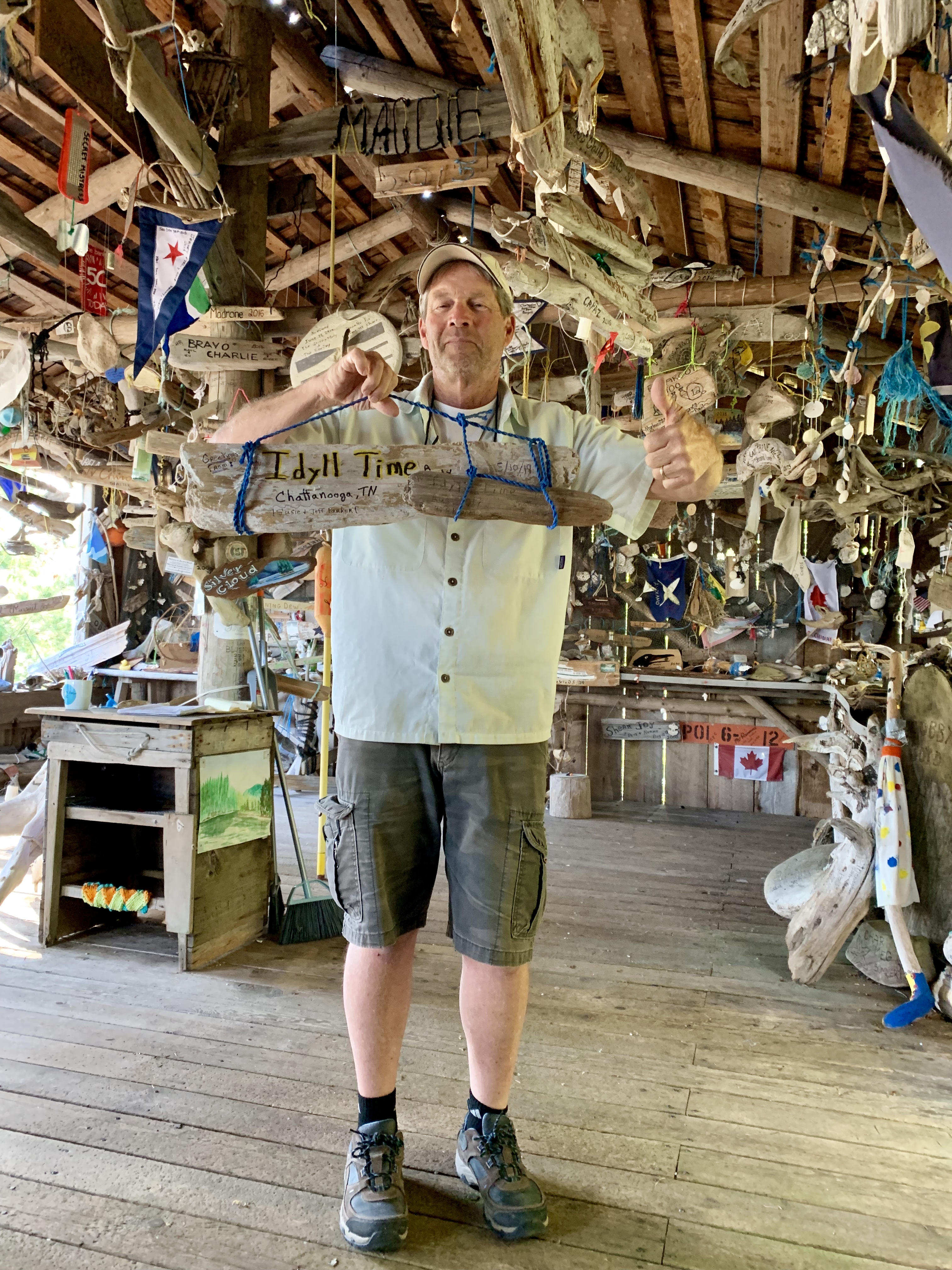 It is another early morning as we depart the narrow passage leading from Waiatt Bay to the Upper Rapids which are slack at 6 am. We pass through the rapids uneventfully and enter Johnstone Strait. We encounter a stiff 20 knot headwind making for lumpy conditions. Luckily the wind and current are both running the same direction. This Strait can get very ugly when the ebb currents are opposing the prevailing NW winds. We consider bailing at several spots, but knowing the wind is suppose to calm down later this morning, we push on. 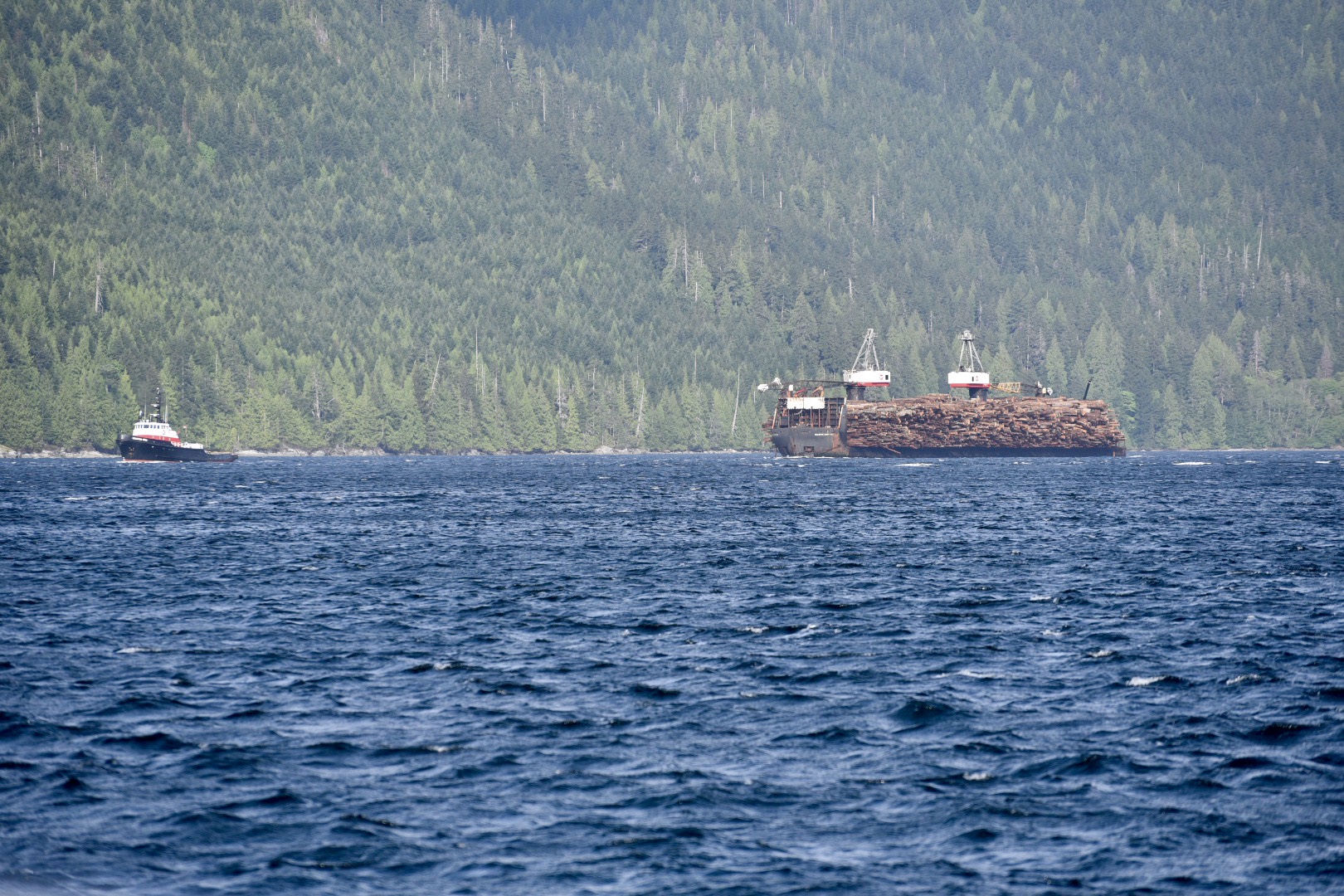 Our travel plans remain fluid all day as we are checking weather forecast. Seeing a possible window to cross Cape Caution tomorrow, we decide to push on to Blunden Harbour, a good staging anchorage for the crossing. We are rewarded with our first Humpback Whale sighting of the season in Queen Charlotte Strait. The seas continue to build.
Checking on AIS, we see the Slowboat flotilla has anchored in Blunden. The Slowboat Guide team lead a group of boats each year up to Alaska. We have followed their blogs for the past few years. It looks like they are also hoping to cross Cape Caution tomorrow. With the building seas and possibly crowed anchorage in Blunden we change plans once again and head towards the nearby anchorage of Napier Bay in the Broughton archipelago. The calm waters of Wells Passage are a welcome site. It was starting to get pretty rough out in the Strait. The anchor is down at 6 pm. It was a very long and tiring 102 mile day.

We will be up at 4 am tomorrow to check the latest weather forecast for a possible crossing of Cape Caution. Stay tuned!